What is the net direction of dipole moment in $\ce{F2O}$ molecule?

After going through a standard book on inorganic chemistry , I found the answer. The direction of dipole moment in $F_2O$ is just reversed as in the case of $NF_3$ i.e from oxygen atom towards fluorine atoms. Reference: Concise Inorganic Chemistry 5th edition by J.D.LEE; Chapter "CHEMICAL BONDING" topic "APPLICATION OF DIPOLE MOMENT".

In H2O, as O is more electronegative than hydrogen, the resultant bond dipole is towards O, which means both the lone pair and bond pair dipole are acting in the same direction and the dipole moment of H2O is high. (1.84 D)

On the other hand, 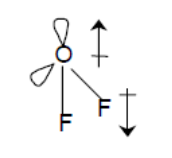 In the case of F2O, the bond dipole is acting towards fluorine, so in F2O the lone pair and bond pair dipole are acting in opposition resulting in a low dipole (0.3 D)

Not the answer you're looking for? Browse other questions tagged inorganic-chemistry molecular-structure dipole or ask your own question.