After investigating what makes the persistent radical TEMPO stable, I was wondering if another compound which is more feasible for my needs would be comparable to it.

Would oxidizing 2,2’-dimethyl-diphenylamine result in a compound similar to TEMPO? It will have an Aminoxyl group and have the steric hindrance of the methyl group next to it. By similar I mean if it will have a stable radical in the aminoxyl group.

Aminoxyl (trivial name: a nitroxyl radical or a nitroxide) denotes a radical functional group with general structure $\ce{R2N–O^•}$. It is well known that sterically unhindered aminoxyls baring $\alpha$‐hydrogens are unstable and undergo rapid disproportionation to nitrones and hydroxylamines (Ref.1: A new mechanism for the decomposition of $\alpha$‐hydrogen nitroxides is proposed). For example, decomposition of one of such compound is displayed below (The scheme is from Ref.1):

Sterically hindered aminoxyls without $\alpha$‐hydrogens such as TEMPO are stable radicals. However, it is not clear that steric hindrance at carbon $\alpha$ to nitrogen atom is important in the mechanism. Yet, the lone pair of electrons on nitrogen has played a significant role in the mechanism (Ref.1). Therefore, I speculate that 2,2'-dimethyldiphenylamine, when oxidized to relevant aminoxyl radical, may not be as effective as TEMPO, mainly due to the delocalization of the lone pair of electrons on nitrogen between two 2-methylphenyl groups.

Nonetheless, there are few available aminoxyl radicals, which are more efficient than TEMPO (Both following images are from Ref.2): 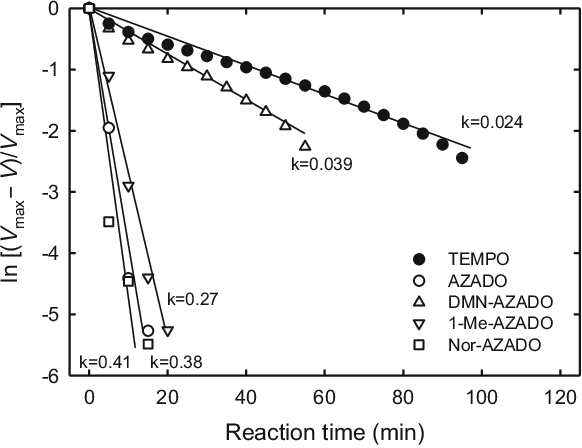 There is also some comparative work has been done in Ref.3, which also showed the superiority of other N-oxyl radicals over TEMPO (Synthetic procedure to prepare Nor-AZADO has been given in the reference; see attached PDF).

Not the answer you're looking for? Browse other questions tagged organic-chemistry synthesis radicals organic-oxidation or ask your own question.

29
Why are DCM and chloroform so resistant towards nucleophilic substitution?
4
How to define the atom numbers in unsaturated hydrocarbons correctly according to IUPAC?
11
Does an acetal give a positive Tollens test?
7
Evaluation of a synthesis from aspirin to paracetamol from this Nile Red video
19
Why doesn't TEMPO react with itself?
4
Newman projections: how to tell which groups are bulkiest to determine what is the most stable conformation?
3
Deciding which group twists out of the plane when ortho effect takes place