Why is the Chlorine missing an electron in Chlorine Monoxide?

I was asked to draw the lewis-dot structure for ClO and I drew this:

The correct answer is apparently this:

How would I know that? In the first example, all the formal charges are zero, but in the second, Oxygen has -1 and Chlorine has +1.

In fact the unpaired electron belongs neither to Cl nor to O, but to a molecular orbital spread over both atoms [but not equally: see below]. The Lewis structure is simply not a complete representation of what is going on. (And for what it's worth wikipedia gives the same Lewis structure you drew: http://en.wikipedia.org/wiki/Chlorine_monoxide)

Edit: Actually it seems the highest occupied molecular orbital (where the unpaired electron is) is mostly localized on the oxygen atom. 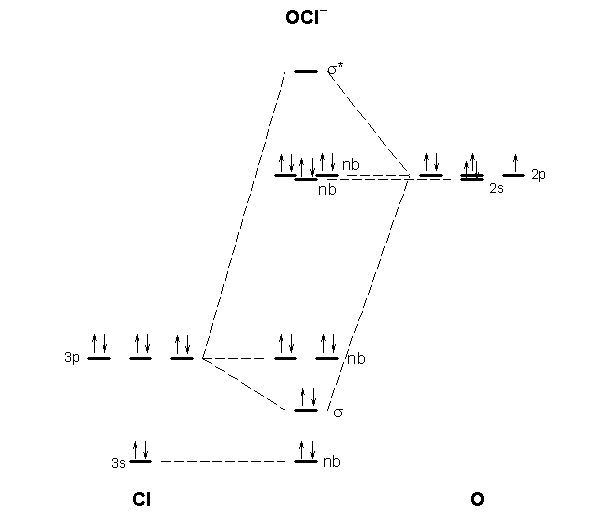 That is to say, your structure is more correct than the one in the answer key. However the justification involves molecular orbital arguments outside the scope of a general chemistry course.

Another edit: I too like your argument about formal charges and would accept it as a justification that the unpaired electron belongs to O rather than to Cl.

Not the answer you're looking for? Browse other questions tagged lewis-structure formal-charge or ask your own question.