But among the other two, i.e. ortho and para, shouldn't ortho be more acidic as it will cause ortho effect? But according to my book and the data I found online:

The problem in ortho-aminobenzoic acid is that the acidic hydrogen of carboxylic group is H-bonded with the lone pair of nitrogen in amino group. As a result it is more difficult to extract it compare to that in para-aminobenzoic acid since the H-bond must also be broken during acid-base reaction. Para-aminobenzoic acid does not have a H-bond due to the distance between the two groups. 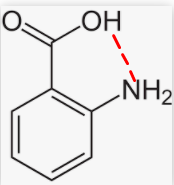 I would like to add that since the hydrogen of the $\ce{-COOH}$ group is more acidic and $\ce{N}$ has a lone pair. This is why H-bond occurs with $\ce{-NH2}$ group as electron donor and not the other way round.

Also, I presume that by ortho effect you intended to tell that due to repulsion of $\ce{-NH2}$ group $\ce{-COOH}$ group would go out of the plane. However, as we have seen, it is difficult as it is already H-bonded with the nitrogen atom and moving out of the plane would put strain into the H-bond. Moreover, the repulsion by $\ce{-NH2}$ group is not too intense so it would (in most part) avoid the strain.

Not the answer you're looking for? Browse other questions tagged organic-chemistry acid-base aromatic-compounds carbonyl-compounds amines or ask your own question.

20
Comparing acidities of substituted and aromatic carboxylic acids
24
Electrophilic Aromatic Substitution: Are protonated OH-groups ortho-/para- or meta-directing?
33
Acidity of substituted phenols
5
Electron withdrawing groups and acidity
18
Acidity order of nitrophenols
19
Are there any examples of activating meta directors?
4
Why is cysteine more acidic than serine?
2
Effect of chloromethyl substituent vs methyl substituent on yields of nitration
2
Why acidity of p-methoxybenzoic acid is more acidic than p-hydroxybenzoic acid?
0
Para effects on substituents in aromatic compounds