I understand that the molecule $\ce{IBrF2}$ is T-shaped, with three ligand atoms and two non-bonding pairs.

However, how many unique bond angles can this molecule exhibit?

However, can't we also arrange this molecule as to have this axial arrangement of atoms: $\ce{Br-I-F}$?

My professor argues that this arrangement is impossible due to van der Waals repulsions. I suppose this makes sense; the two lone-pairs $\ce{<->}$ large bromine atom repulsions would make this shape unfavorable.

Impossible? I'm not sure about that. Dammit, nothing in chemistry is impossible. 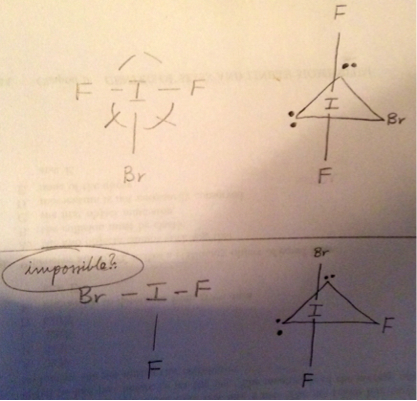 I suspect the molecule $\ce{IBrF2}$ does not exist, and is purely conjectural (theoretical) at this point. If it ever had been synthesized or observed, it would have made the cover of Science or Nature. "First neutral ternary interhalogen compound found!" (A handful of anionic ternary interhalogen species are known.)

But my hunch is that, if the molecule did exist, the conformation your professor describes would be favored because of symmetry. Having the same atom in (roughly) opposite directions maximizes the amount of coupling because the opposite orbitals have same energy and can combine better than if it were two different atoms. Hence greater stabilization.

Side note: why are axial bonds longer than equatorial bonds?

This is true in binary compounds like $\ce{PCl5}$, and apparently a sufficient explanation is that each axial chlorine wants to avoid 3 other chlorines at 90$^\circ$ angles, while the equatorial chlorines have 2 at 90$^\circ$ but the other 2 are further away anyway, at 120$^\circ$. In other words, if you just want to maximize the average Cl-Cl distance, subject to the constraint that the P-Cl distance is reasonable, you're better off with a slightly elongated bipyramid instead of one inscribed in a sphere.

In the hypothetical $\ce{IBrF2}$ of course the axial I-F bond would be shorter than the "equatorial" I-Br bond, since Br is a bigger atom.

7
Does symmetry lower the energy of molecules?

9
What does ‚Äúgenerally octahedral‚Äù mean?
7
How does VSEPR theory explain the formation of different bond angles in PCl‚ÇÖ?
23
PBP vs TBP geometry?
9
Why an asymmetric geometry with sp3d and sp3d3 hybridization?
1
Structure of OSF4
3
Breaking degeneracy in phosphorus pentachloride
3
AB5E type molecule