Are phenyl and allyl groups in prop-2-enylbenzene coplanar?

Wouldn't C1 and C2 in prop-2-enylbenzene be on the same plane as that of the phenyl ring, right? If the double bond connected to C2 was between it and C1, they would be, but is it correct that now they're both planar, but on different planes?

Part of the problem with the question is geometry. Any two points always form a plane. What I suspect you mean is "is the allyl double bond in the same plane as the benzene ring?" in which case the answer is probably not.

To make the situation clearer here is a different numbering of the atoms in the allyl benzene molecule:

The question I think you intended is whether the 2* and 3* bond is in the same plane as the benzene ring.

There is no chemical or geometric reason why it would be. the 1-1* bond and the 1-2 bonds will freely rotate so there is no bond-related force driving the orientation of the 2-3 double bond. to illustrate here is a 3D view of one possible configuration: 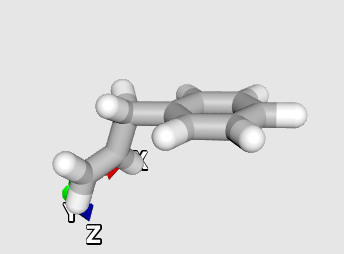 I say one possible configuration as it is likely that the barrier to rotation of those two bonds is small and, at room temperature in the liquid, the molecule will explore all the possible configurations (it might be different in a solid crystal where packing forces between units might lead to one being favoured).

In short: there is no reason to suppose the double bond and the benzene ring will be in the same plane because the two single bonds connecting it to the ring will freely rotate.

Not the answer you're looking for? Browse other questions tagged organic-chemistry aromatic-compounds molecular-structure or ask your own question.

1
What is the difference between resonance and π conjugation

1
How Fittig reaction gives good yield if phenyl cations are unstable?
2
Is the VSEPR theory correct in determining the bond angle of sulfur dioxide?
2
Planarity of given molecules in all conformations
1
Is PCl5 really trigonal bipyramidal in shape?
1
If all bond angles in AX₃ are the same, then which of the following are correct conclusions about AX₃?
3
Why does there need to be a planar intermediate in 2,2'-dibromobiphenyl when one of the phenyl groups rotates?