While documenting myself on the detectors used in HPLC, I came across one that I did not know: ELSD.

I understood that the sample with the mobile phase was nebulized at the column outlet but I do not understand what is measured next.

Could you clarify this for me?

ELSD is an acronym for Evaporative Light Scattering Detector. It is used as a quasi-universal detector for HPLC.

The first step is the nebulization of the column effluents with a dry gas as you have mentioned. If the column effluents contain any non-volatile analyte, then those will form minute particles. The mintue particles become suspended in the gas stream and form an aerosol. The gas stream is made to pass through a focused light beam (usually a diode laser) which is perpendicular to the flow direction.

If aersol is present, the light will be scattered, and can be detected/analysed by a detector photodiode which is placed perpendicular to both the light beam and flow direction.

There is a nice picture that I got from this site: 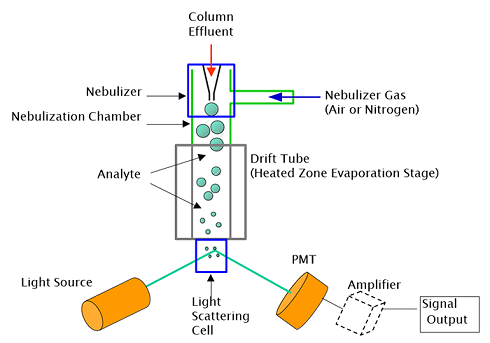 Not the answer you're looking for? Browse other questions tagged analytical-chemistry chromatography or ask your own question.

2
Yeast Fermentation with YPD + Apple Juice
4
Reverse Phase Chromatography
2
Internal Standard Methodology
4
Could chromatography induce a conformational change?
2
Can we use HPLC to purify an organic reaction product?
2
Why can zwitterions be difficult detect by HPLC-MS?
1
Theoretical plates in Plate theory of chromatography
2
How do I interpret the results of this chromatogram and does it tell me about the compounds' polarities?
3
Normal phase dead time marker