Rationalising the order of reactivity of carbonyl compounds towards nucleophiles

This is immediately following ron's answer from Why is a ketone more nucleophilic than an ester?

One of the most simplest questions you can ask, how can you rationalise the order of reactivity towards nucleophiles, which is given as

There might be many concepts out there, that explain this order, the above linked question could only halfway satisfactory answer it in the kind of generality I am looking for.

I am looking here for any model that can be used to explain this reactivity.

I will also later on post an answer to this question using quantum chemical calculations, trying to generalise from example. The key points that will be included are stated in ron's answer linked above.

I like Martin's posts, they make me think - and that is always a good thing. Here is where my thinking has taken me:

While I agree with most of this, I do strongly disagree with the last statement. Which I will hopefully be able to prove soon.

In the meantime I welcome everyone to share their thoughts on the matter.

Here is my "old school" explanation. 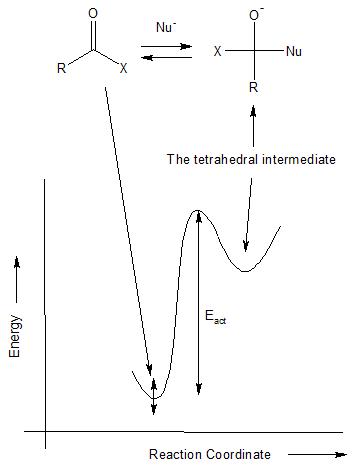 Below are the resonance structures we can draw for our carbonyl compound.

Let's start by comparing the ester to the amide. In both cases structure III involves a 2p-2p pi bond, but the resultant positive charge is placed on oxygen when we start with the ester and on nitrogen when we start with the amide. Clearly, for electronegativity reasons, the amide case is better with the positive charge on the less electronegative amide nitrogen. Our prediction: the amide is more stabilized than the ester and therefor should be the slower reacting of the two.

There's really no difference between the ester and carboxylic acid in terms of resonance structure III contribution so we would expect them to have similar reactivity towards a nucleophile.

Let's compare the ester to the anhydride. Resonance structure III is equally effective for both compounds, BUT, there are two carbonyls in the anhydride for the oxygen to interact with. Therefor, the oxygen will only be half as effective at stabilizing any one anhydride carbonyl as it was for the ester carbonyl.

For the ketone, our resonance structure III has a slightly different look, it involves hyperconjugation as shown in the following figure.

For this approach I am basically employing Frontier Molecular Orbital Theory (FMO) to predict the reactivity of carbonyl compounds towards nucleophiles.

For the purpose of this explanation I have chosen water as nucleophile. In principle we are looking at the addition of an electron rich particle to an electron poor system. In this case, water will attack the positively polarised carbonyl carbon to form the tetrahedral reactive intermediate. The activation barrier of following step, i.e. dissociation of the leaving group (or proton for aldehydes and ketones), must be lower in energy, because otherwise the reaction will not proceed. It is therefore sufficient to look at only the initial step of the reaction, and more rigorous we can even only look at the ground state properties of the reactants.

In FMO theory there are basically three main observations:

The first point is fairly obvious and will not cause much change in the interaction of the two molecules.
The second point is also straight forward. In all carbonyl compounds the carbon will be carrying a (partial) positive charge, while the nucleophile will be having a (partial) negative charge. The third point is not so obvious. It can be expected, the LUMO of the carbonyl compound (electron poor carbon) and the HOMO of the nucleophile (electron rich) will interact to form the new bond. This will also be the strongest interaction. The opposite combination is also thinkable, but the energy difference between these orbitals will be much larger, as we will see. In other words, the closer the energy difference between these orbitals will be, the more attractive the interaction will be. Since we keep the nucleophile constant, we can predict a order of reactivity towards that one specific nucleophile based on the energy of the LUMO of the carbonyl compound. (This comparison will hold, even if we change the nucleophile.)

The following table assembles the energies of the frontier orbitals in $\mathrm{eV}$ as well as the most important partial natural atomic charges. As a model system, the ethyl substituted compounds $\ce{Et-CO-R}$ have been chosen. The calculations were performed with Gaussian09 Rev. D1 employing Becke's exchange functional in conjunction with Perdew's correlation functional. The density fitted def2-SVP basis set was used. For charges the Natural Bond Orbital (NBO) analysis was used.
For convenience I have not included any solvent, so these calculations assume gas phase, vacuum and absolute zero.

These kind of calculations cannot handle anions very well, so I have also omitted the carboxylate ion. For obvious reasons, I would say its tendency to react as an electrophile is negligible.

The HOMO of water is one of the lone pairs at oxygen, at $-6.35~\mathrm{eV}$. Correlating the LUMO energies from the table, the expected order of reactivity is $$\ce{acid~chloride > anhydride\approx aldehyde > ketone > acid\approx ester > amide}$$

With NBO we can look at localised orbitals, which all look very similar and also give very similar numerical results. The $\pi^*$ antibonding LUMO is composed of $67\pm2\%$ carbon $\ce{p}$ AO and $33\pm2\%$ oxygen $\ce{p}$ AO for all compounds. Here are the FMO shown for the anhydride.

Unfortunately I was currently not able to find any reaction barriers for this approach. My educated guess is, that the chosen nucleophile is too weak to coordinate to this compound in the gas phase. I believe I will have to include a solvent for transition state stabilisation, but I am not sure if I can afford the calculations at the moment.

There are several different things going on here in this rather long series. I will go through them in turn.

These are going to be reactive because they have a good leaving group. Chloride ion is so stable that it may break away from the molecule and give $\ce{RCO+}$ and $\ce{Cl-}$ spontaneously, not to a great extent, but sufficient for this to have no limiting effect on the reaction rate.

The thing to note here is that there is significant thermodynamic drive here for the good leaving group to be substituted by a poorer one.

An important factor that makes aldehydes more reactive than ketones is that there is less bulk blocking the approach of a nucleophile. There is less steric hindrance.

We are now back to substitution reactions. But $\ce{RO-}$ or $\ce{OH-}$ are much poorer leaving groups than the $\ce{Cl-}$ or $\ce{RCOO-}$ that we saw with acid chlorides and anhydrides.

There is another factor at play here. The $\ce{C=O}$ double bond is conjugated with the $\pi$ electrons on the other oxygen, which significantly stabilises the molecule. This causes a resistance to both $\ce{S_{N}1}$ reactions (where the $\ce{RO-}$ or $\ce{ROH}$ spontaneously detaches from the molecule leaving $\ce{RCO+}$) and $\ce{S_{N}2}$ reactions (where the nucleophile attacks the molecule, giving a tetrahedral intermediate before the $\ce{ROH}$ or $\ce{H2O}$ is kicked out.) Either way that $\pi$ system has to be broken down, giving a kinetic barrier to reaction (high activation energy.)

In certain reaction mechanisms OH- may spontaneously leave a carboxylic acid. $\ce{NH2-}$ is more basic and so is very unlikely to leave of its own accord. $\ce{O^{2-}}$ is even more basic (unheard of in solution.)

If $\ce{COOH}$ is protonated, the leaving group will be $\ce{H2O}$, a neutral compound.

Generally the more acidic/less basic a group is, the more stable it will be when separated from the $\ce{RCO+}$ carbocation. Here we have a neutral molecule water (a good leaving group), a weak base ammonia (poor leaving group) and a strong base (very poor leaving group) so the reactivity order is as would be expected.

Not the answer you're looking for? Browse other questions tagged organic-chemistry carbonyl-compounds reactivity or ask your own question.