I did the numbering by taking all the functional groups in principal chain (scheme A), but my teacher did it differently and proposed the name cyclohexane‐1,3‐dicarboxylic acid (scheme B): 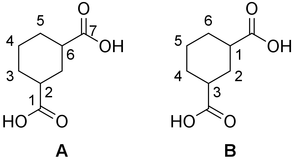 Where am I wrong?

The answer to this question is actually pretty interesting, I think. @user55119 's comment that the principal chain is the cyclohexane ring is correct -- but it seems like you understand that that's what the teacher is saying, and you're asking, "why?" The best short answer, too, is imho in your comments: @MaxW 's "naming organic compounds is just screwy" is the bottom-line answer, because there are so many crazy special cases to deal with that it sometimes seems like sorcery to come up with them. But if one is willing to dig into it a little, 99% of them do actually have consistent reasoning behind them -- even if coming up with that reasoning can feel pretty byzantine right up to the point where you get it. This can be particularly true for cyclic compounds, which can in some cases even have more than one valid IUPAC name.

In this particular case, the reason your answer is incorrect is because what you defined with your numbering isn't a chain.

Per IUPAC, a chain is a sequence of linked units that is bounded by precisely two "boundary units" -- either a branch point or an "end unit", which is itself defined by IUPAC as a unit* of the macromolecule that is bound to only one other unit.

Now, this clearly causes problems with cyclic compounds, so the IUPAC has some caveats included within the definition of a chain -- one being that a cyclic macromolecule with no end groups is also a chain. So, a chain is either linear and has two boundary groups terminating it, or it's strictly cyclical and includes no end units. That means a cycloalkane -- including the cyclohexane in your example -- is a valid chain.

"Maybe it solves the problem if I start from the unit I called #3, and leave the hanging methyl group to be the last part of the chain instead of starting from it -- so the chain would start at current #3 and end at current #1, 3-4-5-6-7-2-1." (You may want to be looking at your illustration while you read this; it'll probably make the counting I am referring to clearer than just imagining it.) No, that also doesn't work; it obviously that just puts the problem at the other end -- it still has only one boundary unit, because while the unit at the end of that new "chain" attempt, #1, is only connected to one other, the first unit in the "chain" (#3) is connected to two units, not one, so is not a boundary unit. Still stuck!

And of course, you can try counting from your #2 instead of your #1 or #3, but then you go all the way around and never have a way to include that methyl group hanging off of #2 -- you'd have to "step" onto #2 again, effectively counting it twice, to then "step" onto the tail CH. (I wish I could make a video of this "pointing" at each unit in the count; it would come out much clearer, I think!)

So in effect, really the only way you have to count the components of the macromolecule and get a coherent chain out of it is to start on #2 and end on the connection between #7 and #2 -- meaning you end up with the most practical solution being exactly the caveat that IUPAC settled on in specifying that a cyclic alkene can itself also be counted as a chain.

From there, I imagine you can figure out the rest: the cyclohexane as a valid chain is also the longest chain, you start numbering from the functional group, etc. Hope that helped explain the teacher's answer!

Edit/addendum: Some in the comment have asked for authoritative sourcing of the above. Good point, and thank you for bringing to my attention that I only stated what I used for sourcing but neither completely cited nor offered links to said sourcing. First post here in the chemistry StackExchange; please forgive my error.

IUPAC's authoritative reference work for nomenclature is their so-called Gold Book -- the Compendium of Chemical Terminology.

To address one of the comments in particular: it should be noted that nowhere in the Gold Book is there an authoritative definition of the term "ring." That would make claim that "according to IUPAC a ring cannot be a chain," already dubious based on the definition I cited above, even less likely to be the case -- they certainly aren't going to "prohibit" something they don't even define.

The complaint about the definition of "chain" referring to "polymers" as if it were a notation of exclusivity and implying that the Gold Book's definition somehow contradicts or does not apply to the Blue Book should be pretty handily refuted with a bit more reading in both the Blue and Gold books. The Blue Book states it doesn't deal with preferred naming of polymers, but does still define the systematic naming of organic structures whether polymeric or not. (Blue Book P-11, p.3) The Gold Book defines "polymer," very simply and with no caveats, as "a substance composed of macromolecules." Since "chain" and "polymer" thus both use the term "macromolecules," one would naturally be led to read that definition as well, where along with the (hopefully) uncontroversial definition of being a high-molecular mass chain of repeated low-molecular mass components, one might stumble onto Note 2:

No clearer acknowledgement of the lack of some "hard line" apparently perceived by some between polymers and "regular" organic macromolecules should be necessary.

When it comes to systematic naming, especially, polymers aren't a "special class" of substance which are somehow privy to different definitions and procedures -- indeed, the Blue Book tells us that's precisely the opposite of the case. So, for those strictly systematic purposes (which is the entire point of the question, and should be in most introductory academic settings because the point isn't to have students memorize some esoteric rules but instead to teach them something about the structure of molecules and their function within a larger compound) - the definition of "chain" given applies just fine. In fact, the definition of "polymer" is expressly defined in the Gold Book, again IUPAC's authoritative text, such that it could apply to any simple alkane with a side branch for the purposes of that text. Rather than second-guess clearly written prose, I'd rather assume the working group knew what it was doing there by leaving it vague and allowing common usage to define terms that are inherently ambiguous. (Also see: What is the difference between Alkanes and Polymers?) They seem more aware that strict legalism doesn't serve their purposes than most of the practitioners of their work do.

And for those of you who skipped this addendum entirely: good for you. As interesting as some of the contentions below are, it seems generally agreed by all that none actually change the correct answer to the original question asked anyway; whatever your take on the semantic issues around the Blue and Gold (and Purple!) books that took up half the comments, they're just that -- semantics. One can think that an answer is based on a definition that is "irrelevant" due to its source, which I find an odd and not particularly useful criticism (but hey, that's just me); but thinking then that said definition is "incorrect" is false logic. If someone who has never seen a math book in their life believes 2+2=4 because some hot dog vendor on a street corner told them so, it doesn't make 2+2 equal anything other than 4. Fortunately for them, just because their source has "no relevance" doesn't mean that they can't have a grasp of basic math.

Not the answer you're looking for? Browse other questions tagged organic-chemistry nomenclature carbonyl-compounds cyclohexane or ask your own question.

2
Nomenclature for stereoisomer example possible wrong?
3
How to name molecules with a hydroxyl group in a side chain?
5
Is there a systematic naming system to name carbonyl derivatives?
2
Numbering in IUPAC name of a trisubstituted cyclohexane
5
IUPAC Nomenclature of a dioic acid
0
IUPAC nomenclature of cycloalkadienes with substituents and alkenes on the same carbons