Is “propanol” a correct name in IUPAC nomenclature?

My teacher said that propan-1-ol can also be named propanol in the latest IUPAC recommendations. I doubt this because Wikipedia only mentions propan-1-ol as the IUPAC name (propanol being relegated to the "other names" section). 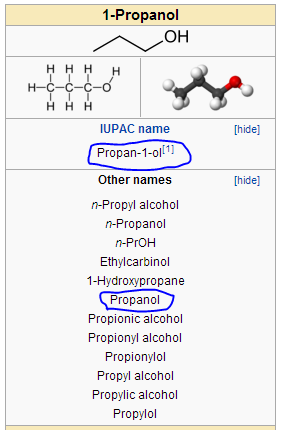 Is "propanol" an acceptable name?

The last IUPAC nomenclature recommendations were published in 1993. The current draft documents (release date uncertain) are far more lenient in their acceptance of semi-systematic naming of molecules. Please make sure you understand the differences between the Preferred IUPAC Name (PIN), the retained name, and trivial name.

Propanol is not be the preferred IUPAC name, but significantly, neither is it listed in the tables of Trivial and semisystematic names retained for naming organic compounds. It is, however, a widely accepted name for this chemical, and you are far more likely to encounter propanol in industry than propan-1-ol. Nobody uses propan-1-ol in the real world, even if it is the preferred IUPAC systematic name.

The most recent IUPAC recommendations for Nomenclature in Organic Chemistry were published in 2013 and supersede the previous 1993 recommendations, which are no longer valid.

Based on the 2013 recommendations, the molecule should be referred to as propan-1-ol as described below:

P-15.1.7.2.1: Alcohols are named by attaching the suffix ‘ol’ to the name of the parent hydride, with elision of the final letter ‘e’ in the parent hydride, if present. When alone in the structure, the characteristic group(s) must receive the lowest locant(s) possible, which is (are) cited immediately in front of the suffix

Propan-1-ol is known as the PIN (preferred IUPAC name), that is the name that you should arrive at through proper application of the recommendations.

IUPAC do allow, however, for 'retained' or 'trivial' names for compounds, so long as their use is unambiguous.

Propanol, on the other hand, is neither a PIN nor a retained name (based on the IUPAC guidelines), as it introduces ambiguity. Are you describing propan-1-ol or propan-2-ol?

0
Should I write propanol or propan-1-ol?