I am currently studying the textbook Diode Lasers and Photonic Integrated Circuits, second edition, by Coldren, Corzine, and Mashanovitch. Chapter 1.2 ENERGY LEVELS AND BANDS IN SOLIDS says the following:

In gas and solid-state lasers, the energy levels of the active atomic species are only perturbed slightly by the surrounding gas or solid host atoms, and they remain effectively as sharp as the original levels in the isolated atom. For example, lasers operating at the $1.06 \ \text{$\mu$m}$ wavelength transition in Nd-doped YAG, use the $^4\text{F}_{3/2}$ level of the Nd atom for the upper laser state #2 and the $^4\text{I}_{11/2}$ level for the lower laser state #1.

I don't understand what is meant in this part:

The answer provided by orthocresol provides a very nice explanation of term symbols, so my answer will focus on the laser specifics aspect of the question. To begin, figure 1 shows two laser rods: ruby crystal on the left and Nd-doped phosphate glass on the right. Both laser rods can be optically pumped to achieve the necessary population inversions. The neodymium lasers, i.e., Nd-doped glass or YAG (yttrium aluminum garnet) are 4 level systems, while the ruby laser is a three level system and is not discussed further. 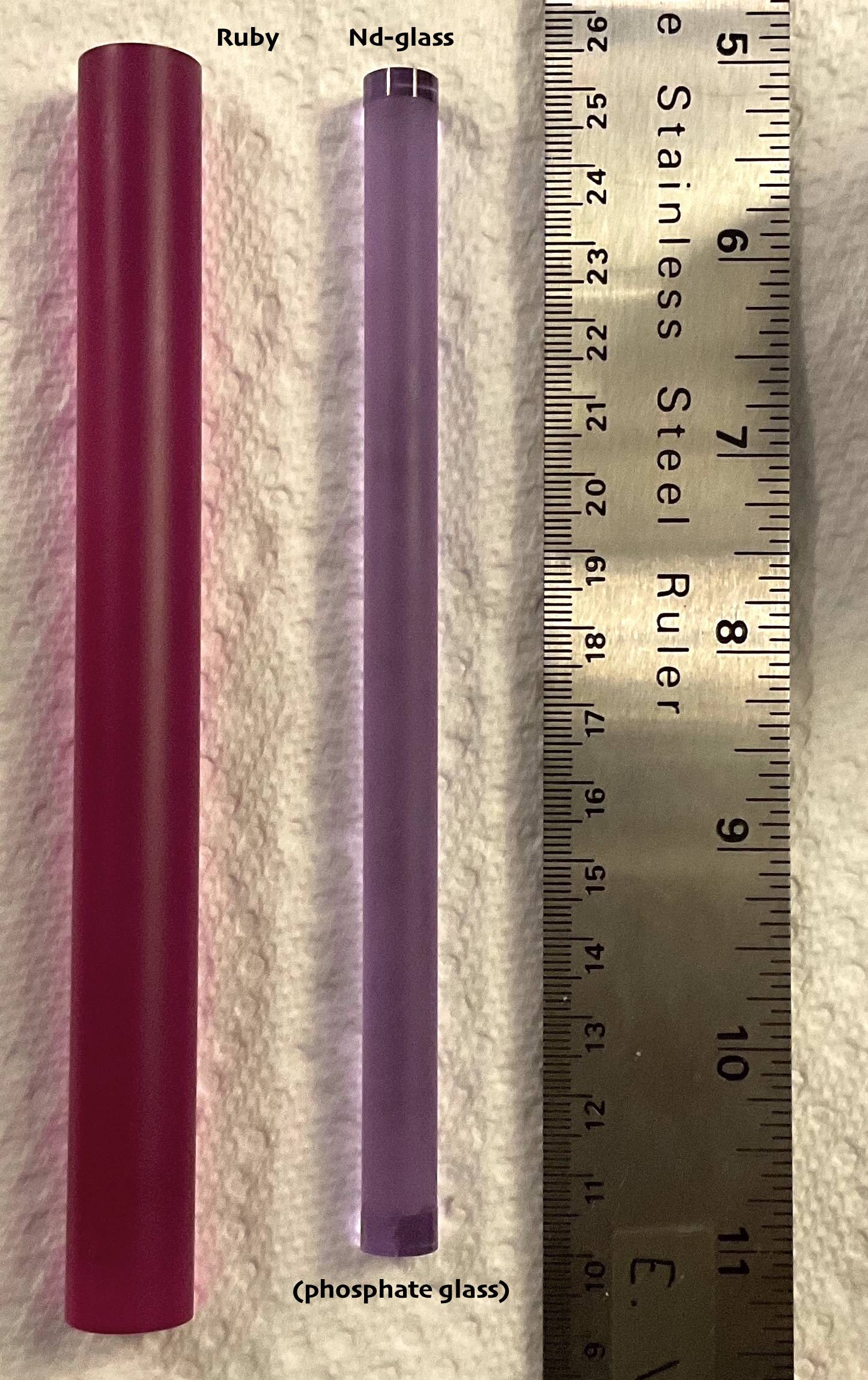 Source: my photo of two of my laser rods.

Verdeyen 1 shows the usual emission manifolds for the Nd-YAG laser and a typical glass Nd-glass laser. 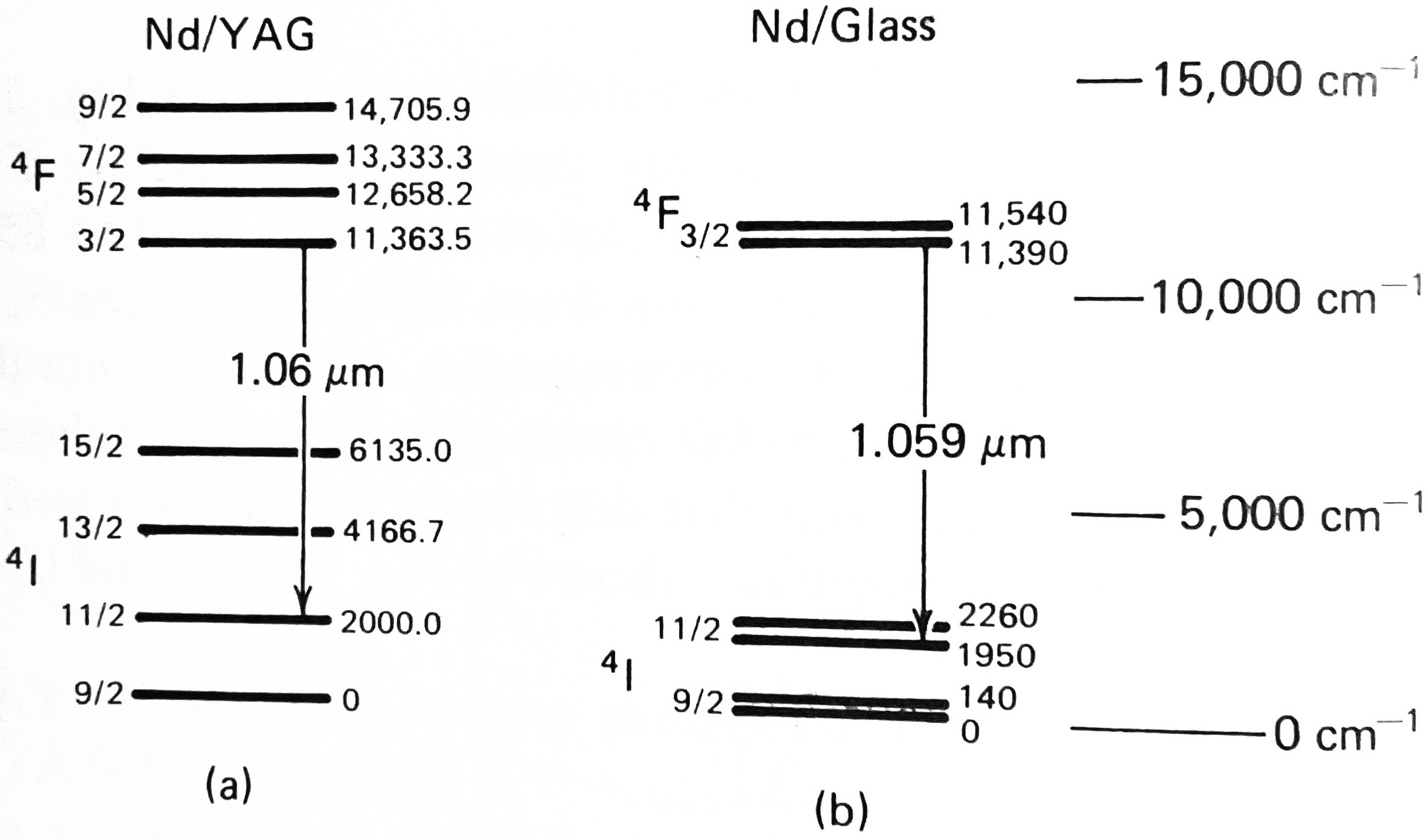 This is what Verdeyen 1 has to say about the emission manifolds: 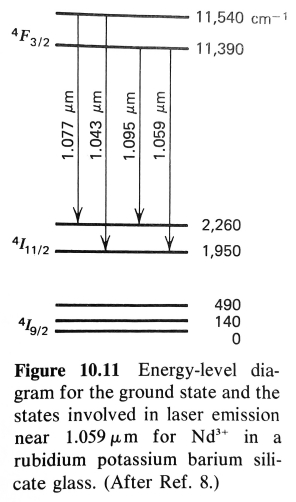 The emission profiles mentioned in the first quotation are shown below: 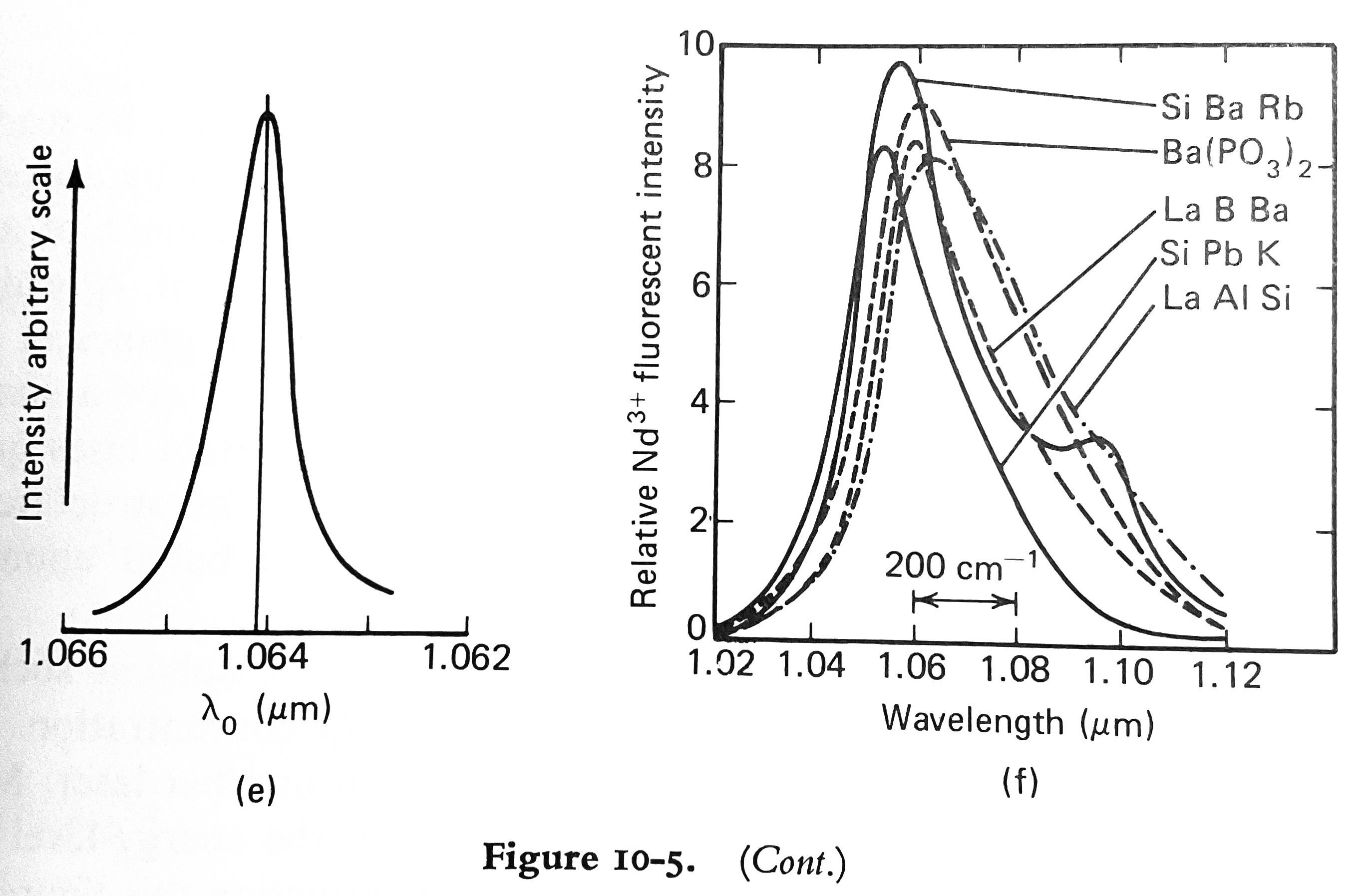 The line width of the transitions around $\pu{1.06 \mu m}$ for YAG is much smaller than that for glass $\mathrm{(\Delta \lambda_{YAG} \sim 7 \overset{\lower.5em\circ}{\mathrm{A}} \ll \Delta \lambda_{glass} \sim 300 \overset{\lower.5em\circ}{\mathrm{A}})}$ but is still asymmetric. The asymmetry is due to the fact that there are two different transitions present in the smooth curve of Fig. 10-5(e) - a strong one at $\pu{1.0641 \mu m}$ and a weaker one at $\pu{1.0645 \mu m}$ (in about a 3:1 mix). Nevertheless, the huge difference in the line shapes points out the role of the atoms’ local environment. YAG, being a crystalline substance with a well-defined structure, presents a nearly identical environment for each Nd atom and its line width is narrow. Glass, being an amorphous material, presents a different site at each location; consequently, its line shape is much broader.

The transmittance spectrum of a Nd-silicate glass is shown below:

The strong absorbance just past $\pu{800 nm}$ is especially useful for laser diode pumping at $\pu{808 nm}$. Inexpensive green laser pointers use yttrium orthovanadate crystals, similar to YAG, excited by IR laser diodes with emission wavelength near $\pu{800 nm}$. The resulting IR lasing is near $\pu{1064 nm}$, which then gets frequency-doubled to the green $\pu{532 nm}$ output. It is important to filter out residual IR, to avoid inadvertent eye damage. Not every inexpensive green laser pointer does this properly.

One more thing: the OP’s question looks reasonably easy on the surface, but it is easy to find contradictory information. For example, Lakshman and Kumar 5 provide the following branching ratios table: 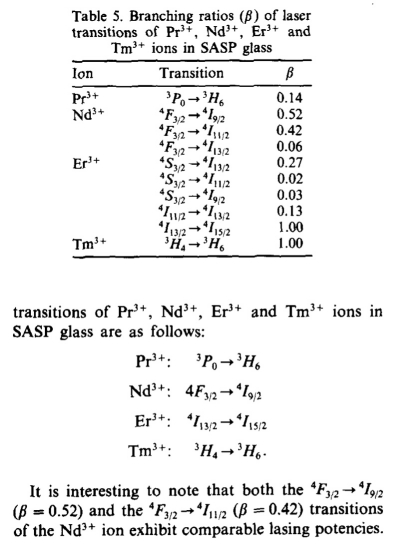 I notice that Ed V has addressed the chemistry aspects in the comments. To address the title question about the term symbols themselves: if you have a physics / quantum mechanics background, then actually term symbols are not all that complicated.

and the corresponding projection quantum number is

The term symbols are just shorthand ways of writing the coupled eigenstates $|jmj_1j_2\rangle$, where we don't care about the value of $m$ (because the $2j+1$ states of different $m$ are degenerate in the absence of a magnetic field):

In the case of atoms / molecules $j_2$ refers to the spin angular momentum and $j_1$ to the orbital angular momentum, so it's common to label them as $s$ and $l$ respectively. Also, chemists often prefer to use capital letters, because the small letters usually refer to single electrons and atoms have many electrons:

In particular, letters are used in the middle instead of numbers: $l=0$ is labelled as S, $l=1$ is P, and so on. The full sequence is SPDFGHIK....

Not the answer you're looking for? Browse other questions tagged physical-chemistry solid-state-chemistry or ask your own question.

34
Why is the letter J omitted in the spdf... sequence?
3
How to Combine an Emission spectrum into a colour?

10
Terminology of atomic spectroscopy: Difference Among Term, States and Level
2
Why Frenkel defect does not impact the density of the solid?
3
Electron Ionization and the Franck-Condon Diagram: vibrationally excited and vibrationally ground states
8
Ground state term symbol for Cerium (Ce)
1
How does work from other sources affect Gibbs free energy of the system?
3
Do the αβ and βα states of homonuclear AX system have same energy?
2
Total orbital angular momentum in a filled p subshell