Why are s orbitals more “penetrating” than p orbitals?

In polyelectronic atoms, the reduction in the net central force due to electron-electron repulsion is accounted for through an effective nuclear charge that depends on a “shielding effect” of inner electrons.

The reason for the splitting of energies of orbitals in the same quantum shell (s<p<d<f) is usually given that s orbitals are more "penetrating" i.e have a greater probability density near the nucleus, so experience less shielding and thus a greater effective nuclear charge.

However, I can't understand why a comparatively larger p. density is used to measure the penetrating power. the mean orbital radius actually decreases from s to f orbitals. Sure, s orbitals have a relatively higher p.d near the nucleus but the rest of the p.density is also relatively more further away than that in p,d or f orbitals. Using the mean distance as the appropriate measure, shouldn't the energy be in the order f<d<p<s?

I found an old slide from when I was teaching.

These are plots of the 2s and 2p orbitals for hydrogen (assuming 1 electron). The radial wave function is on the left and the probability density as a function of distance from the nucleus is on the right ($4\pi r^{2}R(r)dr$ if you understand the calculus).

You can see that there's a blob of density that comes closer to the nucleus for the s orbital. There's your penetration. 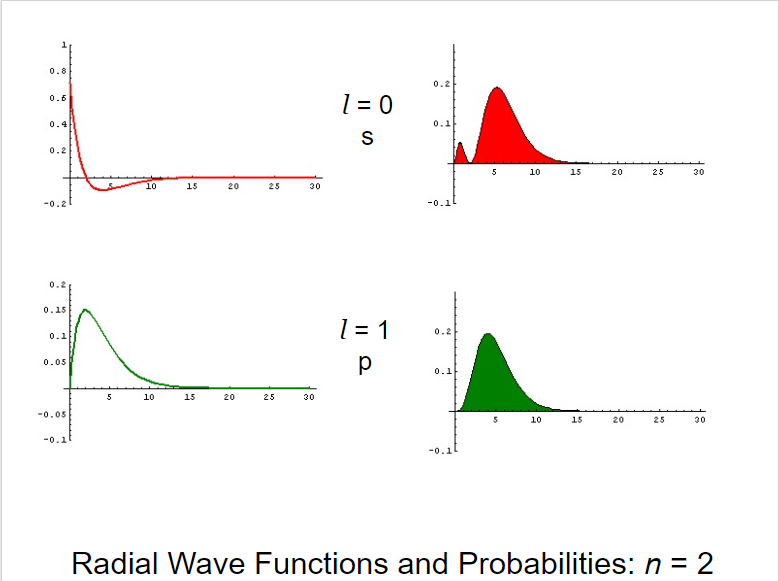 93
Why is the 2s orbital lower in energy than the 2p orbital when the electrons in 2s are usually farther from the nucleus?