Is aspirin generally more stable at lower $\mathrm{pH}$s then?

UPDATE 2: No answer has been found — a reword to this question can perhaps be “Why is aspirin less susceptible to hydrolysis at $\mathrm{pH \ 2}$ when theoretically, lower $\mathrm{pH}$s are advantageous for ester hydrolysis?” 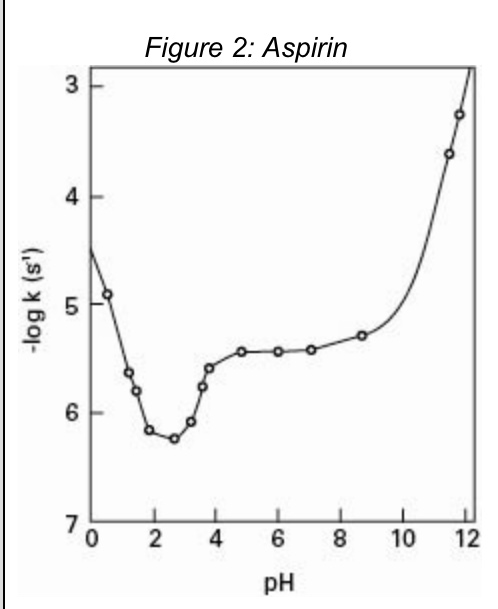 What seems to be the explanation to this?

To understand the pH rate profile of the Aspirin hydrolysis, we have to look at all the possible mechanisms through which the hydrolysis may take place.

A good rule of thumb for interpreting a pH rate profile is: going from left to right, when the line curves upward (i.e. the rate increases suddenly), a new mechanism is dominating the reaction. When the line curves downward (i.e. the rate drops suddenly), that generally indicates that there is a change in ionisation/dissociation or that the rate-limiting step has changed for the same mechanism.

If you look at the graph for Aspirin, you will see that the graph bends up two times, around pH 2.5 and pH 8.5. So, there must be 3 different mechanisms throughout the whole pH range. (There is also a downward bend at pH ~5, that's not important at the moment).

So you can divide the graph into 3 segments (separated by blue line): 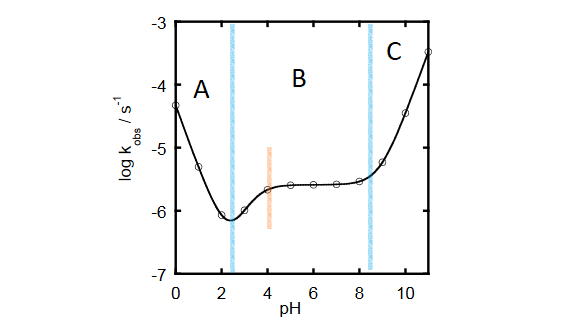 At pH < ~2.5 i.e. strongly acidic enviornment, the main components in the solution are the protonated form of aspirin (pKa of aspirin ~ 3.5), and $\ce{H3O+}$. A mechanism can be drawn:

This is the usual acidic ester hydrolysis mechanism. I haven't drawn the last few steps for brevity.

When pH > ~2.5, the solution contains both the protonated and the deprotonated form of aspirin, along with a lower concentration of $\ce{H3O+}$ as the solution is not strongly acidic anymore. As the rate of the reaction has increases suddenly, that must mean there is another mechanism in effect now, which overshadows the previous acid catalysed mechanism.

This part is difficult, because multiple mechanisms can be drawn, and it is difficult to distinguish which one is actually happening. Here the graph bends down once, and that happens around pH 4, close to the pKa of aspirin(3.5) which should clue you in to the fact that the mechanism here is somehow affected by the deprotonation of aspirin.

Note that we can't draw a mechanism where water attacks the ester directly, because water is not a good enough nucleophile, and also because the anion has to participate in the reaction somehow, as I said earlier.

Another possible(*) mechanism would be direct attack of the carboxyl anion on the ester:

Here an anhydride intermediate is formed, which is then hydrolysed as usual, and I have not drawn that part of the mechanism.

(*) I remember hearing in a lecture, that this mechanism via anhydride has been proven to be wrong, based on isotope substitution studies. I can't find a reference right now, so I will leave the mechanism in the answer, but I am pretty sure the first mechanism is the correct one.

Here, $\ce{[aspirin-]}$ and $\ce{[aspirin-H]}$ represents the deprotonated and protonated form of aspirin, respectively. The rate of the reaction is: $$\ce{r=k2[aspirin-]}$$ But the way the experimental measurements are taken means that the rate is expressed in terms of the total aspirin concentration: $$\ce{r=k_{obs}[aspirin]}$$

After pH 8.5, the main components of the solution are the deprotonated form of aspirin and $\ce{OH-}$. So, the base-catalysed mechanism becomes dominant.

So the graph rises linearly with increasing pH.

[P.S. The solvent does not appear in the rate equations.]

Not the answer you're looking for? Browse other questions tagged acid-base reaction-mechanism aqueous-solution hydrolysis physical-organic-chemistry or ask your own question.