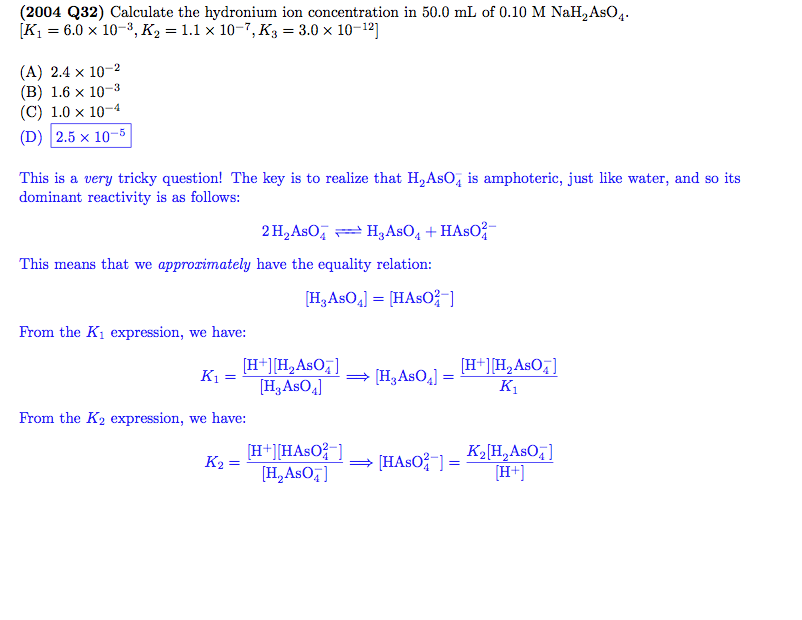 However, if this is an amphoteric substance as the solution claims, shouldn't both $K_a$ values be comparable? It seems logical that if it is able to act as both an acid and a base, the equilibrium constants should at least be similar to each other. Instead, one is several order of magnitudes larger than the other? Why can this be true and $\ce{H2ASO4-}$ still be an amphoteric substance?

Next, how did they arrive at the statement

What is the evidence that shows this to be true? Isn't the $K_a$ value of the basic reaction ($1.6 \times 10^2$) much larger than that of the acidic reaction? Why should the concentrations be equal?

Finally, let's say you are calculating the pH for the diprotic substance $\ce{H2S}$, which undergoes the following diassociations:

To find the pH you would assume that the first reaction is dominant, and that the effects of the second reaction consuming $\ce{HS-}$ are minimal, and then calculate the pH from there — right?

I'll address your questions in 3 parts:

(B) How to solve the problem without making unexplained assumptions

Translated into equilibrium constants, if your species has a pKa between 0 and 14, and its conjugate acid (what you get when you protonate it) also has a (necessarily lower) $pK_a$ between 0 and 14, your species will act in aqueous solution as either as an acid (losing a proton in the presence of strong base) or as a base (gaining a proton in the presence of strong acid).

In a monoprotic acid like HF, all the F appears either as F$^-$ or as HF (two species). You can write down 1 equilibrium equation, a mass balance for F and a charge balance, and solve all three equations simultaneously; when you combine the three you get a quadratic equation that can be solved exactly.

But with a multiprotic acid, things get complicated fast. In this problem you have three equilibrium equations, plus the mass-balance and charge-balance equations. That's 5 equations in 5 variables.

Fortunately it's possible to combine 4 of them easily, using only high-school algebra. They are the 3 equilibrium equations and the charge balance. This reduces the problem to two variables (the pH and the concentration of one of the arsenic ions) in two equations.

The important thing is that all these four concentrations are proportional and given one you can find all others if you know the pH. (We don't know the pH, but I'll address that in a moment.)

What if you didn't have multiple choice? Then you'd want to draw a graph or a table, taking (say) every integer value of pH and connecting them. Here is such a graph: 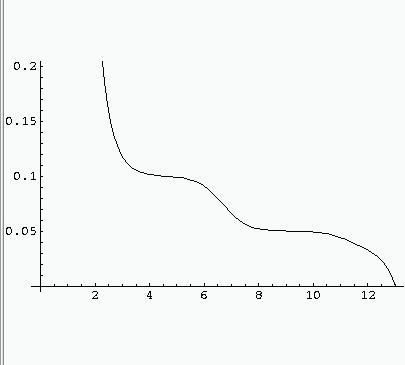 The horizontal axis is pH and the vertical one is total arsenic concentration. The correct pH is where the vertical coordinate is exactly 0.1, and you can get a good idea of its value by eyeballing, or solve by successive approximations.

So given the claim about "dominant reactivity", the equality is true, and by the way, the equality implies that the pH is the average of $pK_1$ and $pK_2$. (This follows, by taking logs, from the analysis that I'm guessing your book gives right after the part of the solution you quoted.)

The problem with the claim is that it does not follow from the amphoteric nature of $\ce{H2AsO4^-}$ alone. It requires two additional conditions: You're starting from only $\ce{H2AsO4-}$, and in relatively high concentrations. I'll illustrate why these conditions are necessary:

(1) You have to start with only $\ce{H2AsO4-}$ (plus a counterion that doesn't participate further, like Na$^+$). If you started with some $\ce{H3AsO4}$ in addition, you wouldn't have the equality $\ce{[H3AsO4]=[HAsO4^{2-}]}$, even approximately. Or, to use the example you gave, if you start with H$_2$S the amphoteric character of HS$^-$ wont help you calculate the pH of the resulting mix. On the other hand if you started by dissolving NaHS alone, it would.

I hope this helps answer your very interesting and perceptive questions. Don't hesitate to ask for further clarification if necessary!

However, this also seems to be a polyprotic substance.

The two terms - amphiprotic and polyprotic - aren't mutually exclusive. Amphiprotic substances can simply behave as both Bronsted-Lowry acids and bases in that they can both give up and release hydrogen protons.

Polyprotic acids have multiple protons to donate. For example, phosphoric acid is triprotic.

Why is one $K_a$ value so much larger than the other? If this were a amphoteric substance shouldn't the $K_a$ values for both be comparable?

Good observation. This lies with Coulomb's law. Think about it. A neutral molecule kicks off a hydrogen proton. Now you have the first conjugate base. The first conjugate base is negatively charged. It also attempts to kick off a proton. Which do you think is easier? Clearly the first process is. Remember that oppositely charged particles attract. This explains why $K_{a1}$ values for polyprotic molecular acids are generally significantly larger than corresponding $K_{a2}$ values.

Just because the $K_a$ values differ by several orders of magnitude doesn't mean the ion/molecule can't be amphiprotic.

First, amphiprotic substances don't have $\mathrm{pH}$ values by themselves. In solution, then yes.

Further, I also found another page that gets to the same result in a different manner. They start by saying:

Next, why can't this method of calculating pH in amphoteric acids be used for diprotic acids? I found another page that details how to do so but even though the reactions are essentially similar to those for amphiprotic acids, the end result is different. Why does the same line of reasoning as used for deriving the formula for amphoteric substances fail for diprotic/polyprotic acids?

1
How does the pH of solutions of salts in which the cation is acidic and anion basic, depend only on the relation of their constants?

21
Does the number of H+ ions in solution go up on dilution of a weak acid?
5
How to calculate the pH of a buffered solution with Henderson Hasselbalch?
4
How to calculate pH of a solution with two dominant equilibria?
5
On the activity of liquids and solvents in equilibium constants
1
What are the enthalpy and entropy contributions to carboxylic acids dissociating in water?
0
Can ICE tables give two solutions? What does this mean physically?
5
In acid/base chemistry, are there amphoteric substances that undergo something that resembles disproportionation in redox chemistry