How can a bridging hydride be considered a 3 electron donor in the covalent model for electron counting?

On page 3 of John Hartwig's "Organotransition metal chemistry" textbook [1], he lists the number of donated electrons for common ligands according to the two standard models of electron counting in organometallic chemistry:

The ionic model: ligands are characterized according to their formal charges after cleaving the M-L bond under the assumption that both electrons reside on the ligand.

The covalent model: all ligands are treated as neutral, and the number of electrons they donate (1 $\ce{e^-}$ "X-ligands", 2 $\ce{e^-}$ "L-ligands", 3 $\ce{e^-}$ "LX-ligands" and so on) are determined by distributing the electrons from the M-L bond such that you generate a neutral ligand (he phrases this as a neutral organic group). 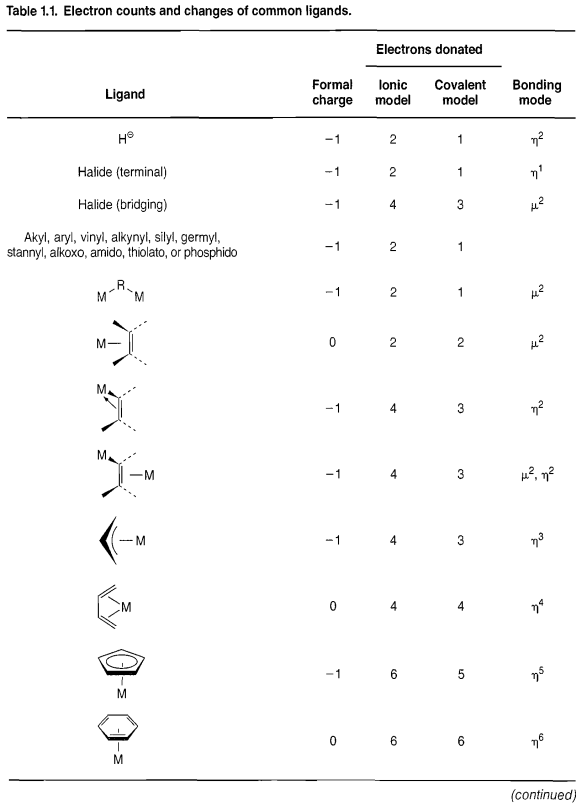 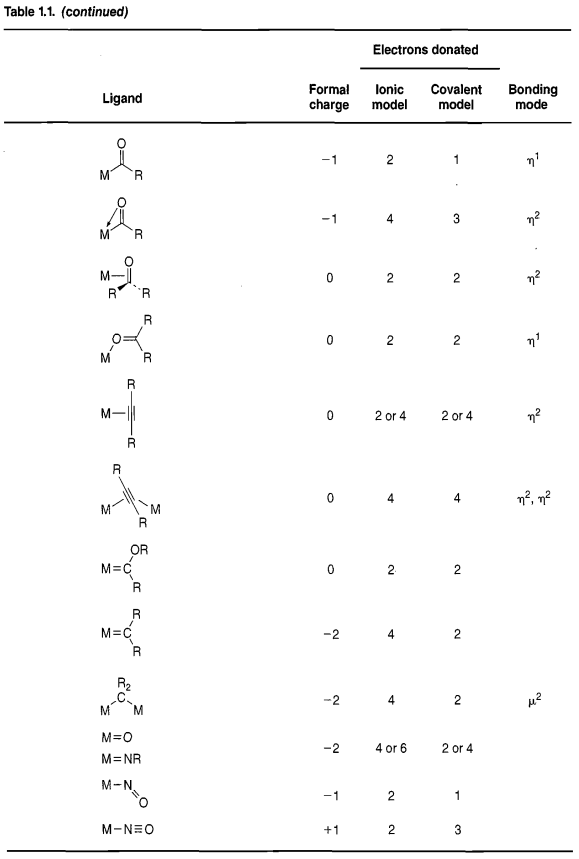 The latter makes no sense to me. When the bonds connecting the bridging hydride are severed, the only way to produce a neutral ligand would be to generate atomic hydrogen, meaning 3 electrons from the M-H-M system would remain with the metals. How then, do we arrive at the hydride donating 3 electrons in this scheme? Is this a typo? Or is it written to somehow indicate that the 3 "donated" electrons are actually from the metals? Or the H-M composite ligand which we can view as then binding to the third metal?

EDIT: It was noticed that in the table you provided, the example is actually for a bridging halide, not a hydride. This case is similar, but not exactly like the case of hydride. The main difference is that the halide has lone pairs, so those act as the L-type ligand for the second metal center instead of the M-X σ bond.

Not the answer you're looking for? Browse other questions tagged coordination-compounds organometallic-compounds or ask your own question.

11
Proper common notation for a ligand

15
The bond in coordination complexes
2
NO linear vs bent - valence electron
12
Noyori hydrogenation and the Curtin–Hammett principle
2
Why are electrons added in the ionic counting method?
4
How to electron count bridging ligands?
4
Determining the oxidation state of a bridging platinum complex
5
What is the electron count in this nickel complex?
3
In metal complex electron counting, is the neutral or ionic formalism more correct?