What is the 3D shape of an ethane molecule?

I am currently teaching a course on groups, and want to give my students "real life" examples of symmetry groups to think about. The ethane molecule would be one such. But, the on-line sources don't all agree on the exact shape. I'm fairly sure ethane looks like either this 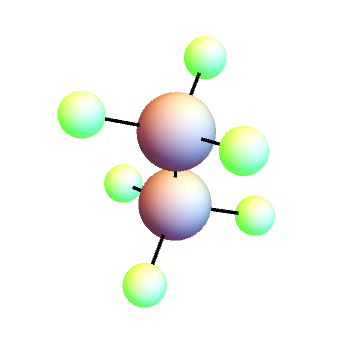 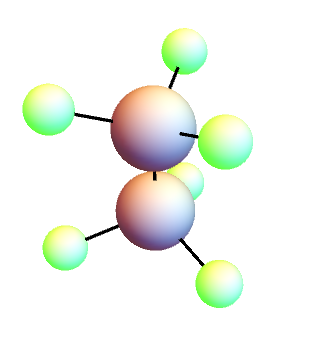 To turn this into a homework problem I would like to know which is correct?

Wikipedia suggests that the one on the top is correct. However, the picture below also appears in some places. Like here.

My theory: Whatever little I know about physics/chemistry suggests to me that the top one is more likely. The reason being that the similarly charged hydrogen atoms repel each other (possibly this is only a dipole or a higher order effect?). Therefore it stands to reason that one triple of hydrogen atoms is aligned in a way that they use the "in-between" angles.

Nitpick: The "correct" answer probably is that neither of these two images is quite right. You see, I generated them using the tetrahedron (=methane) angle of 109.5 degrees everywhere (simpler for me to do it that way). But Wikipedia says that the angle between the carbon-carbon bond and a carbon-hydrogen bond is slightly larger, 111.17 degrees. So the hydrogen atoms at the top should be pushed a teensy bit further up and similarly the ones at the bottom a little further down. A bigger similar effect is that in the actual molecule the distance between the carbon atoms is larger than the carbon-hydrogen distance. Neither of these has an effect on the collection of symmetries the molecule has, but the answer to my main question does have an impact. That's why I am asking.

If somebody is inclined to elaborate on the reason(s) why we don't have that methane angle everywhere, I will be educated further :-)

You need to know the terms "staggered" and "eclipsed", because that's what we call these two conformations. Now to the point: the real ethane molecule rotates and changes shape all the time, so both geometries are possible, albeit the top one is more likely, because it is the energy minimum. To make the molecule stop in the staggered conformation, you have to freeze it to nearly absolute zero, or maybe put some bulky groups in place of hydrogens.

This, BTW, is the reason why I dislike to use ethane molecule as an example when I teach space groups to kids. Better use something rigid.

Not the answer you're looking for? Browse other questions tagged molecular-structure hydrocarbons or ask your own question.

7
Creating ethane through electrolysis of vinegar
2
How to determine what organic molecule has the highest boiling point?
12
Why are the two CH2 groups in allene perpendicular to each other?
4
Can a saturated hydrocarbon have side chains?
4
Shape of urea molecule around N atom
1
Is PCl5 really trigonal bipyramidal in shape?
4
What is the origin of rotational energy barrier in ethane?