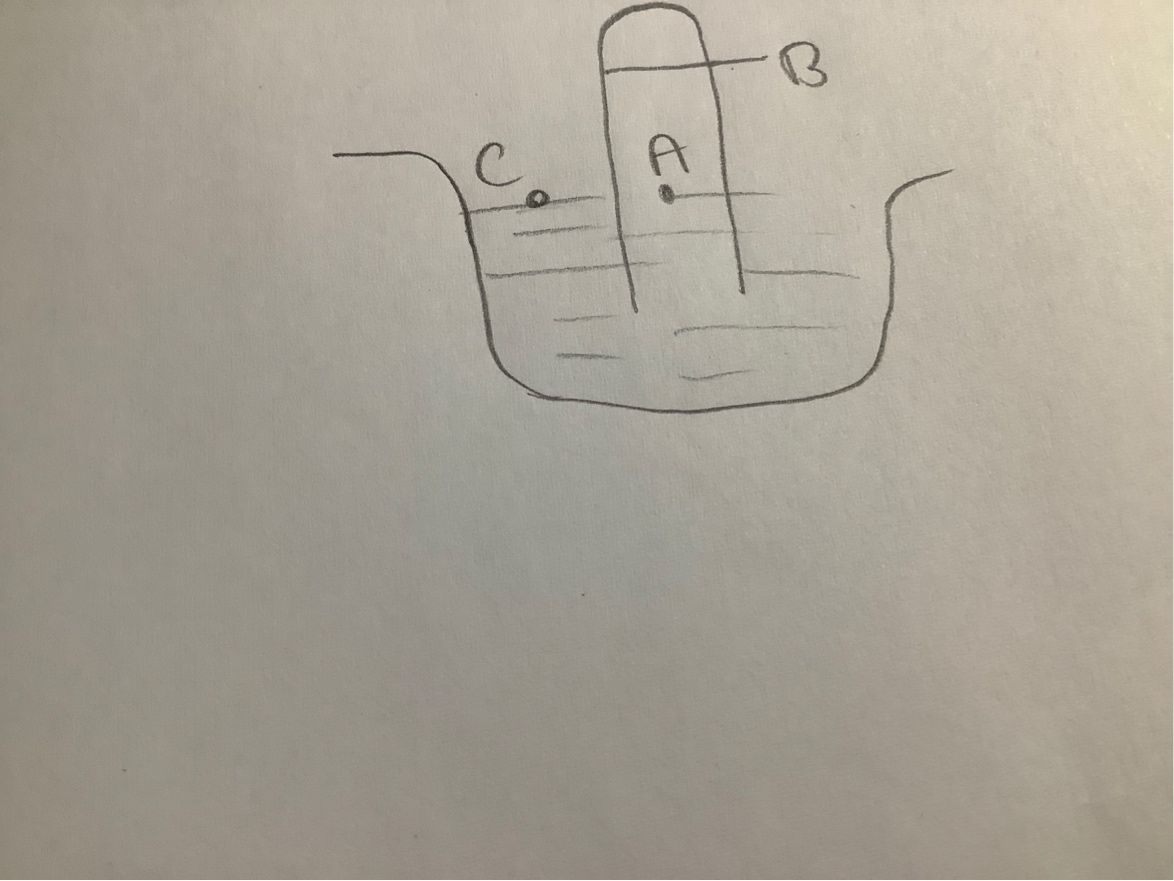 Now at A, there is pressure by mercury column which is nothing but it's weight. Then, at C there is pressure which is atmospheric pressure. Also, the density at A is more than at C. What they say according to the law is that the pressure at C and A are same. I am not able to understand why the pressures are same actually because of the difference I listed in my text. Also, the pressure at C is inside the barometer and at A is outside. So, how can they ever be same and if they are, what is the condition for it.

Then, they also say that pgh is atmospheric pressure. Where they used denstiy of mercury. Now, This should be mercury pressure and not atmospheric right. Density for atmosphere is very low right

The vertical gradient of the hydrostatic pressure in liquid of the density $\rho$ at gravitational accelerationg $g$ is:

As we can consider $\rho$ and $g$ as constants, the difference of the pressures is then :

If pressure at the same altitude within the connected liquid of constant density was different, there would be the liquid flow until it is equal.

The pressures at the same altitude would be slightly different, if e.g. mercury at both columns had different temperature and density.

In fact, it does not matter if it is mercury or water, the important thing is the density is constant across the liquid. What other than atmospheric pressure would you expect at C ( regardless of the liquid below ) ? Your scenario description is not exactly clear. Now at A, there is pressure by mercury column which is nothing but it's weight.

If the density along the thought path from A down and then up to C is constant, then pressure at A and C are the same, if the liquid is in the rest. Any pressure difference would cause motion of the liquid.

Then pressure anywhere below C ( with negative $h$ ) is

Between A and B, at height $h$, is the pressure:

but this time $h$ is positive.

B is then at the height

( if we neglect very low vapour pressure of mercury.)

The mercury in the tube will fill up to the point where the total weight of mercury produces just enough pressure at the bottom of the tube to balance the external atmospheric pressure. The density is irrelevant as liquids are essentially incompressible.

The point is that the pressures are equal and the densities are irrelevant. If you used a liquid other than mercury the same effect would be seen but the height of column would be different (water is about 14 time less dense than mercury so the total column would be ~14 times higher for the weight of water to balance the pressure of the atmosphere). This is the only point where density matters: it doesn't vary in the liquid column.

Not the answer you're looking for? Browse other questions tagged physical-chemistry pressure atmospheric-chemistry liquids mercury or ask your own question.

3
Why does the cathode ray tube only start glowing at low pressures?
15
PV=nRT approximation on other planets?
13
Curious about the chemistry of Carbon-14 after it's produced in the atmosphere
14
Aurora borealis - less favored energy transitions higher in atmosphere?
3
Why is atmospheric composition compared by volume?
3
Properties of azeotropes
2
Confusion regarding $\delta$ charge compared with electronegativity