Why is boiling point of Ammonia greater than Arsine?

I have previously read that the boiling point of Stibane(SbH3) is greater than Ammonia(NH3) as ammonia is gas at room temperature and no hydrogen bonding exists in the gaseous form of NH3. Hence, as SbH3 is greater in size, has greater molecular weight; its boiling pint is higher than NH3.
why does Stibane have a higher boiling point than Ammonia

In the case, of AsH3, even this molecule is gas at room temperature and its boiling point should be greater than NH3, but this is not the case and NH3 has a higher boiling point than AsH3.

I want to know what is the reason behind this trend. (NH3 having a higher boiling point than AsH3)

There is the general trend in the groups 15, 16, 17 of raising of boiling points for the binary compounds with hydrogen, going down the groups.

But the first members of each group - $\ce{NH3, H2O, HF}$ - have anomally with their boiling points being exceptionally high, due hydrogen bonds. The strength of these bonds and the boiling point decreases in the order $\ce{H2O > HF > NH3}$.

See the figure 2 on wordpress page for an illustrative picture: 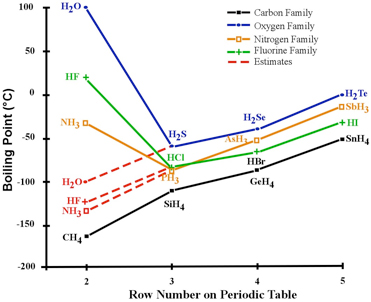 Hydrogen bonds play role in (not limited to):

Note that the fact that both NH3 and AsH3 are gases at room temperature is irrelevant for the above.

Not the answer you're looking for? Browse other questions tagged organic-chemistry periodic-trends boiling-point hydrogen-bond or ask your own question.

21
Why is the boiling point of stibane higher than that of ammonia?