I've come across an interesting protocol for photochemical reduction of benzophenone to benzhydrol (diphenyl methanol) with sodium alcoholate in alcohol, the 2nd protocol in https://prepchem.com/synthesis-of-diphenylmethanol/. The reaction proceeds via ketyl radical initially to benzopinacol, which is immediately cleaved by a catalytic amount of sodium alcoholate to the benzhydrol and benzophenone. The latter repeats the reaction until it's used up. The alcohol acts as a reducing agent and solvent.

the flask is filled to the neck with more of isopropyl alcohol ... The flask is tightly stoppered and inverted upside down in a beaker.

I want to know why is the flask inverted?
My best guess is to avoid exposure to air, since that would interfere with the reduction. But then why isn't it enough to just stopper the full flask?
Might this have more to do with the quality of exposure to the light source (neck and stopper producing a shadow in the upright position)?

Also, is there some official term for this inverted flask technique?

I think the reason for inverting the the round flask is to capture sunlight very efficiently. A round bottomed flask filled with a fluid is like a ball lens. Sun rays can be considered parallel and see how they focus. If light is coming from all directions, every part will be illuminated well as the Sun moves. See ball lenses here ball lenses 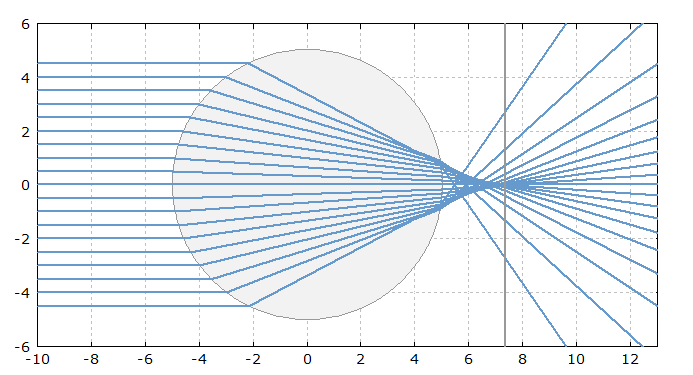 The clue comes from the instruction in the procedure given in your link "Then the flask is exposed to the best available sunlight. "

Not the answer you're looking for? Browse other questions tagged organic-chemistry experimental-chemistry photochemistry organic-reduction or ask your own question.