Does an electron's spin change when being excited?

My preconception is that when you fill an empty orbital by exciting an electron (with a photon), the empty orbital should be filled by an electron with the same spin. However, I've seen examples of that happening and not happening. For example, on this University of Calgary web page there is an image of the electron spin being flipped:

The lowest energy transition is that between the highest occupied molecular orbital (HOMO) and the lowest unoccupied molecular orbital (LUMO) in the ground state. The absorption of the EM radiation excites an electron to the LUMO and creates an excited state. The more highly conjugated the system, the smaller the HOMO-LUMO gap, DE, and therefore the lower the frequency and longer the wavelength. 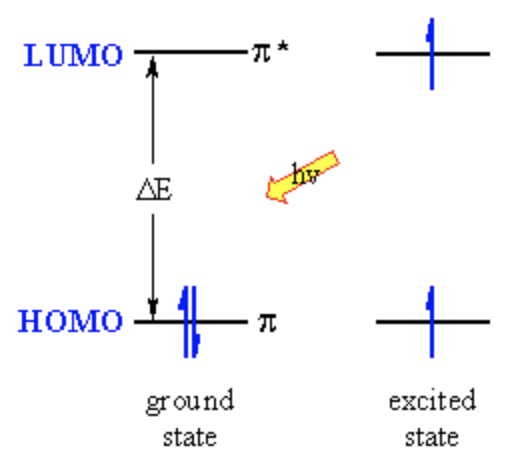 Does it just not matter that much energetically?

Note that this doesn't prescribe which electron gets excited (spin-up or spin-down); in general we can't say anything about that.

The reason is to do with Fermi's golden rule. The transition probability is governed by a quantum mechanical integral (the "transition dipole moment") which looks like

Here, $\psi_\text{initial}$ and $\psi_\text{final}$ are the initial and final states respectively, and $\hat{H}$ is the perturbation Hamiltonian. For an electromagnetic wave process this is the dipole moment operator $\hat{\mu}$, which can be expressed in terms of the position operators:

The key things to note are that:

Therefore, the transition dipole moment can be factorised into a spatial part and a spin part:

In particular, the spin part $\langle \chi_\text{final} | \chi_\text{initial} \rangle$ is zero, and hence the transition probability is zero, unless the initial and final states have the same spin. Processes which involve spin flips are often called "spin-forbidden".

Under certain conditions, the assumption (1) breaks down: that is to say, the wavefunction $\psi$ cannot be cleanly factorised into spatial and spin parts $(\phi, \chi)$. This happens particularly when spin–orbit coupling is present: heavier elements (i.e. elements with larger atomic number) typically exhibit greater spin–orbit coupling.

Thus, for light atoms like hydrogen, spin-forbidden processes are genuinely "forbidden", and therefore almost never happen. However, so-called "spin-forbidden" processes can actually happen for heavier atoms. Some examples include:

The picture shows a triplet excited state returning to the ground state by emitting a photon, i.e. phosphorescence. This can only happen if there is also an interaction that couples angular momentum change with the transition, such as spin orbit coupling.

Not the answer you're looking for? Browse other questions tagged orbitals photochemistry spin or ask your own question.

21
Why is manganese(II) coloured although the transition should be spin-forbidden?

0
How does photosynthesis work?
2
Change in spin angular momentum during transition in one-electron atoms
1
Highly conjugated compounds and the effects of substiuents
2
What does "spin degeneracy" mean in this context?
5
Photochemical cycloaddition of ethene