What happens when we heat an atom?

Question is simple.. If we take an atom of any element and then supply heat energy to it then what will happen?

What I thought is that in the beginning, energy (quanta; due to excitement of electron and then moving back to ground state) should be evolved and then electron should be emitted... Am I right?

If we take an atom of any element and then supply heat energy to it then what will happen?

A single atom can move in three dimensions (x, y, z) through space, it cannot rotate about an external axis like a diatomic molecule can, nor can it vibrate. As you supply heat (or any form of energy) to the system containing the atom, it's kinetic energy will increase and it will move faster through space. If you supply enough energy, then the electrons surrounding the atom will absorb that energy and undergo electronic transitions from the ground state to various excited states. This process can be diagrammed using a Morse potential diagram , I've drawn a simple one below. The diagram is meant to show promotion of an electron from the ground electronic state to higher and higher electronic levels as more energy is applied to the system. Note that as the electron is promoted to higher energy levels, the average separation distance between it and the nucleus increases. If enough energy is supplied, an electron will dissociate from the atom and we will be left with an ion. Continue to supply even more energy and more electrons will be removed from the atom. Pumping even more energy into the system will ultimately lead to transformations in the nucleus of the atom. 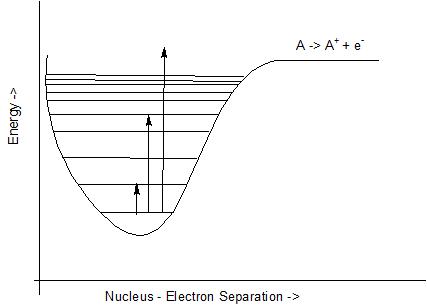 Well, strictly speaking, you can not heat an individual atom, because heat is a macroscopic phenomenon: it is a mechanism of energy transfer from one macroscopic body to another one. And the same is true for the related notion of temperature. But, both temperature and heat can be explained at microscopic level as follows.

Thus, you can heat a body (not an individual atom), i.e. you can transfer energy to it by means of heat, and while the body is heated, the mean kinetic energy of all particles (atoms, nuclei, electrons) will rise, i.e. it temperature will rise. The kinetic energy of an electron acquired then can be partly redistributed with its potential energy when electron ``jumps'' into higher orbital. After excitation the atom may return to the ground state or a lower excited state, by emitting a photon with a characteristic energy.

And, of course, in principle, we could add so much energy to a body be heating, that electrons will indeed leave atoms.

Not the answer you're looking for? Browse other questions tagged atoms quantum-chemistry heat or ask your own question.

1
Why does electrode potential depend upon enthalpy of hydration and sublimation?

7
Do I understand why heat capacity is called 'heat *capacity*'?
6
How does molecular collision excites the electron?
7
Atomic emission spectra: classical vs. quantum mechanics
2
Is nucleus at the centre of the atom? If so why?
35
Can hot food ever emit x-rays or gamma rays?
2
Providing more than required amount of energy to an electron in an energy level
4
Is there a finite number to the possible state of electron in an atom?
5
Why does calcium emit circularly polarized light?