In most aromatic compounds (e.g. benzene), their $\pi$-bonding molecular orbitals are completely occupied and their antibonding molecular orbitals are unoccupied. I'm wondering if there are any compounds where this is the case, but where the highest energy bonding MOs are only half-filled, so they contain unpaired electrons. My best guess at a molecule with that property is 1,4-dihydro-1,4-diborinine, as it has the same geometry as benzene (I think), including the adjacent p-orbitals, but it has two fewer electrons. Does this molecule still exhibit ring currents like benzene? Does it show the same type of delocalization?

The given dihydroborinine is indeed anti-aromatic if is it fully conjugated and planar, but counting pi electrons in a conjugated ring is not as simple as it seems when you have boron in the ring. If the boron is not joined to a ligand, as in (mono)boronine or unhydrogenated diborinine, it could pass its electron deficiency into the sigma bonding framework to preserve pi electron aromaticity.

The basic (or Lewis acidic) case of borinine

Borinine or borabenzene, $\ce{C5H5B}$, is two electrons short of a well-known isostructural aromatic compound, pyridine. We might suppose that as in pyridine, the sigma bonding and non-bonding orbitals including the outward-directed orbital from the boron must be filled before pi electrons can be introduced, which would leave borinine with only four pi electrons. And we might be wrong.

Raabe et al. [1] perform an extensive quantum mechanical study of borinine molecules. They find that in fact there are six pi electrons, the ring is aromatic, and it is the sigma electron framework that is electron-deficient because the outward-pointing boron-based orbital is empty.

To understand this, we look at the structure of borinine given in the above reference, from which the figure below is taken: 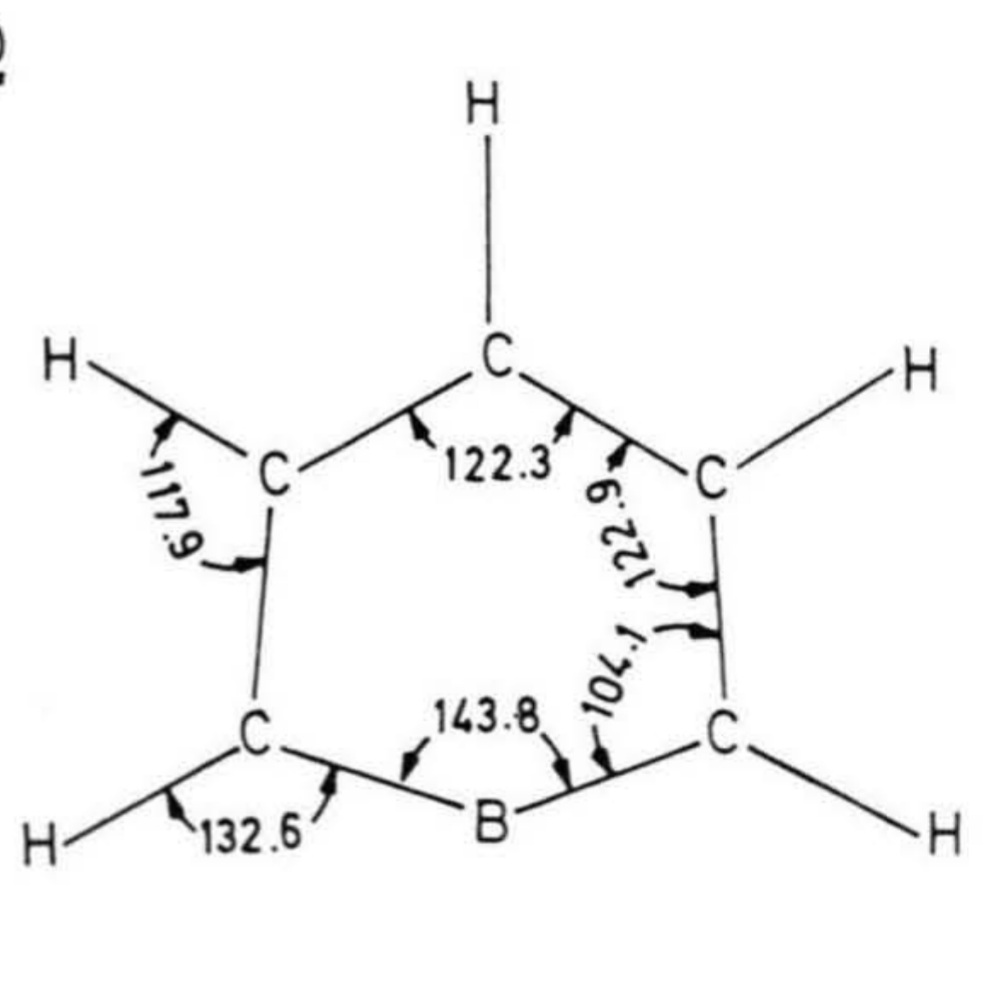 The above figure is one of several calculation results, but the all show similar results. Not only is the ring highly distorted, it is distorted oppositely from what one might expect from the boron atom being inherently larger than the carbon atoms. The boron is displaced inwards from where it "should be".

This inward displacement means the lobes from the adjacent carbon atoms are overlapping the "empty" outward boron-based orbital. This overlap creates delocalized bonding around the boron and makes the empty orbital sigma antibonding, whereupon it becomes the LUMO. The low-energy sigma orbitals are filled after all, but they do not include that outward-pointing boron orbital. Thus borinine retains six pi electrons.

We should not conclude that borinine is therefore stable. The pi electron component is stabilized by aromaticity, but with the overall electron deficiency in borinine this comes with an electron-deficient and highly distorted sigma-electron framework. The antibonding orbital referenced above is too high in energy to be occupied in borinine as such, but it is low enough to combine with an electron pair from a Lewis base, such an an amine. The resulting adduct (called a boratabenzene when the base is an anion) is the typically isolated product. With the outward-pointing boron lobe now occupied, boratabenzenes and neutral Lewis-base adducts resume a more typical benzene-ring structure. They still have six pi electrons, and thus remain aromatic, because the base contributes both electrons to its bond with the boron.

I do not have a similar reference for diborinines or their hydrogenared derivatives. However, Wahab et al. [2] provide nucleus-independent chemical shift (NICS) values for several monocyclic rings which they use in the simplified computational scheme they discuss; these are shown in the figure below, taken from this reference.

As many readers know, NICS models the inherent magnetic shielding (negative value) or deshielding (positive value) within a conjugated ring, these opposing signs then being interpreted as showing aromaticity or anti-aromaticity respectively. Thus the unhydrogenated 1,4-diborinine is aromatic and even beats several more familiar aromatic heterocycles. The delocalized bonding around the boron noted above apparently applies at each boron atom here, enabling the aromatic ring structure to be retained.

However, the dihydro compound shown at the right of the figure has become antiaromatic. As was also noted earlier, when the boron is bound to a ligand the delocalized bonding around the boron is lost and we can go back to counting electrons as we would in an ordinary benzene ring. However, whereas in Lewis base adducts both electrons needed to bond the boron to its ligand come from the ligand, in dihydrodiborinenes the hydrogen ligands provide only one electron apiece and thus the remaining two electrons to form these bonds have to come from "robbing" the pi system. Thereby aromaticity in the pi system of dihydrodiborinines is lost, as seen in the NICS becoming positive.

Ultimately, we have to be careful rendering molecular-orbital structures in boron compounds because boron, uniquely among nonmetallic elements, lacks sufficient valence electrons to fill its orbitals through pairwise electron sharing alone. The unique bonding characteristics boron often adopts to compensate for this deficiency must be taken into account in order to achieve a proper rendering.

Not the answer you're looking for? Browse other questions tagged electronic-configuration aromaticity or ask your own question.

1
My text seems to say that the high(est) energy orbitals are not valence orbitals - everything else says otherwise. What's true?
14
In Hückel's rule, can n be any integer?
12
"NBO diagrams" versus MO diagrams
4
Why do halogens have odd numbers as oxidation number?
14
Can Hückel's rule be applied to inorganic compounds?
7
Is electron density a good measure of similarity between molecules?
4
Does cyclooctatetraene also have a diradical anti-aromatic electronic state?