I am confused about the energies of the orbitals after Jahn-Teller distortion of an octahedral complex. Take elongation for example.

To my understanding, since the ligands on the $z$ axis move away, there is less orbital overlap with the $d_{z^2}$ metal orbital, leading to weaker orbital interactions, leading to the antibonding orbital being lowered in energy.

1. The $d_{xz}$ and $d_{yz}$ don't seem to have the correct symmetry to sigma bond with any $p$ orbitals of the ligands. They are nonbonding in a perfect octahedron, so how can the be lowered in energy after distortion? Maybe they only appear lower relative to the $d_{xy}$?

Is there an explanation for the orbital energies using MO theory? If you could clear up my confusion that would be great. Thanks! 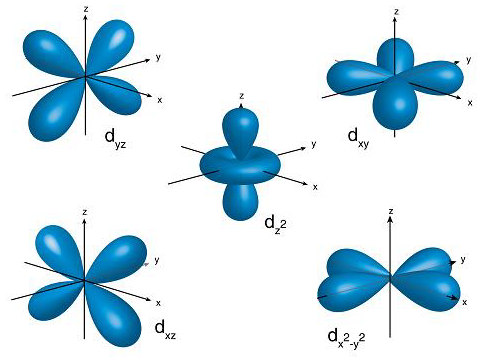 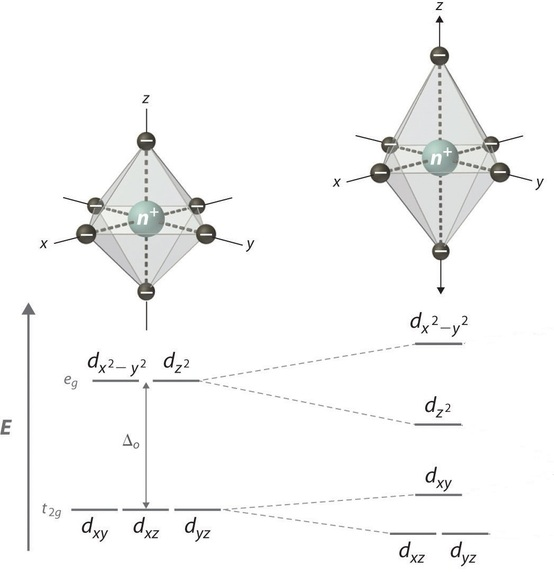 I disagree with your statement that

"The dxz and dyz don't seem to have the correct symmetry to sigma bond with any p orbitals of the ligands. They are nonbonding in a perfect octahedron"

Consider the case of a halide ligand like Cl-, which has filled p orbitals perpendicular to the axis of the M-Cl sigma bond. If these are aligned with the coordinate axes, they can each interact with proper symmetry with one of the off-axis t2g orbitals. In the axial position, these orbitals match up in symmetry with dxz and dyz.

In the perfect octahedron, all three t2g orbitals are affected equally (each interacts with the four ligands in its plane), so whether or not the ligand has p orbitals (and therefore pi bonding) does not qualtitatively change the splitting diagram. It just changes the magnitude of the splitting.

When the octahedron is distorted, however, the interactions with each of the t2g are no longer the same in magnitude. Just as with the sigma bond, as the axial ligand moves away from the metal center, the pi bonding interaction also weakens, so the d orbitals involved in pi bonding (which as you noted are anti-bonding orbitals) lower in energy.

UPDATE: Here's an image from some old lecture notes showing the difference in convention of alignment between the "MO" view and "d-orbital view" in which the "d-orbital" diagram recenters the energies around the average, even though only the dxz and dyz MO (or more properly the antibonding orbitals primarily composed of them) energies actually changes: 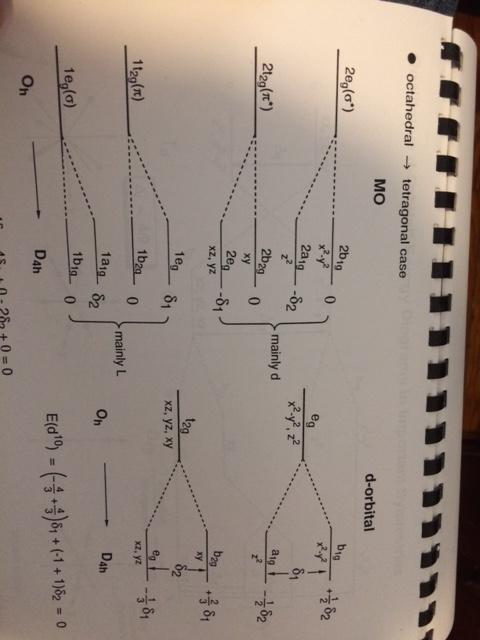 The $d_{xy}$ orbital and the $d_{x^2-y^2}$ orbitals are in the xy-plane with 4 ligands close to them. The $d_{yz}$ and $d_{xz}$ orbitals are in the yz/xz -plane where 2 ligands are further away. This means they go down in energy, as the repulsive interaction with the approaching ligands is lower. The $d_{x^2-y^2}$ is actually the "worst" energetically, since it points directly towards the 4 closest ligands. This is why it is the highest in energy. The $d_{z^2}$ orbital goes down since we just increased the distance with the ligands.

The explanation for the $d_{xz},d_{yz}$ and $d_{xy}$ remains the same. You are correct when you say that their symmetry doesn't fit any bonding ligand orbital symmetries. The lowering and raising of the energies is purely due to the new geometry. When we go from octahedral $O_h$ symmetry to $D_{4h}$ symmetry, we lose the energetic degeneracy due to symmetry. I.e. the degeneracy in the octahedral geoemetry is due to the fact that these orbitals form a basis for the the irreducible $T_{2g}$ representation. This degeneracy of the set $(d_{xz},d_{yz}, d_{xy})$ is lifted in $D_{4h}$. The orbitals belong in $D_{4h}$ to $E_g$ $(d_{xz}, d_{yz})$ and $B_{2g}$$(d_{xy})$. There is no symmetry reason for these two different sets to be degenerate in $D_{4h}$, i.e. the geometry with the elongated z-bonds. And the argument for there relative energy ordering is just the same as given before. These nonbonding orbitals are more stable if they are further apart from negative charge, i.e. the ligands. When we draw these plots we typically assume total orbital energy conservation, and to achieve this we must push one up if we lower two others. I.e. the ones in the z-plane go down and the other goes up such that the "center of energy" remains constant.

The $d_{z^2}$ orbital shown in your figure corresponds to an antibonding molecular orbital. By increasing the distance of the ligands by elongating the z-distance, the overlap becomes smaller and the energy splitting between bonding and antibonding becomes smaller, i.e. the bonding orbital(which is not shown in your figure as it lies way below the d-orbitals) goes up a bit and the antibonding goes down a bit. The $d_{x^2-y^2}$ was in the octahedral geoemetry degenerate with the $d_{z^2}$ orbital as both together formed a basis for the $E_g$ representation. This degeneracy is lifted in $D_{4h}$. In this case we conserve the center of energy of the $E_g$ set. Since we know that the $d_z^2$ orbital goes down, we must have the remaining $d_{x^2-y^2}$ orbital go up.

I used the following character tables

My wording "more stable" was perhaps a bit vague. I mean that the non bonding orbitals are lowered in energy with respect to their energy in the octahedral geometry. Why is this ? Well, the energy does not change due to overlap with some orbitals. It changes due to the lower magnitude of the coulomb interaction of the ligand orbitals with the non bonding orbitals when the ligand orbitals are further away, which is the case in the elongated geometry. Even if orbitals can't mix, they still affect each others energy simply due to the fact that they represent negative charge distributions. Bringing non mixing orbitals together raises their energy even if their shape doesn't change at all. You could calculate the potential energy due this interaction by $$ E_{pot} \propto \int dr_1 dr_2 \frac{|\phi_{nonbonding}(r_1)|^2 \sum_{\text{Remaining orbitals}}|\phi_b(r_2)|^2}{|r_1-r_2|} $$ This positive energy contribution to the total orbital energy decreases with distance between the orbitals and thus the nonbonding orbital energy decreases as the ligands move away. A term like this is also part of MO theory.

Not the answer you're looking for? Browse other questions tagged coordination-compounds molecular-orbital-theory or ask your own question.

20
Jahn-Teller Distortions in Square Planar Complexes?
23
Cyclobutadiene - Jahn–Teller effect or not?
4
Jahn-Teller distortion of [Fe(H2O)6]2+
4
Second order Jahn-Teller effect for d0 complexes
9
Should we expect Jahn–Teller distortion in bis(ethylenediamine)nickel(II)?
5
What can we learn from the energies of molecular orbitals?
0
Jahn Teller Effect on Metal Complexes
6
What is the correct molecular orbital diagram for the d orbitals in platinum for the tetraammineplatinum(II) complex?