Why are isomers of parathion less active acetylcholinesterase inhibitors than paraoxon?

Parathion itself has been found to be a very weak inhibitor of acetylcholinesterase. It normally requires metabolic activation and the conversion into paraoxon in the body to actually start exhibiting anticholinesterase activity. However, the study cited below found that active isomers of parathion, O,S-Diethyl O-4-nitrophenyl thiophosphate and O,O-diethyl S-4-Nitrophenyl thiophosphate (Compounds II and III in the cited paper, respectively), are less active inhibitors of AChE than paraoxon. I would have thought that the isomers of parathion would be more active than paraoxon due to thioethyl and 4-nitrothiophenyl being better leaving groups than 4-nitrophenyl, and thus the two active isomers of parathion would more readily form an adduct with the enzyme. I would presume that they also wouldn't need metabolic activation due to already having an oxygen atom double-bonded to the phosphorus. However, my prediction does not seem to hold true. So, why exactly are the active isomers of parathion (Reference numbers 7 and 8 in the table in the cited study) less active AChE inhibitors than paraoxon (Reference number 9 in the table in the cited study)?

Paraoxon is an irreversible inhibitor. It forms an adduct with the catalytic residue Ser203 of AChE, along with release of p-nitrophenol as leaving group. The resulting covalent phosphoester conjugate is quite stable, but also reversible when using an appropriate oxime before the complex ages. See Franklin et al. 2016 for more details.

To facilitate the discussion below, here are the key molecules: 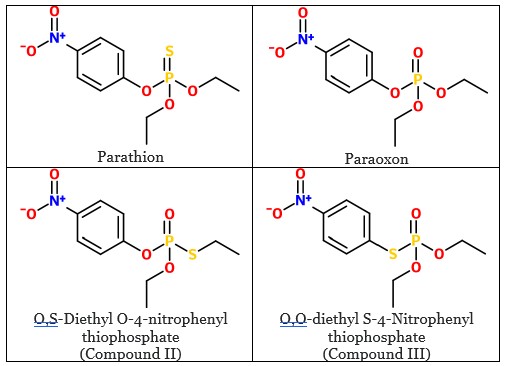 Regarding the OP's questions

Parathion is known to be metabolized to Paraoxon in the liver, likely though the action of cytochrome P450. (Chambers et al., 1991)

A phosphorothioester bond is indeed expected to be more susceptible to hydrolysis than a phosphoroester bond. Such a P-S labile linkage is ~106-fold more labile than P-O at neutral pH, according to Kuimelis-RG and McLaughlin-LW, 1995. However, Xu-Y and Kool-ET, 1998 noted the importance of unfavorable interactions of a studied enzyme with the sulfur atom, “because of the increased bond lengths or relatively poor hydrogen bond accepting ability of the sulfur relative to oxygen.” Indeed the P-S bond length is ~0.4 Å longer than P-O bond. (Knight et al., 1991)

The enzyme’s active site environment, that is beyond how good the leaving group is may help better understand the inhibition results of the molecules listed above.

The co-crystal structure of AChE with paraoxon (see Franklin reference above) deposited with RCSB as entry 5HF5.pdb provides the context of how the residual adduct binds to the AChE active site. The Franklin paper provides nice descriptive panels of this structure, but I thought I’d prepare the following image to help give more context of this interaction. In the following panel of the co-crystal structure, the residual adduct covalently linked to Ser203 is colored with cyan carbons: 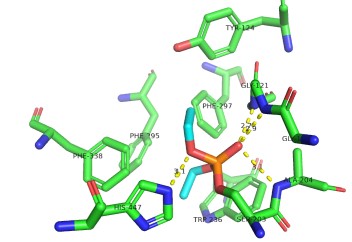 a) The oxygen of P=O accepts a Hydrogen bond from multiple amides. Given that a sulfur atom does not form as good Hydrogen bonds as an oxygen, then this enzymatic environment will not provide as good stabilization to a sulfur as it does to an oxygen. In addition, as a sulfur atom has a larger radius than an oxygen atom, there may not be enough room for a sulfur atom. These two factors may begin to explain why parathione is not as good a substrate as paraoxon.

b) One of the ethoxy oxygen accepts a hydrogen bond from His447. Having a sulfur atom at that position, such as with Compound II, would bring it too close to the imidazole, leading to steric hindrance. In addition, such a sulfur atom would not form as a productive hydrogen bond as the oxygen. Similarly, the other ethoxy forms close van der Waals interactions with Phe297 and Trp236, there may not be enough room to accommodate a larger sulfur atom. This may begin to explain why Compound II is not as good as paraoxon.

c) Similar to the above, the environment may be too restrictive to accommodate Compound III for the productive formation of an adduct.

In summary, the immediate environment of the active site may be more optimized for paraoxon than the thiol analogs; this may help explain the published SAR of the active isomers of parathion.

2
Why are so many different organophosphates able to deactivate acetylcholinesterase?
0
Why are phosphate-phosphate bonds weaker than phosphate-water bonds?
2
Why is methyl parathion less toxic than ethyl parathion?
6
Does the mechanism of AChE inhibition by Isoparathion depend on chirality?