I'd found the image attached on a website explaining the molecular orbital theory. 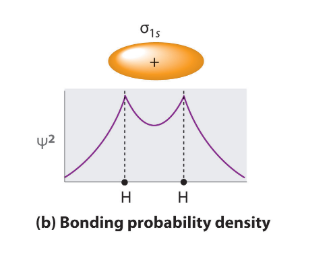 My question is, shouldn't the graph have a maximum at the middle of the two hydrogen atoms? since my intuition tells me that the electrons have a great chance of being in the middle rather than anywhere else. hmm, this train of thought has led me to another question, what exactly does this graph even represent? I mean, which electrons probababilty does it even show? or does it show us the probability of finding any electron participating in the constructive bonding.

another question that I have is this, if say, we were to excite one of the electrons into the higher antibonding orbital, what would exactly happen to this orbital, the shape I mean, would it simply cease to exist? since we're literally making the bond cease to exist (bond order=0) or would it assume the shape of this? 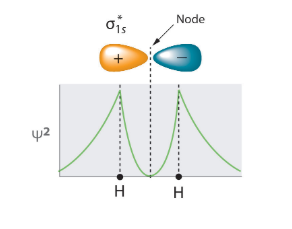 I still haven't completely grasped the true nature of such orbitals, I think it's evident from all these questions.

Bonds are in general not maxima of the electron probability distribution. Local maxima are typically centered at the nuclei. This is due to the Coloumb potential. The electron can lower its potential energy by getting closer to the nuclei so they will always try to maximize their probability around the nuclei, where all the positively charged protons are bundled. This is a bit oversimplified but in essence the reason why you see the maxima at the H position or in general at the position of nuclei.

To see bonds, you should look at the difference of the probability density of two lonely hydrogens and a H2 molecule. I.e. calculate the electronic wavefunction for a single Hydrogen Atom and then add the plots of two such single hydrogen calculations placed at the positions as in H2. Compare this with the plot coming from the H2 calculation and you should see that the H2 distribution has a higher density in between than the two unbonded hydrogens simply taken together.

Bonds as we draw them in simple chemistry are not rigorously defined mathematically and more or less a useful approximation to rationalize reactions without doing difficult calculations. There are ways to obtain a mathematical definition of bonds but these definitions are not neccessarily agreeing with the way that we draw bonds in general chemistry. One such model is Atoms in Molecules which evaluates the electron density and its topology to define bonds. But there are other models, for example Electron localization functions and i am sure that there are more, unknown to me.

Overall it is important to realize that bonds are a useful concept but they have no unambiguous clear cut underlying physical definition. Physics/Quantum mechanics yields no equation that unambiguously defines a chemical bond.

Not the answer you're looking for? Browse other questions tagged quantum-chemistry bond molecular-orbital-theory or ask your own question.

6
Just how quantized are energy levels?
10
How do Electrons Cross Nodes in Orbitals?
1
formation of σ molecular orbital in H2
1
The MO and unpaired electrons
10
Can orbitals in a molecule be occupied via excitation like they can in atomic orbitals?
2
FMO analysis of the [3,3] Sigmatropic reaction regarding geometry. Is it accurate?
6
Maximum Local Value for the Electron Density