Why are halogens base sensitive groups (Wolff-Kishner Reduction)?

So while studying about Wolff-Kishner reduction reaction to form alkanes from carbonyl groups. I read that it is not suitable for base sensitive groups as the environment is highly basic and as an example the following reaction was given: 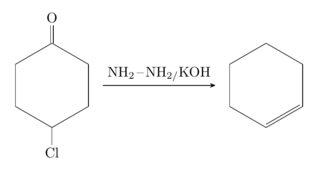 Now the desired product that should've formed is 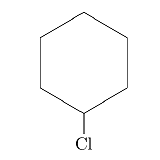 But this doesn't happen as -Cl is a base sensitive group and so reacts with KOH. But how can a halogen be base sensitive when it already has 7 e- and is highly electronegative? How is it possible for it to react with OH-?

Also, I don't understand the reaction mechanism of this reaction so can someone please explain how this takes place?

You've probably realised already that a possible side reaction is the SN2 nucleophilic substitution of Cl by HO-, which would look like this:

Evidently, this is not the product we actually get. Hydroxide ions are considered 'hard' nucleophiles, as they have a high negative charge density, and they tend to react best with 'hard' electrophiles with high positive charge density. The electrophilic carbon here is reasonably 'soft' whilst the proton adjacent to it is considered 'hard' due to its small size (you can learn more about this here). As a result, hydroxide ions like to act as bases instead of nucleophiles, and the mechanism favoured is not the SN2 shown above, but in fact the competing E2 elimination shown below.

This proton may not look particularly acidic, but formation of a new alkene alongside loss of a reasonably stable chloride leaving group drives the deprotonation.

Another contributing factor is that whilst the substitution has a reasonably small change in entropy, the elimination results in a greater number of species than in the reactants, so has a large positive entropy. This is relevant because Wolff-Kishner reduction is usually done at a reasonably high temperature, and entropy becomes a greater influence on the spontaneity of a mechanism as the temperature increases. This further favours E2 over SN2.

The chloride is considered a base-sensitive group for the above reasons, and this second pathway is inevitable alongside a Wolff-Kishner reduction in a highly basic solution.

I think the reaction as you told will be very inefficient. To explain why, I quote the paragraph from page-905 of David R Klein's Organic Chemistry (*):

"The pH of the solution is an important consideration during imine formation, with the reaction being greatest when the pH is around (4.5). If the pH is too high (i.e: no acid catalyst is used) , the carbinolamine is not protonated, so the reaction occurs more slowly. If the pH is too low, most of the amine molecules will be protonated to give ammonium ions, which are not nucleophilic. Under these conditions, step 2 of the mechanism occurs too slowly. As a result, care must be taken to ensure optimal pH of the solution during imine formation"

Though the above paragraph concerns imine formation, it applys equally well to hydrazone formation which occurs as an intermediate in the standard scheme of wolf Kishner reduction of ketones.

The mechanism of the reduction can be found here

Not the answer you're looking for? Browse other questions tagged organic-chemistry synthesis carbonyl-compounds halides hydrocarbons or ask your own question.

0
Which one is the stronger base?