I have some sets made by well-known Danish plastic toy manufacturer from my childhood which I've been reviewing recently. Most of the elements was in a condition I was expecting (some yellowing, a little bit damage), but not with the smaller tyres. Originally, I found them quite oily/greasy by touch with some even leaving a bit of, what seemed to look like, liquid residue when removed from plastic wheels. Oh, and they were also full of domestic dust.

Didn't pay too much attention as I was going to clean them with the rest of bricks in washing machine using mild detergent. Upon drying I've check affected elements again and found that plastic elements exposed to rubber tyres were clean. These small tyres however, while their conditions was much better, they still had a bit of oily feeling by touch.

Tyres having this issues are up to 30 years old and rather small. Bigger ones are from the same time period but seem to be made of different material and did not show any signs of being oily even prior cleaning.

Affected tyres look like that if it matters (pictures just show the form, not the condition): 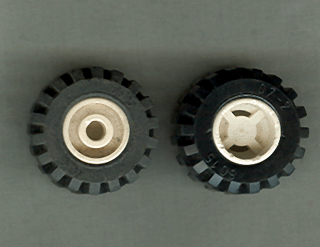 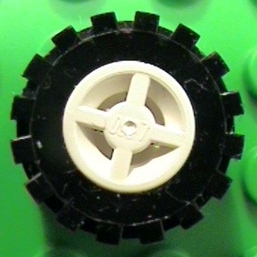 So I'd like to know few this around this issue:

Disclaimer. I have not included a brand name for couple of reasons. First, my interest is purely from science/practical point of view. Next, I am not looking to accuse any one of some issues in case there are any. And last reason - idea was to hint a company, as I thought some may have better knowledge of exact materials used in above elements.

The "rubber", or elastomer, likely has plasticizers to soften the material and make it more elastic and less brittle. These often migrate to the surface as parts age. Some of these plasticizers for elastomers include:

Another possibility is depolymerization, actual breakdown of the plastic. At room temperature, this process is slow, though it could contribute to that sticky surface layer.

As for safety, you might check on rules at the time and place the toys were made. Modern toys are made with safety in mind, but plastics have had a bad rap in the past, such as causing liver damage to workers in vinyl production. Caveat emptor.

Not the answer you're looking for? Browse other questions tagged plastics rubber or ask your own question.