What does orbital mean, exactly? [duplicate]

My teacher told me that orbital is the probability distribution data of the electron around nucleus which is amplitude data in a way.

An example of how my teacher actually told what it means involves that you know three possibilities for a coin flip to get head and tail. Therefore, this table is what my teacher says is orbital:

Whereas in my book it says that it is the space occupied by the electron around the nucleus of an atom where the probability of finding an electron is the maximum.

Can you please show a photo that how does it also look exactly? Both the things mean different. What does it mean exactly then? 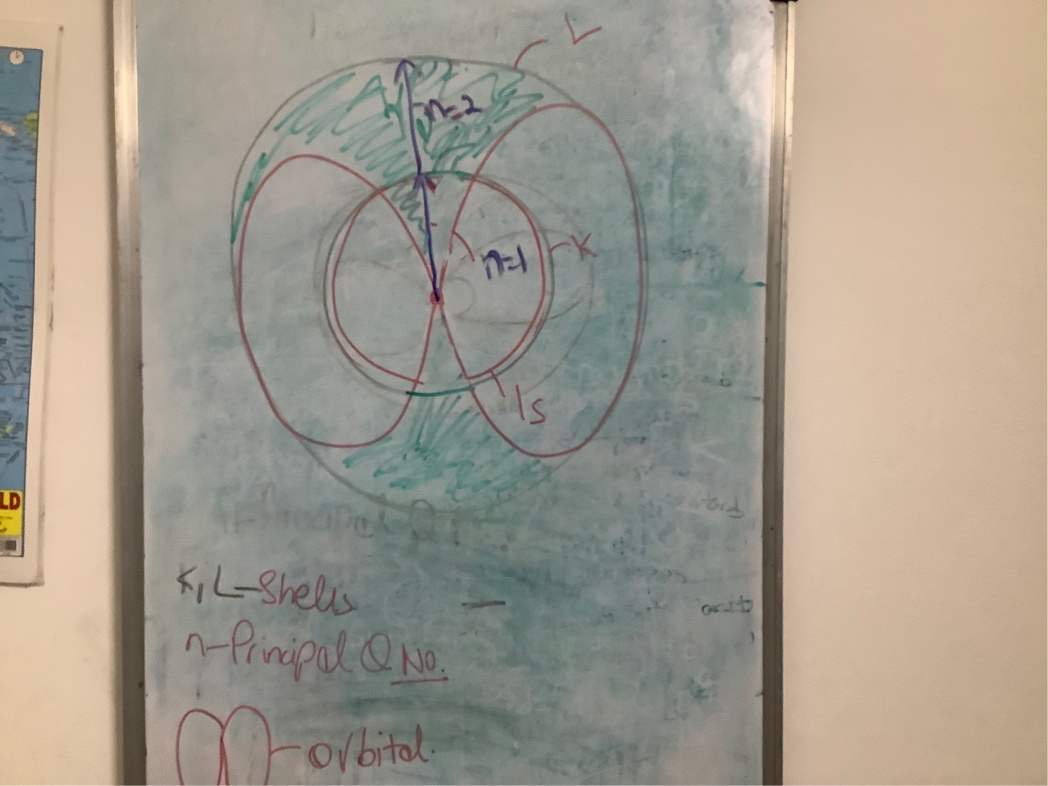 It sounds to me like your confusion is why these two definitions are describing the same thing. I will attempt to clarify that. My interpretations/slight rephrasings of these definitions are

The orbitals around an atom are like "slots" that you can put electrons in.

In a simplified model: You can think of them like regions of space where the electrons can be. If I put an electron at r = 1, then the next electron cannot be at the same location, and must go in the next lowest energy slot, r = 2.

A bit more accurately, the orbitals are probabilities associated with regions in space, ie the probability P = f(x,y,z) is function of the spatial coordinates. That means that all the orbitals are overlapping, having a value at every (x,y,z) coordinate in space around an atom. The individual orbitals are described by different functions though.

The previous example might turn into the first electron having a high probability (say 80%) of being at r = 1, and a low probability (the other 20%) of being outside that. This is the distribution with the lowest energy, because the electron spends most of its time close to the positive nucleus. The next electron would go into the next lowest energy slot (higher than the first). This distribution may have a highest probability peak of 80% at r = 2, and 10% at r = 1, and 10% spread over everywhere outside r = 2. The location at r = 1 is therefore split 80% into orbital 1, 10% into orbital 2, and the remaining 10% over all the other orbitals such that the sum of the probabilities of all the orbitals add up to 100%.

Conclusion The orbitals are thus a function P(x,y,z) which is a probability distribution (Def. 1) over space (Def. 2), and while the functions overlap, though with different values at each region, they have characteristic maxima.

Can you please show a photo

Here are two websites that both have lots of good visualisations http://csi.chemie.tu-darmstadt.de/ak/immel/tutorials/orbitals/index.html

^ For atomic (s,p,d,f) orbitals go to Hydrogenic : visualisations, and click on the individual pictures.

Remember that the orbitals are functions of All space, and therefore infinitely large, and cannot be shown in a finitely-sized picture. However, much like a Gaussian distribution, you can draw a boundary and say that the electron has 99% probability of being within this region. These probability contours are what is usually shown, and what you are looking at on these websites.

Electrons settle into the lowest energy state. The orbitals that have the peaks of their distributions at larger radii are higher in energy. A word of caution about definition 2:

Whereas in my book it says that it the space occupied by the electron around the nucleus of an atom where the probability of finding an electron is the maximum.

The orbital is not the region where the probability distribution is a maximum, it is the entire distribution. However, the orbitals can be characterised by the location of their maxima. This is simplest for the s-orbitals, which are spherical: Higher energy orbitals have maxima at larger radii, and thus we can can give a first attempt at drawing orbitals (and a first attempt at thinking about them) as circles around the nucleus with radii equal to the maximum probability radius for a given distribution. This says that the 1s orbital has a maximum probability at r = 1, the 2s has a probability maximum at r = 2, ... and so on. However, the difference is, that the orbitals are not just at the specific spatial location r = n, but are a distribution across all space, with characteristic maxima at these locations.

I hope this helps. "What is an orbital?" is a good question, that I think every chemistry student asks as some point, sometimes more than once.

Not the answer you're looking for? Browse other questions tagged quantum-chemistry electrons orbitals atoms atomic-structure or ask your own question.

10
What exactly is an orbital?
11
Is the notion of orbitals different in theoretical chemistry?

5
Quantum mechanical model of atom and the quantum numbers
12
How do Electrons Cross Nodes in Orbitals?
3
Meaning of the 1s orbital diagram
10
What exactly is an orbital?
3
What are the physical manifestations of radial nodes?
6
Why is there an orbital angular momentum if the electron isn't properly revolving around the nucleus?
1
Atomic Orbital and Wave Function
3
When people say "The energy of an orbital depends on its ℓ value due to screening effect" , what is screening what?