On new year's eve, after a splendid red and an assortment of sumptuous repasts, I made a bold remark which, on further consideration, may turn out to be incorrect. Unless! Unless I can concoct an impressive scientific explanation - for which I will need your input

...I have read "Is it true that an evaporating molecule has the same kinetic energy as a molecule in a pot of boiling water?" on this site. I don't think it answers this question. 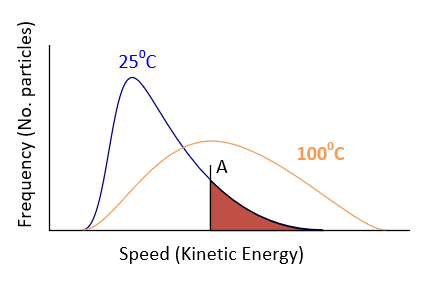 If I assume that Boltzmann's distribution works for liquids (I get that it's meant for ideal gases) and assume 9 degrees of freedom for water molecules then: 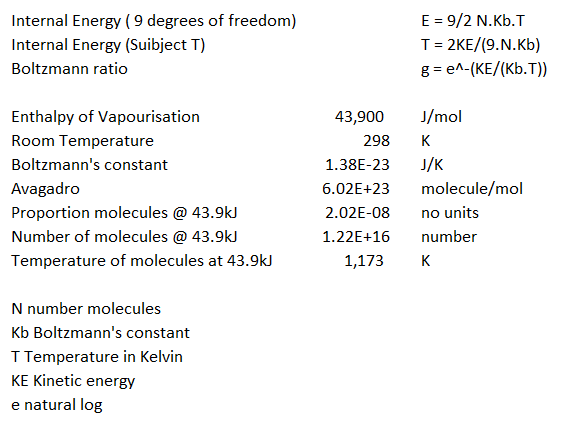 This suggests (if it's even remotely correct) that a very small number of molecules in room temperature water are moving very fast and therefore are at very high temperatures? It's not a relationship per se but, if correct, it does affirm the initial idea that evaporating water molecules are "hot"...even boiling?

Thanks for the input and careful consideration. The chart below is my attempt to summarise my thoughts inspired by your comments. It's rendered in excel from the equation shown and accords well with the chart for water included in Boltzmann distribution for water which didn't extend far enough on the x axis for what we're trying to show here. Thanks for the heads up re energy distribution rather than speed - much easier to understand. 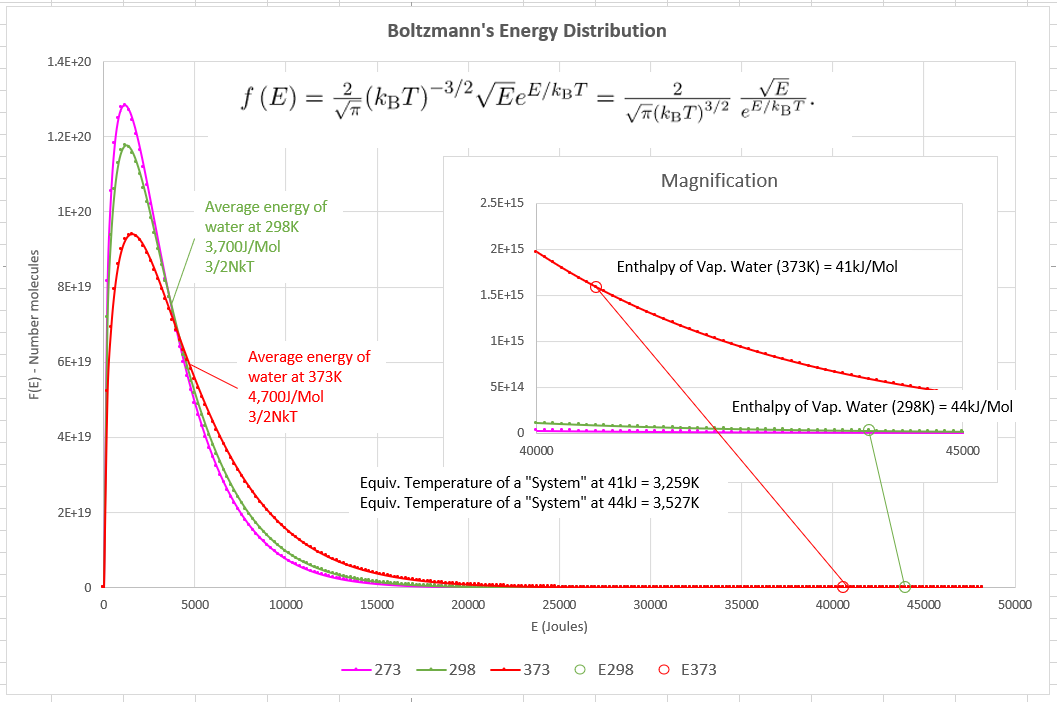 The equation comes from BC Campus Molecular Speeds I have ignored degrees of freedom effects in this and the other equations on the chart.

Clearly the energy of evaporating water molecules (let's say liquid immediately before take off), at room temperature (25 deg) is significantly higher than the average energy of boiling water.

What can be said about the little molecules about to liberate themselves from my drying undies then? The original question precipitated from the idea that molecules evaporating from washing 'boiled'.

So...to all intents and purposes, the undie vaporizing molecules are doing what the boiling water vaporizing molecules are doing ....boiling (but they're not at 100 degrees, and we can't really measure their temperature - maybe half a case of beer then?). We don't feel the heat of the highly excited little blighters because it's a (relatively) small number of individual molecules within a bulk liquid at an average temperature of 25 degrees.

In coming to the answer from a kinetic energy perspective, I found this paper Velocity of a droplet evaporated from waterwhich measures and models the speed of protonated water molecules evaporated from nano droplets. Speeds of non-protonated molecules in bulk liquid water will vary but it was encouraging to see that the speeds (say 2000m/s) were of an order of magnitude commensurate with with Boltzmann's distribution for water in Boltzmann distribution for water. On this curve, the experimental speeds would also be out in the flat area of the curve equivalent to my energy curve above.

You have to specify whether you are talking about the kinetic energy just before the water molecule breaks the hydrogen bonds to its neighbors or just afterwards. A millisecond before or after the event, of course, the average kinetic energy will be determined by the bulk temperature.

One way to picture this is two water molecules "colliding" at the surface of the liquid. In order for one water molecule to leave the liquid phase, the collision needs to have at least sufficient energy to break the hydrogen bonds (and perhaps some more to overcome an activation energy). When that happens, the total kinetic energy of the molecules in the collision will be lowered (because energy is conserved). What exactly we mean by "collision" in the liquid phase is not so important because the temperature-dependence of the kinetics of the process is still governed by the Arrhenius equation (and the Boltzmann distribution of collision energies) even when we go from simple mono-atomic gases to wicked-complicated liquids.

The energy required to break the water loose (~40 kJ/mol, according to Poutnik's answer) is much higher than the median collision energy at room temperature (~2 kJ/mol). Whether the water molecule has more or less kinetic energy than the average after it enters the gas phase is not so important. The important part is that it had an unusually high energy, and most of that excess energy went into breaking the hydrogen bonds.

The kinetic energy of the water molecules that just evaporated is not exceptionally high or low. As the molecule leaves the liquid phase, the available energy is somehow partitioned between that water molecules and the ones it leaves behind. Your question boils down to whether the evaporative cooling of the liquid is temperature-dependent. I'm not sure if there is an experiment that would address this, and whether it has been done already.

The diagram has a lot of problems, so I would not use it for discussion. The curve does not change that much with temperature, the shaded area is too big by far (according to Poutnik's answer, a molecule on the surface of the liquid has about a one in a million chance per collision to get into the gas phase at 373 K). Here is a diagram showing how the energy available from collisions changes when the temperature is raised from room temperature to body temperature. You can see that the changes for the bulk of energies are subtle. If you zoom in to the regions of exceptionally high collision energies, however, you can see that the changes are substantial.

The latter is then approximately proportional to $T$.

If these average values were not equal, the system would not be in thermal equilibrium.

@theorist In case the gas phase consists exclusively ( or almost ) from water molecules, then majority of gas molecules collisions with liquid water leads for them to becoming a part of the liquid.

Those collisions that are not part of mass exchange would have to cause nonzero thermal transfer, what is not possible when temperatures of phases is equal.

BTW, I do not think, imply nor say that liquid leaving probability is KE independent. I suppose there is a KE threshold to leave liquid, to overcame the mean bonding energy. OR, perhaps, rather a threshold of the normal component of the velocity vector ( or equivalent energy for 1 degree of freedom ), as the molecule motion has to be properly oriented.

I have created a quick and dirty model to estimate the percentage of vapour molecules that condense after hitting the liquid phase.

Than I have calculated saturated vapour pressure and related vapour density from the Clausius-Clapeyron equation.

Then I estimated the condensing fraction as the Boltzmann fraction multiplied by water/vapour density ratio.

But still, it seems to me the system would be just much closer to equilibrium than the prior assuming of all condensing vapour molecules, that is not in equilibrium.

Interesting would be the result, if

This is a very interesting question!

Also, I don't believe it is a duplicate of the other cited questions, since those seem to concern the average kinetic energy of liquid vs. gaseous water, while the OP is asking whether those that evaporate from the liquid are at the tail of the distribution, and whether there's a relationship between the KE of this subpopulation and the average KE of those in boiling water.

I'll give a somewhat speculative answer, which might serve as a springboard for others to contribute more.

We know that, for chemical reactions, the subpopulation that reacts comes from those with sufficiently high energy (which can be both kinetic and potential) to get over the activation barrier.

Intuitively, one would expect that to be the same for evaporation—it's those molecules that are at the surface, and have sufficiently high KE, that evaporate. And the reason the evaporation rate increases with T is that a greater proportion of molecules meet that criterion.

So what you're asking is whether there is some relationship between the cutoff for sufficient KE to evaporate, and the KE needed for boiling.

I suspect the answer is no, since the boiling temp changes with ambient pressure, yet I don't believe the ambient pressure significantly affects the KE needed to evaporate (it has little effect on the chemical potential of the liquid water).

However, I don't believe the KE needed to escape the liquid would be significantly affected by ambient pressure because, as I mentioned above, there is little difference between the chemical potential of liquid water under 1 atm pressure and 0.1 atm pressure.

While it certainly does the former (minus the "tremendously"), the latter for sure does not happen.

The quantitative answer is that any water molecule that leaves the surface has just lost the evaporation enthalpy (strictly speaking its binding energy to the molecules around and below it). If it has any kinetic energy left, it can fly off.

Not the answer you're looking for? Browse other questions tagged water boiling-point kinetic-theory-of-gases statistical-mechanics evaporation or ask your own question.

3
Kinetic energy of molecules in liquid state?
8
What are the degrees of freedom that define the temperature of an ionic solid (such as sodium azide)?

3
Temperature in the Maxwell-Boltzmann Distribution
14
Justification for Freezing Point Depression & Boiling Point Elevation in Solutions?
5
How does ice melt?
6
Does the temperature of liquid ammonia stored at high pressure, room temperature suddenly drop to −33.35 °C when poured into a bowl?
3
Kinetic energy of molecules in liquid state?
5
Finite probability from discrete distribution and zero probability from continuous distribution in Maxwell-Boltzmann statistics
9
Is it true that an evaporating molecule has the same kinetic energy as a molecule in a pot of boiling water?
0
Latent heat of vaporization/evaporation