Linking an electrochemical cell to an electrolytic cell

Electrolysis occurs when a non-spontaneous redox reaction occurs when electrical energy is put into it. An electrochemical cell functions by using two redox reactions to facilitate movement of electrons. So for an alkaline battery, the zinc anode will oxidize and release electrons, which will flow through the circuit to reach the manganese ($\ce{MnO2}$) cathode, which will be reduced, allowing more electrons to flow through the circuit without buildup of electric charge. I assume here that both reactions are spontaneous, and the electron buildup in the anode prevents further zinc oxidation when the circuit is incomplete. $$\ce{Zn(s) + 2OH- (aq) \rightarrow ZnO(s) + H2O(l) +2e-} [E^\theta= 1.28V]$$ $$\ce{2MnO2(s) + H2O(l) + 2e- \rightarrow Mn2O3(s) +2OH- (aq)}\ [E^\theta= 0.15V]$$

Also, seeing that the $\ce{MnO2}$ cathode has a relatively small $E^\theta$ value, won't it be hard to trigger oxidation of the electrolytic anode? When connected to the electrolytic cell, do the cathode and anode of the electrochemical cell now work totally independently? If that is the case, the voltage of the battery should not be considered, but instead the electrode potentials of the anode and cathode, but that is usually not the case. What am I misunderstanding about this?

edit 2: Added a picture to better show my doubts. If the galvanic cell is linked to an electrolytic one as shown here, the galvanic anode and the electrolytic cathode are linked and seemingly acts as a separate cell. The same thing can be said about the other two electrodes. If this is the case, doesn't the galvanic anode and cathode each act independently of one another, and therefore the electrode potential of the individual half cell must be considered? If they are actually linked, how? 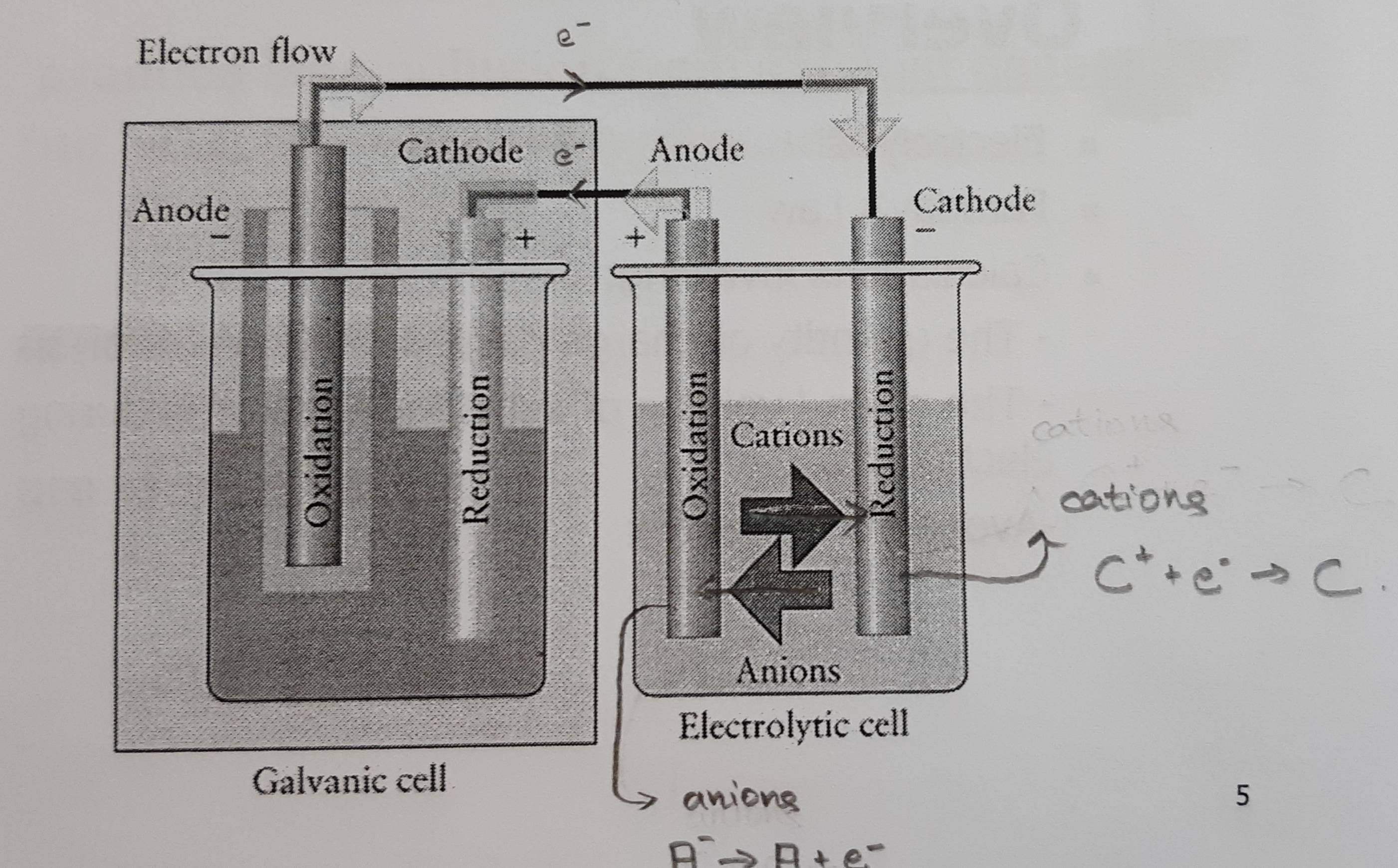 For an electrolytic cell, a galvanic cell is nothing else but a power source.

For a galvanic cell, an electrolytic cell is nothing else but a powered electronic circuit.

The reason for it is simple, based on the electrostatic neutrality requirement and enormous forces between unbalanced charges. Imagine you managed to push the current 1 A for 20 s through the wire, without being balanced by ionic motion. The comparable unbalanced charge causes in atmosphere a lightning several kilometres long.

You seem to be mixing a couple of things. One important clarification regarding

The listed electrode potentials are valid only in relatively dilute solutions under very specific conditions. Don't apply the half cells on a dry cell or an alkaline cell. In short, those numbers are not meaningful for an alkaline battery or a carbon-zinc dry cell. Those commercial cell compositions is just a magical mixture, which is more art than science. Battery technology is not that trivial. Think why there are not many types of batteries despite 300 years of research?

0
How do you connect a battery to a galvanic cell in order to reverse the flow of electrons?
1
Reaction in Zinc-Carbon-Ammonium Chloride battery