What causes little spikes in a flame? [closed]

Ask Question
Asked 8 months ago
Active 8 months ago
Viewed 103 times
1
$\begingroup$
Closed. This question is opinion-based. It is not currently accepting answers.

I have a lighter at home which everytime I use it, generates little spikes (see picture below) which eventually disappear.
The Spikes are not an effect generated by the camera. I can confirm that since I made the picture.
Essentially this means the flame does not have a nice uniform flame shape, but is interrupted by the spikes. 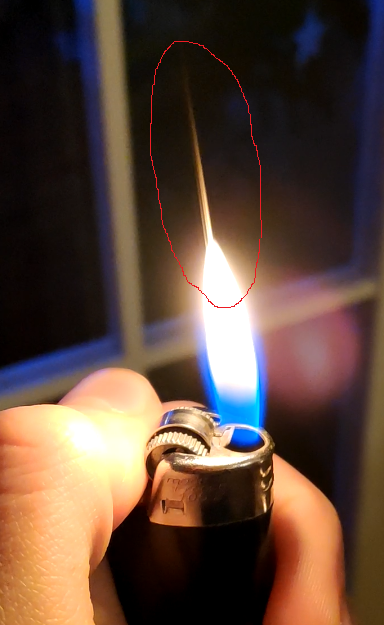 Does someone know where this is comming from?

EDIT:
@JamesGaidis suggested to try holding the lighter sideways. It can be observed that the spot of the spike has roughly the same position when holding it sideways (left picture) 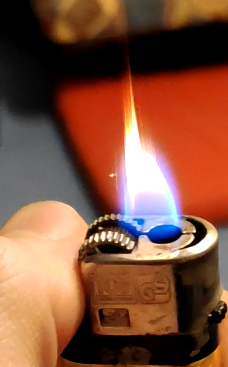 A different lighter with the same effect, but with the additional feature of beeing able to reduce the gas flow shows, that the spike is independent of the quantity of the gas (right picture).


James did also suggest to light the lighter from an external source, and in this case, no spikes show up.
This implies that its not the gas alone generating this effect, but has rather something to do with the stone.


I don't really know if this is has to do with chemistry at all, or if it has more to do with physics. If thats the case, feel free to redirect me towards the correct SE site.

Browse other questions tagged thermodynamics quantum-chemistry heat combustion or ask your own question.

109
Is there a general consensus on the causes of the alpha-effect?
2
How much Carbon Dioxide would be required to displace enough oxygen to prevent ignition?
3
Why might my limelight experiment have failed and how can I improve it?
6
What causes incomplete combustion?
2
What causes transition from smoldering combustion to flame combustion?
4
Statistical entropy of perfect gas and indistinguishability