When does Alcohol act as Solvent and as a Nucleophile?

I was recently solving problems related to Alcohol.

and its solution is

Here, you are doing an esterification, done with your carboxylic acid and methanol with $\ce{H+}$. The problem is, the yield for such reaction is quite low (an average 67% for a primary alcohol, because of the equilibrium between esterification and hydrolysis). A solution to increase it is to use an excess of reagant (preferably the cheapest one). And the simplest way to have an excess of methanol (that is really easy and cheap to get) is to use it as a solvent.

Hope this helps! And for further explanations, see Fischer-Speier esterification.

The proposed solution to this roadmap problem has several errors. I am assuming that $\ce{K2Cr2O7}$, methanol and $\ce{LiAlH4}$ are employed in excess. In the oxidation of 1 (A), chromic acid, $\ce{H2Cr2O7}$, is formed from $\ce{K2Cr2O7}$. To obtain the purported hydroxy acid 6 suggested in the solution, exclusive oxidation of the primary alcohol would be required, a pathway that leads to lactone 5 via hemiacetal 4. One could argue that hydrolysis of the lactone occurs to form 6 but, if this were the case, then hydroxy acid 6 would oxidize to levulinic acid 2 in the presence of excess oxidant. Clearly, levulinic acid 2 fits the formula $\ce{C4H8O3}$ presented in the original problem. As the problem is set forth, oxidation of the secondary alcohol is faster than that of the primary alcohol of diol 1.

The Fischer esterification of levulinic acid 2 leads to methyl levulinate 3 ($\ce{C6H10O3}$). Such an esterification is invariably conducted with excess methanol. The reduction of 3 with $\ce{LiAlH4}$ is conducted in a solvent such as ether or tetrahydrofuran (step 1) and then decomposed cautiously with water (step 2) to reform diol 1 (A) by reduction of both the ketone and ester groups of 3. Clearly, this sequence of transformations is an academic exercise and not one to be conducted in a laboratory. Hopefully, the person who provided the solution was not the same person as the one who created the question. 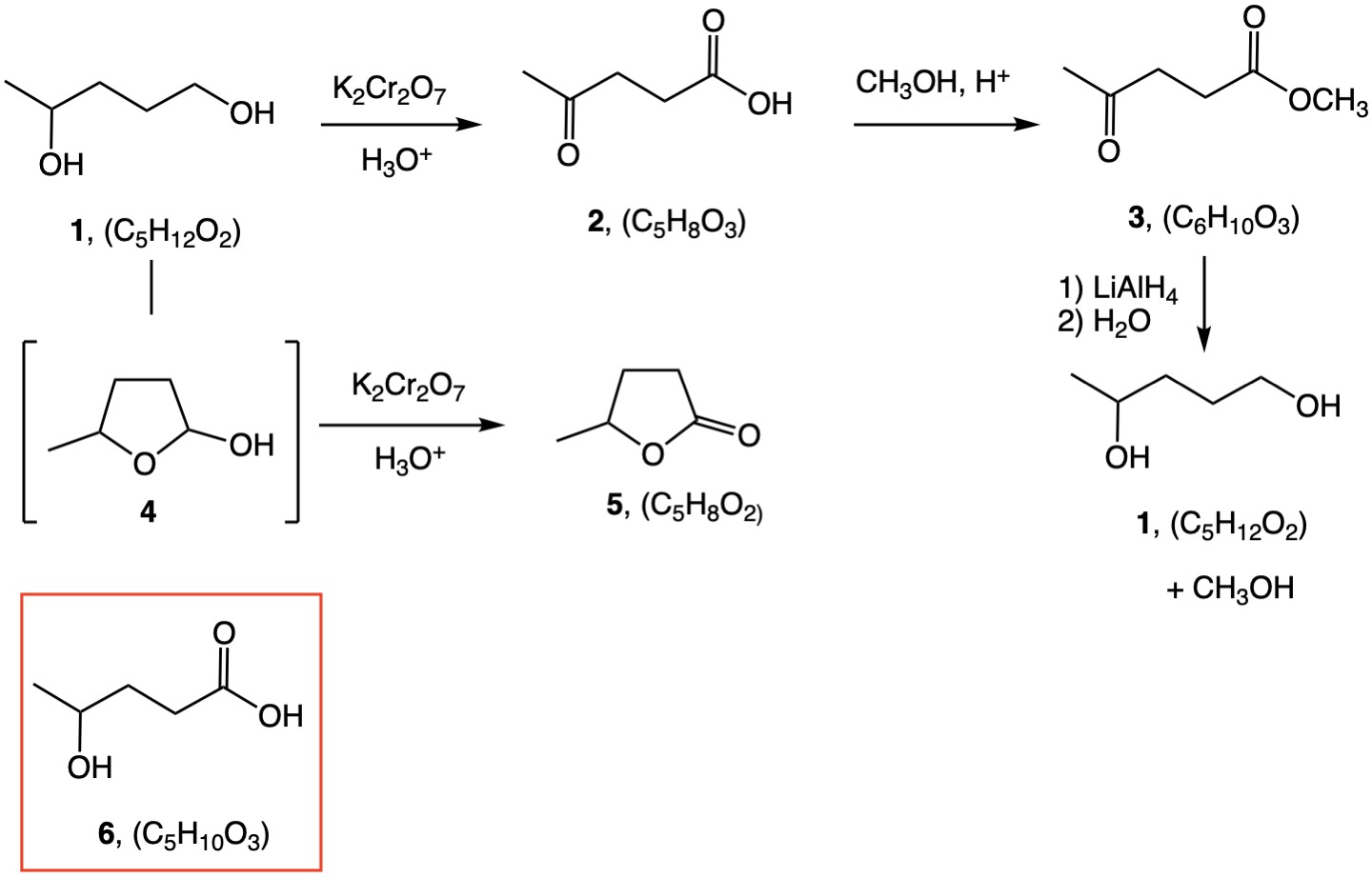 Not the answer you're looking for? Browse other questions tagged organic-chemistry alcohols solvents nucleophilicity or ask your own question.

4
Why does phosphorus tribromide act as a Lewis acid (electron acceptor)?
2
Why is sodium methanethiolate still a better nucleophile than sodium methoxide when the solvent is ethanol
7
How does the solvent determine whether mono- or tribromination of phenol occurs?
1
How to choose alcohol solvent for organic extraction?
1
Why does Oxygen act as Nucleophile over here?