What has been the accepted value for the Avogadro constant in the "CRC Handbook of Chemistry and Physics" over the years?

It would seem that the CRC handbook is a reasonable source for the accepted value of the constant since it has been updated almost yearly.

I dislike offsite image links since they disappear over time. So below is Table 1 from andselisk's comment on the question.

The paper itself is behind a firewall and I can't see it. 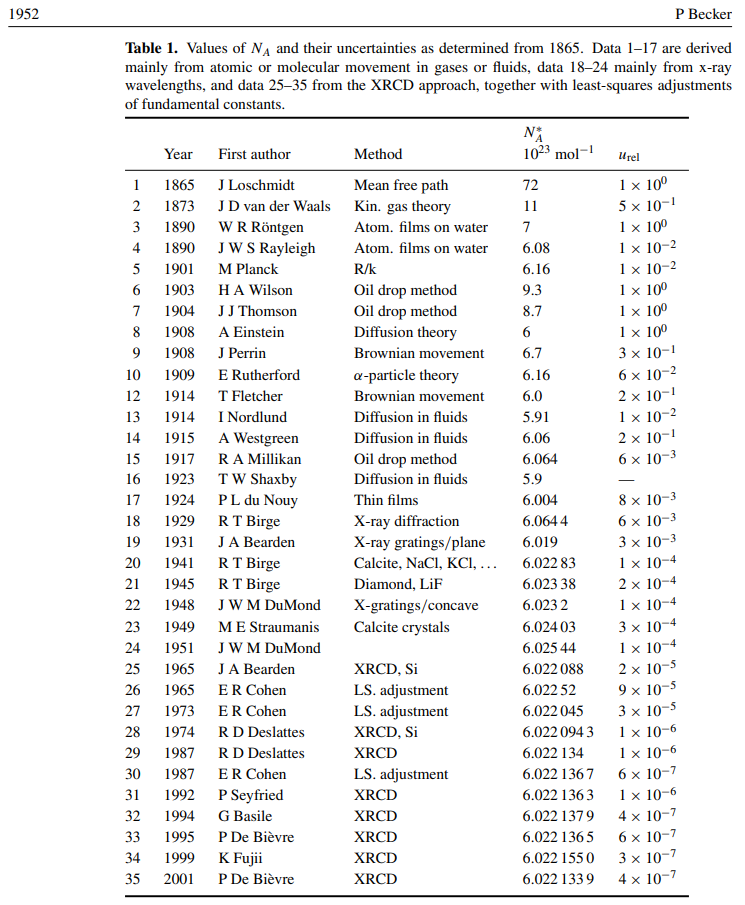 Please edit the table to include missing data

Avogadro constant in the "CRC Handbook of Chemistry and Physics"

The link is to the facsimile edition.

This version is online at HathiTrust. An old edit of the Wikipedia article CRC Handbook of Chemistry and Physics indicates the third edition has 322 pages.

4th and 5th edition See likely that these editions are same as 3rd and 6th.

In at least the 8th through 12th editions of the CRC Handbook the Table of Contents contains a category "Miscellaneous Tables" which has a link to "Atomic and Molecular Constants" which references the "Smithsonian Tables" and gives a value of $6.06\times10^{23}$ for the "Number of molecules in a gram molecule".

The reference to the Smithsonian Physical Tablesdoesn't give any more indication as to which tables those are. This seems to be the 2nd reprint of 6th rev. ed. Prepared by Frederick E. Fowle. in 1916

There is another version of the table Number of Molecules in a Gram-Molecule which has four values.

These editions have identical entries, listing it as "Avogadro's number" in a table named "Probable Values of the General Physical Constants" which is in the "Miscellaneous Tables" section of the Table of Contents. The tables cite Raymond T. Birge: The Physical Review Supplement, Vol. 1, No. 1, July, 1929, as the source for the entire "Probable Values of the General Physical Constants" table. Note however that the value given here doesn't match the one attributed to R T Birge in 1929 in Becker, P. "History and Progress in the Accurate Determination of the Avogadro Constants"

Listed as "Avogadro number (chemical scale)" in "New Table of Values of the General Physical Constants." The table is listed in the "Miscellaneous" section of the Table of Contents.

Cites: Raymond T. Birge: The Physical Review Supplement, Vol. 13, 233, 1941 as the source for the entire table. (This is the value listed for R T Birge in 1941 in Becker, P. "History and Progress in the Accurate Determination of the Avogadro Constants". With the quoted error the extra 3 is unnecessary.)

Found in table of "Atomic Constants" which references "A survey of Atomic Constants (1955) by J. A. Bearden and John H. Thomsen, The John Hopkins University"

This cites Raymond T. Birge: Reviews of Modern Physics 13, 233, 1941. This matches the value attributed to Birge in the same year by Becker. (Because of the error the extra 3 is superfluous so I left it off.)

Table cites: Data from CODATA Bulletin No. 11, ICSU CODATA Central Office, CODATA Secretariat: 19 Westendstrasse, 6 Frankfurt/Main, German Federal Republic (copies of this bulletin are available at no cost from this office).

Table cites: Data from CODATA Bulletin No. 11, ICSU CODATA Central Office, CODATA Secretariat: 51 Boulevard de Montmorency, 75016 Paris, France (copies of this bulletin are available at no cost from this office).

Cites 1986 CODATA values as published in E. Richard Cohen and Barry N. Taylor, Journal of Research of the National Bureau of Standards, 92, 85, 1987.

Based on pattern of CODATA being used for 4 years.

Got value via "Look Inside" at Amazon

Based on the 2006 CODATA recommended values

Based on pattern of CODATA being used for four years.

2018 - exact by new definition of constant

Here are plots of the historical CODATA and CRC values for $N_{\text {A}}$ listed in MaxW's posts. Plots were made in Mathematica.

I've provided plots with successively later lower bounds for the dates, and correspondingly smaller $N_{\text {A}}$ ranges, so that the shrinking uncertainties in later years can be visualized.

The last three of the four CRC values shown each correspond to the CODATA value from 3–5 years past. This suprised me—especially with its emphasis on yearly updates, I would have thought the CRC would be kept more up-to-date than that. I wonder if this is generally the case for data in the CRC—that data updates stop a few years before the publication date, to give time for proofreading, typesetting, etc. 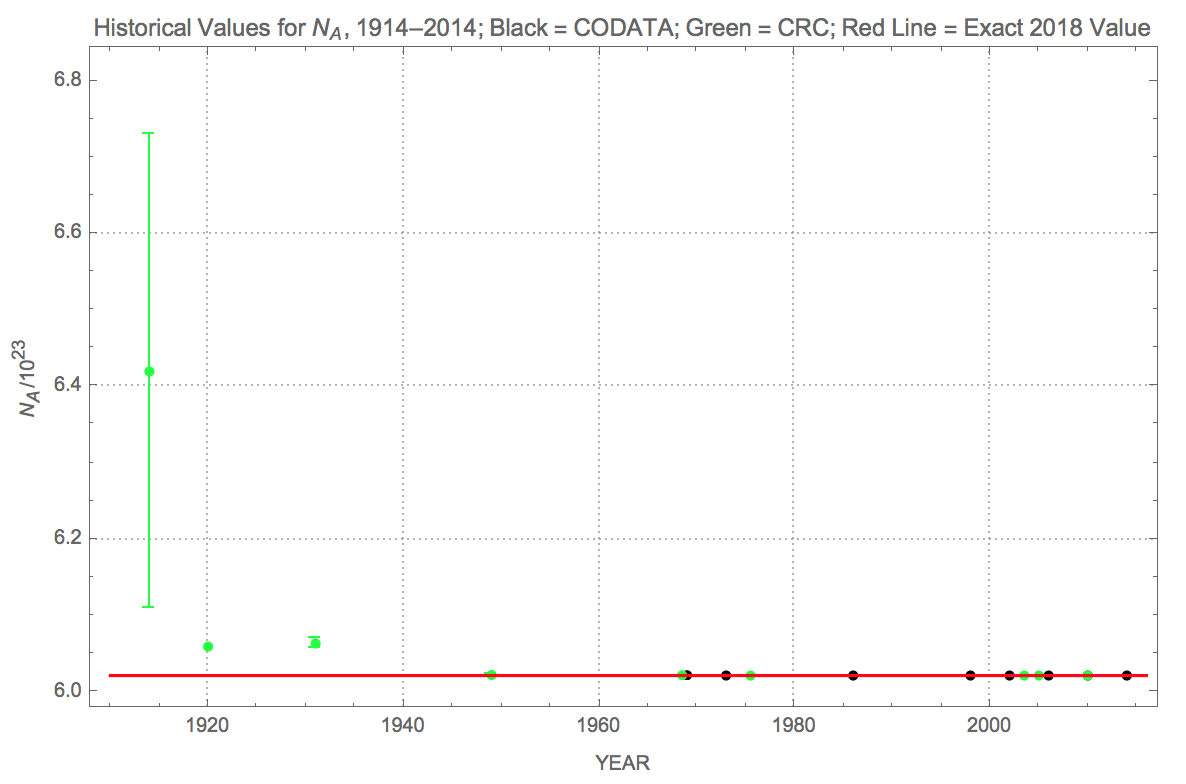 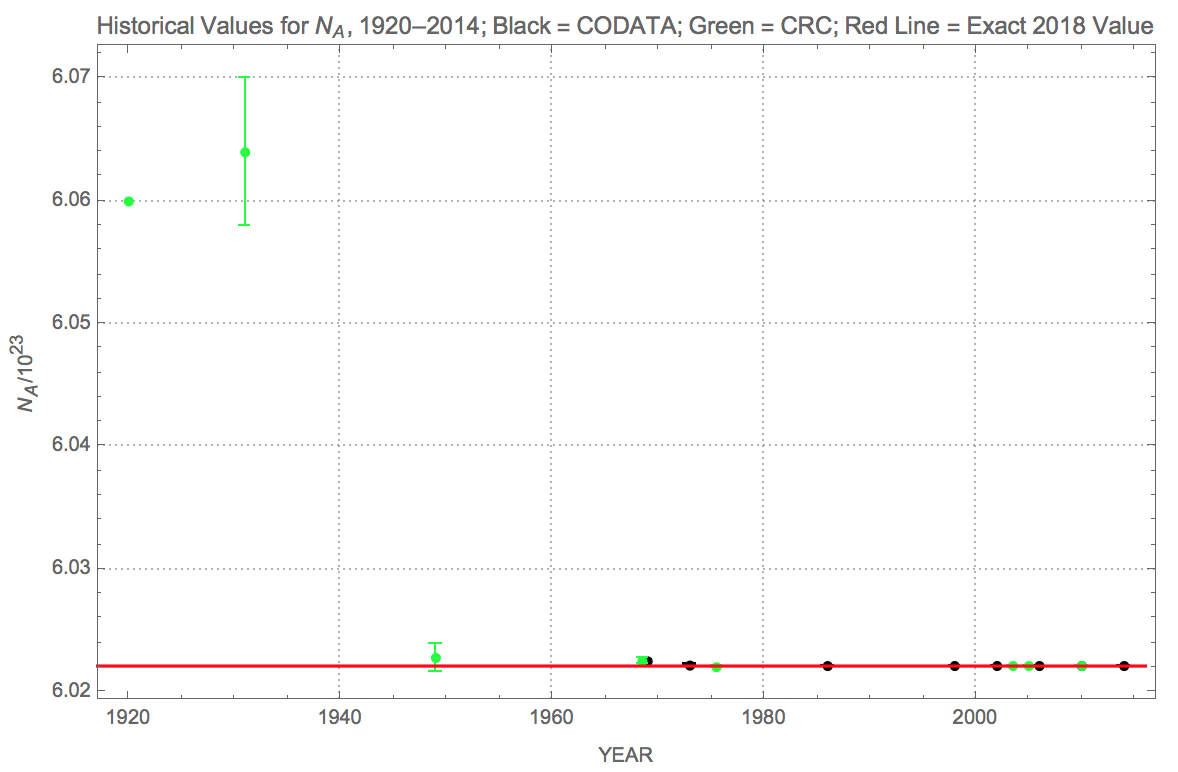 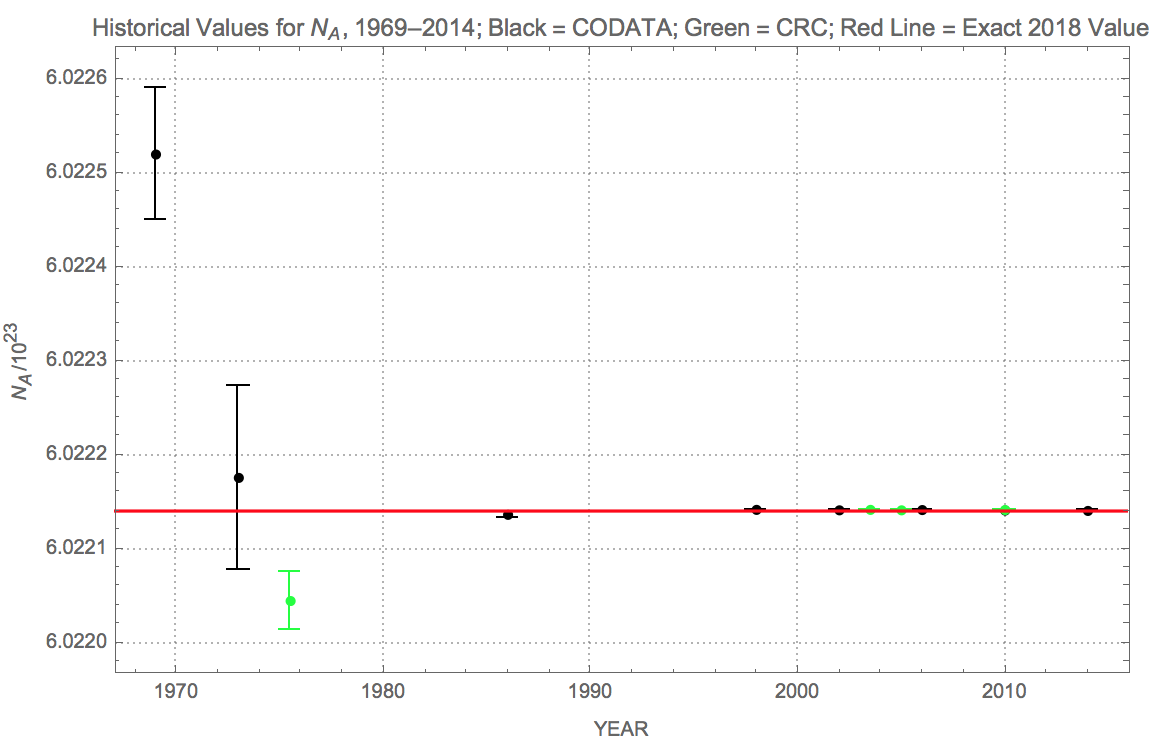 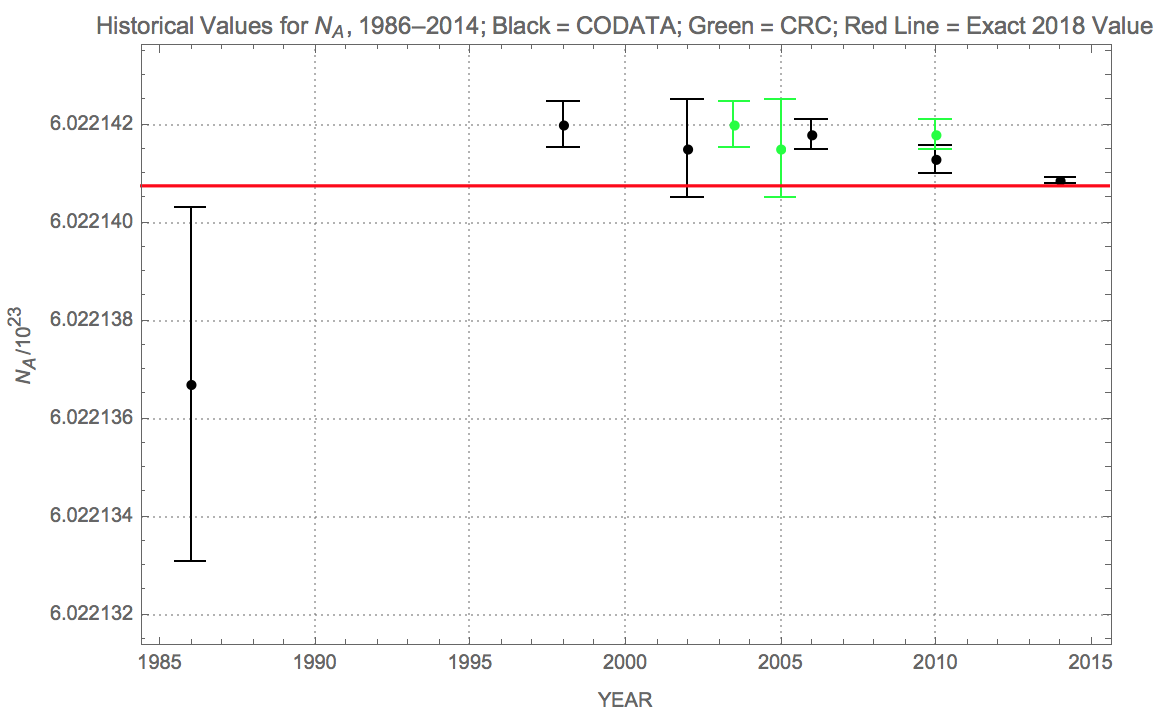 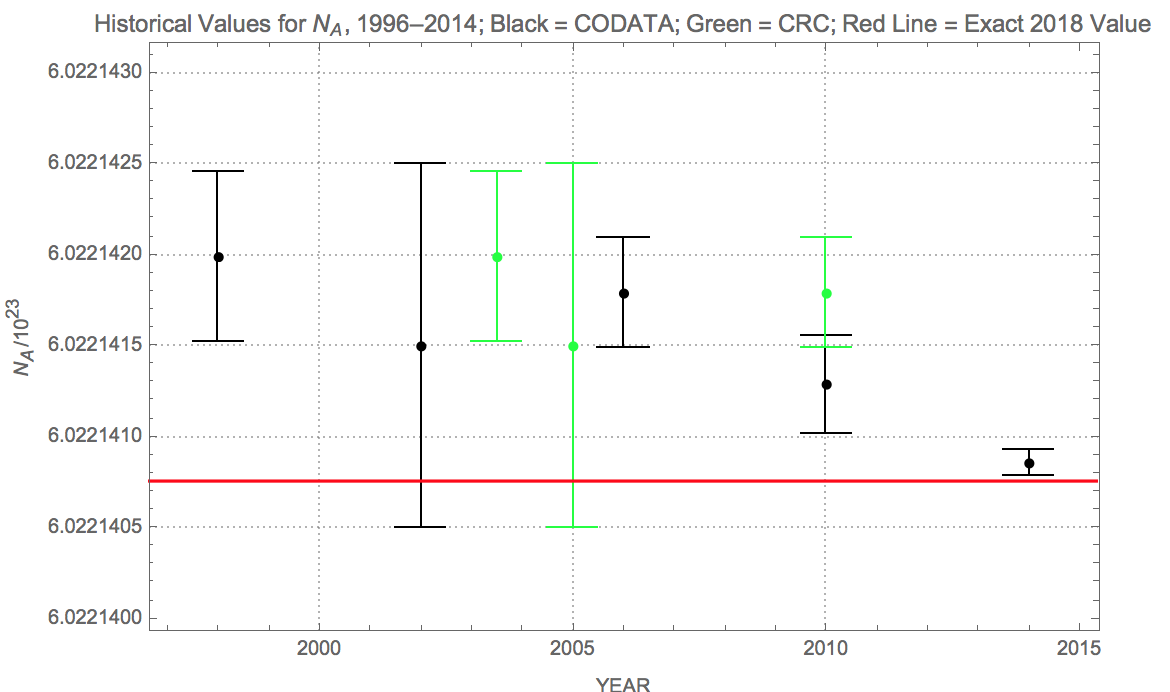 3
What is the mathematical foundation for the probabilistic nature of chemistry?
3
Deriving the unimolecular rate constant using the RRK model
14
Conception and manufacture of the Avogadro Project's (nearly) perfect silicon sphere (and, what is “atomic feeling”?)