Phase rule for a pure substance in vapor-liquid region

I'm confused with how the Gibbs Phase Rule works for pure substances in liquid-vapor mixtures. According to the phase rule, there should only be one degree of freedom for a two-phase mixture with a pure substance. For example, if we pick a temperature for two phases to exist, there will only be one pressure that satisfies this condition. But how is the amount of vapor in the mixture, defined?

Looking at the figure below, it appears as if the pressure and specific volume are both independent of the two-phase region. Does this contradict the phase rule? If I wanted to obtain a vessel containing a mixture of water with 50% vapor and 50% liquid, could it be done by changing the pressure and temperature alone? 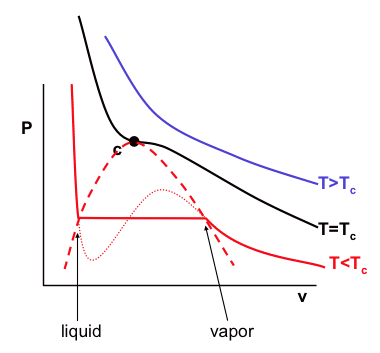 Note that the phase rule is qualitative. It says nothing about the particular amounts. It simply enumerates the theoretical number of independent parameters needed to determine amounts and compositions for the given number of components and phases.

The definition of a system, like total amounts of components, does not count among degrees of freedom.

The number of degrees of freedom of a system is the number of independent parameters, that are needed for the given system to determine its state.

For the given container volume and the substance amount, a given temperature determines the equilibrium pressure and vice versa. So there is 1 degree of freedom.

Amounts of particular phases are determined by the temperature as the single degree of freedom.

Not the answer you're looking for? Browse other questions tagged physical-chemistry phase vapor-pressure or ask your own question.

5
Lennard Jones liquid vapor phase transition
4
Liquid-Liquid phase separation
3
At the freezing point, why is the vapor pressure of the liquid phase equal to the vapor pressure of the solid phase?
1
What are the degrees of freedom (from Gibbs phase rule) for an azeotropic mixture?
1
Why are temperature and pressure represented as the number 2 in Gibbs' Phase Rule?
5
carbon dioxide in liquid and gaseous phase with liquid water
13
Why does ordinary water have a triple point?
4
How is a phase equilibrium defined for a one-component system?
4
What does the phase diagram mean by “liquid” at NTP? (The liquid and vapor coexist even when the situation is not on the curve)