How to explain regioselectivity in nucleophilic aromatic substitution

I’m trying to rationalise the major regioisomeric product of the following reaction of an arylchloride in the presence of sodium amide:

I have predicted that the para-substituted product is formed as the major product because the negative charge in the meta position in the carbanion intermediate is more strongly stabilised by the electron-withdrawing CO2NMe2 group: 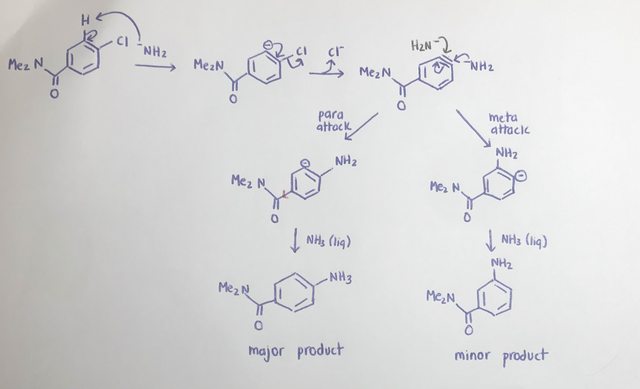 Is this observation based on inductive effects correct? Can the carbanion be stabilised mesomerically by delocalizing the negative charge through the π-bond framework?

In the benzyne mechanism, mesomeric effects are not involved as when protons are removed, the electrons are situated in orbitals perpendicular to the pi-system, in non-bonding orbitals (which makes sense since the electrons come from a sigma bond). Therefore the electrons left over are not delocalised, which is why such a strong base is required. This also means regioselectivity is explained by inductive effect, which acts through the sigma bonds. The amide is not involved in any -M stabilisation in this case.

In the first part of the mechanism, the most acidic proton is abstracted, which will be either of the identical protons either side of the Cl, as this provides the most stabilisation by inductive effect. This is correctly shown in your diagram. Deprotonation at the carbons adjacent to the amide is less favourable and leads to no reaction due to lack of leaving group anyway.

The point where the alkyne is attacked is determined by both inductive and steric effects; and optimisation of both simultaneously usually occurs in this mechanism. What I mean by this is that in the major product above, the negative charge is situated as close to two -I substituents as possible, so is stabilised, and at the same time the added NH2 is furthest from the other substituent, reducing steric strain.

In the minor product, the negative charge has less -I stabilisation, and more steric strain since the substituents are now closer together.

Of course this only applies if it progresses through the benzyne mechanism. As @Waylander hinted at, a likely possibility is aromatic nucleophilic addition-elimination since you have an electron withdrawing substituent para to the leaving group. This just so happens to give a product identical to the major product of the benzyne route.

Not the answer you're looking for? Browse other questions tagged organic-chemistry aromatic-compounds nucleophilic-substitution regioselectivity inductive-effect or ask your own question.

24
Electrophilic Aromatic Substitution: Are protonated OH-groups ortho-/para- or meta-directing?
0
Basicities of meta-nitrophenoxide and para-nitrophenoxide
5
Most activated position for Electrophilic addition in substituted biphenyls
2
Electronic effects of substituents in the benzyne mechanism
2
Organic Chemistry - Effect of methyl substituent in Aromatic Substitution via Benzyne
0
Para effects on substituents in aromatic compounds