How does a Microbial Fuel Cell work?

I am doing a science fair experiment about Microbial Fuel Cells and was wondering how exactly do they work?

I know the basics, that they work similarly to a normal Fuel Cell through oxidation and reduction but am still a little unclear on the full details.

A microbial fuel cell (MFC) is an electrochemical cell that converts chemical into electrical energy, and in which one redox half-reaction is catalyzed by enzymes of microorganisms. The fuel cell consists of anode and cathode compartments which are separated by a membrane that is only permeable for specific cations. At the anode, bioorganic fuel is oxidized to $\ce{CO2}$ and $\ce{H3O+}$. The gained electrons flow from the anode through an external electrical circuit to the cathode, where they are consumed together with protons by the reduction of $\ce{O2}$ to $\ce{H2O}$. The $\ce{H3O+}$ ions are transferred from the anode to the cathode compartment through the membrane.

The fuel is a medium rich in nutrients which can be oxidatively degraded by the microbes, like, for example, sugars (in the following formula, $\ce{C12H22O11}$ stands for a variety of disaccharides):

The scheme below (image source: MFCGuy2010/Wikimedia Commons) shows a MFC which uses soil as biofuel. Nutrients from the soil, like acetic acid, are oxidized by microbes in the anodic biofilm to $\ce{CO2}$ and $\ce{H3O+}$. Protons are then consumed in the reduction of supplied oxygen at the cathode, and electrons flow through the external circuit from anode to cathode. In this case, the soil acts simultaneously as nutrient medium and proton exchange membrane. 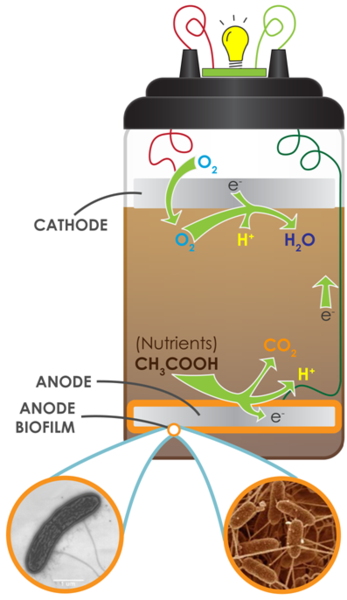 24
How does oobleck work?
3
Would this recipe on stink bomb work?
10
How do erasable pens work?
5
How does potassium nitrate work as an oxidiser?
8
Best Fuel for Potato Gun
11
How does the "kreosan" Coca-Cola rocket work?
4
Cheap metal to replace platinum in hydrogen fuel cell
4
Colored Flames Experiment