Are the protons in methylene groups of achiral molecules such as propane-1,2,3-triol or 3-hydroxypentanedioic acid diastereotopic?

Consider propane-1,2,3-triol. To me, replacing one of the protons in either -CH2 with an arbitrary X nuclei creates (what I work out as) 2 diastereomers. However, NMR simulations of propane-1,2,3-triol in ChemDraw and on nmrdb.org (https://www.nmrdb.org/new_predictor/) do not flag these hyrdogens as diastereotopic and neither does this "Diastereotopic atoms" computational tool (http://www.cheminfo.org/Spectra/NMR/Tools/Diastereotopic_atoms/index.html). I have also played around with physical models of each isomer and cannot find a plane of symmetry to make them enantiomers.

Well, I can't speak to your NMR simulator and computational tools but from my perspective, and that of ChemDraw, the hydrogens at C1, and C3, in diol 1 are diastereotopic. While diol 1 is meso and achiral, introduction of deuterium in 2a renders both C1 and C2 stereogenic. Consequently, 2a is a diastereomer of 2b where the deuterium has been moved to the geminal C1 position. You may want to look at this.
<b

You are correct, and these protons are indeed diastereotopic: see Magnetic non-equivalence of acetal protons for a similar example. These type of protons often catch people out, so it's good that you spotted it!

As for what you're "missing", it's simply that some of these tools are not particularly advanced. I don't know about the others, but ChemDraw's NMR prediction only uses a limited set of heuristics to predict chemical shifts, and in more complex cases these heuristics won't suffice. I highly doubt that any of them use symmetry information to determine which protons are equivalent.

For another example of ChemDraw NMR prediction fail, see: 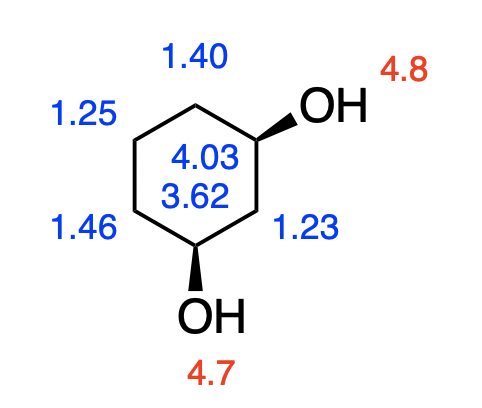 Not the answer you're looking for? Browse other questions tagged stereochemistry nmr-spectroscopy or ask your own question.

3
Why do the two methylene protons in ethylbenzene have a chemical shift at 2-2.9?
5
Are the hydrogen atoms of 2-methylindane homotopic, enantiotopic, diastereotopic or unrelated?
2
Why are the ethyl ester methylene protons not diastereotopic in ethyl (+-)-2-methylbutyrate?
7
Achiral universe - asymmetric synthesis
3
How to differentiate diastereotopic protons by NMR in flexible groups?
1
How are these molecules chiral and achiral?
3
Magnetic non-equivalence of acetal protons
2
H-NMR Equivalent Protons and Coupling of Glycerol
1
Are all alkene geometrical isomers achiral?
0
Protons on aromatic rings in NMR