This is a semiconductor-related question, but in order to understand the acceptor level energy state of boron in bilicon, I figured I'd ask here for hints.

Boron is a p-type material when introduced in a semiconductor like silicon. Boron forms three covalent bonds with silicon, leaving one silicon atom frustrated, not forming a bond. This doping process introduces the idea of the hole, that is, absence of electron.

However, my chemistry knowledge is limited, and I don’t understand what kind of bond exists when an adjacent silicon valence electron jumps in this electron vacancy. Is this new electron now shared by both silicon and boron, or does it belong to silicon, since silicon complies to the octet rule, whereas boron does not?

Why does the acceptor level reside above the silicon valence band edge and what does this level exactly represent? Does it represent the energy needed for an adjacent silicon valence electron to jump into this vacancy? 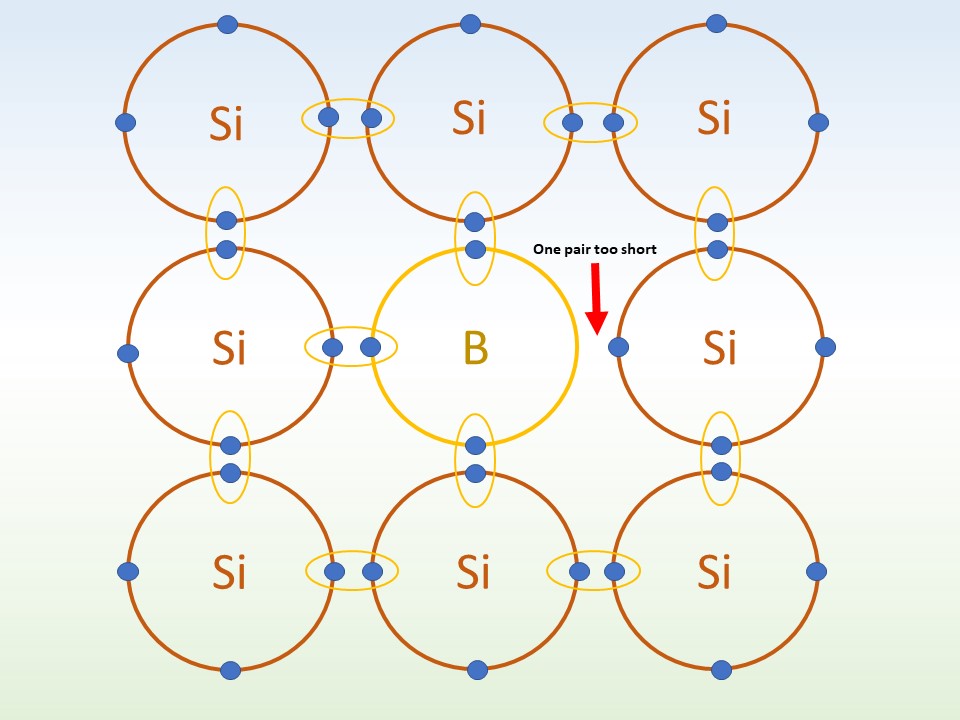 Using your diagram, the boron-silicon bond with only the silicon electron has only half of the possible electron content. A "hole" as you said. The hole is not confined to the one $\ce{B-Si}$ bond, but can be in any of the 4 positions. It's not like the boron sits there and the silicon pops its electron into the potential bond; the bond is there and it's only half filled.

Now this isn't a molecule, but you can focus on the boron part of the crystal and say that all four adjacent silicons are bonded to the boron, but you have only 7 electrons where the "molecular" orbitals could contain 8.

Electrons don't really "belong" to one atom or another; they comprise some sort of sea of electrons, and the sea above this boron is a little lower than elsewhere. I think of the sea of electrons in a copper-boron alloy as being very fluid, and having a level surface everywhere, but the sea in a p-type semiconductor is more like mud (quicksand?) and can have some dips that could catch and puddle some water (~electrons). The sea is still controlled mostly by the silicon, just modified by boron (submerged holes).

The band gap in semiconductors is described in terms of levels. https://en.wikipedia.org/wiki/Band_gap however, levels don't have energy, electrons have energy. The levels are what we think we put them in to indicate their energy.

The picture shows the transition from atomic orbitals (on the right), which is what the OP shows in the diagram in the question, to a continuity of structure and a broadening of energy levels (on the left). Drawing individual atoms keeps us at the right end of the picture, whereas discussing semiconductors moves us to the left side of the picture. Holding those two sides of the picture (and the middle, too, which represents metallic conduction) in your mind at the same time is somewhat like wave-particle duality.

So, in answer to the comment on my first answer, the electron in the $B-Si$ bond is lower than the top of the valence band, but the second electron in the bond is more energetic than the top of the $Si-Si$ valence band, and may go into the conduction band, or more easily be excited into it. The levels don't conduct electricity, the electrons (or holes) do.

Not the answer you're looking for? Browse other questions tagged inorganic-chemistry bond solid-state-chemistry semiconductors or ask your own question.

6
Covalent Bond/Hydrogen Bond
3
Why is silicon oxide giant covalent structure?
4
Why does phosphorus give a free electron in silicon doping?
1
Covalent vs Ionic bond in Silicon dioxide
4
Is carbon–sodium bond mainly ionic or covalent?
4
Does boron form compounds without covalent bonds?