How can I know which molecule is more stable when bond order it's equal?

When I try to find their bond order and their magnetic nature I get this:

To recognize the more stable molecule you may extend the description with bond orders is the one considering how the mathematical concept to mix atomic orbitals by LCAO and visualizing the results in Molecular orbital diagrams and compute the overall energy of such a molecule. Eventually, you compare the total energy of $\ce{O^-_2}$ with $\ce{C^+_2}$ using the same external reference.

As about the hydrogen molecule shown below: 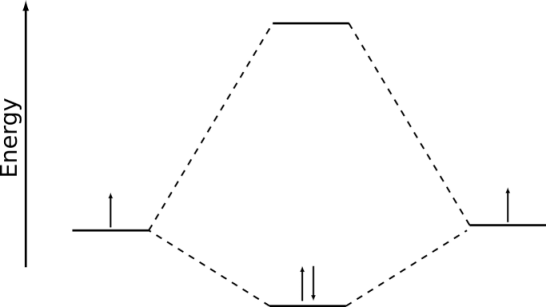 Two important details about symmetric diatomic moleculs to retain are:

So you draw the diagram including the energetic levels, and populate the levels with electrons from the bottom up. If there multiple molecular orbitals of same energy, you fill the orbitals first with one, and later with the second electron. You then compute the the overall energy of the molecule and later compare the results about the molecules in question against a reference in common, e.g. vacuum.

Note that the notation $\sigma$ and $\sigma{}^*$ is about the rotation symmetry around the bond between the molecule (contrasting to $\pi$ and $\pi{}^*$ as perpendicular to this), and not if the molecular orbital in question is conceptually formed from $s$, or $p$ atomic orbitals. Equally, the energetic consecution of levels of the molecular orbitals may change, e.g. between nitrogen and oxygen:

Not the answer you're looking for? Browse other questions tagged bond molecular-orbital-theory stability covalent-compounds or ask your own question.

9
Are molecules with bond orders less than one stable?
10
Why is the eclipsed conformer more stable than the bisected conformer in 1-butene?
5
Stability of cyclic radicals
26
Which molecule is more acidic: CHF3 or CHBr3?
4
Ionization energy of C2-, C2, and C2+
1
Order of rate of acid catalysed dehydration of alcohols