Why is a ketone more nucleophilic than an ester?

I guess the ester is a weaker nucleophile because it does have an additional oxygen atom, unlike the ketone, that is pulling electrons from the C-O double bond towards the carbon atom (this happens vice versa too of course with the ester oxygen). This lowers the ionic character of the C-O double bond (smaller $\delta^{+}$ and $\delta^{-}$ charge on the carbon and oxygen atoms) and thus increases the energy of the C-O $\pi^{*}$ bond, making it less nucleophilic. Is this correct?

I like Martin's posts, they make me think - and that is always a good thing. Here is where my thinking has taken me:

Looking at the partial charges of esters and ketones, unfortunately ron's answer is only half true. For a simple model I have chosen 3-pentanone and ethyl acetate. You can see, that the carbonyl carbon in the ketone has a smaller positive charge ($q=0.6$) than in the ester ($q=0.8$), so the latter should be more prone to nucleophilic attacks.

This is not the case and the explanation lies within the molecular orbitals. The LUMO of the ketone has a slightly lower ($-1.57~\mathrm{eV}$) energy than that of the ester ($-0.87~\mathrm{eV}$). More important, the coefficient in this orbital is larger at the carbonyl carbon in the ketone compared to the ester. And this orbital will be attacked by the nucleophile, which usually has a high lying HOMO. So the LUMO of the ketone will be more accessible compared to the ester (smaller energy difference).

Another important fact is, that the ester is much more rigid than the ketone as it has one low lying MO that spans the $\ce{O=C-O}$ moiety (MO20), which is obviously not present (as it cannot be) in the ketone (MO18). You can also see, that the $\pi$ contribution of carbon in the ketone is lower. 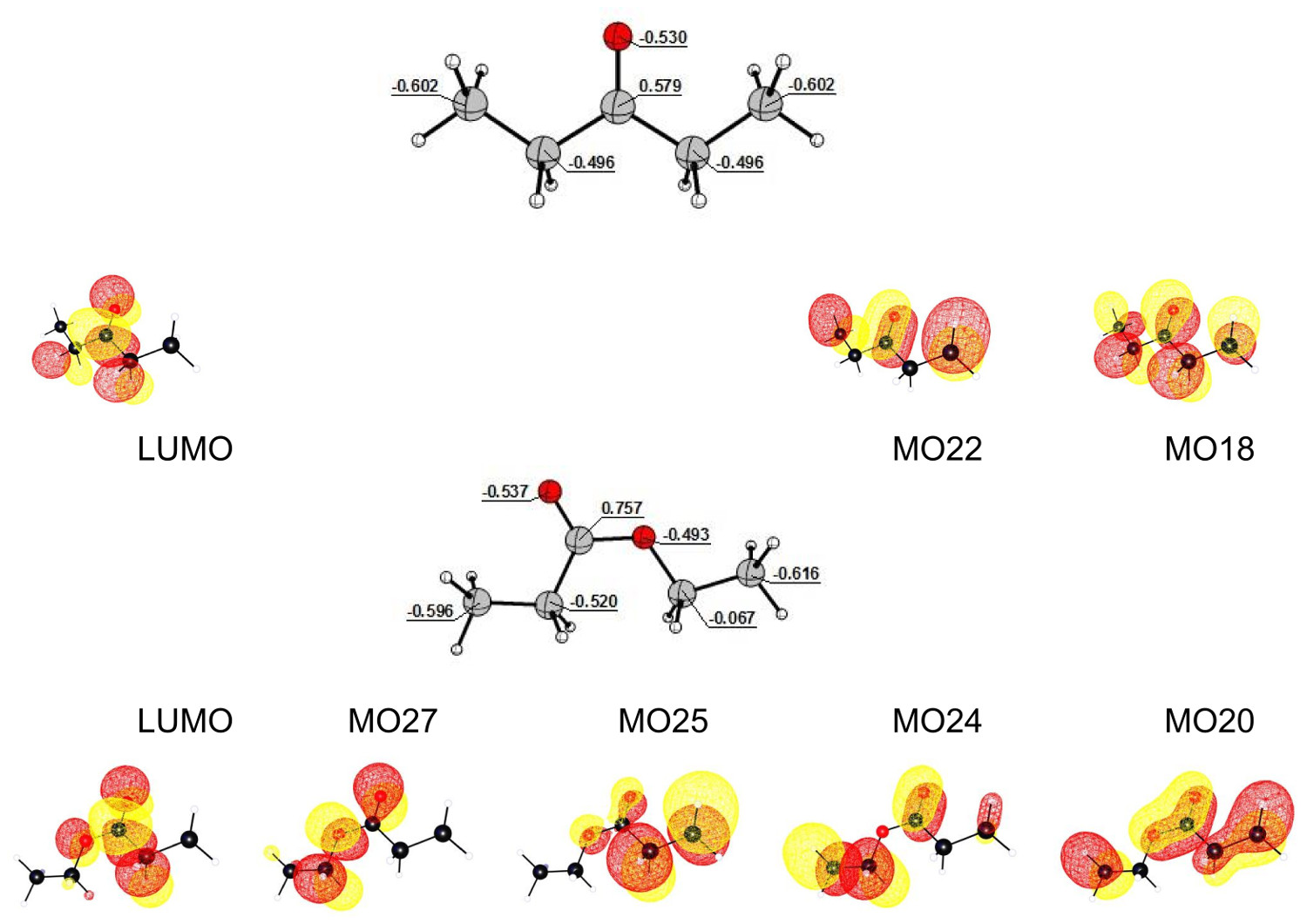 Not the answer you're looking for? Browse other questions tagged organic-chemistry carbonyl-compounds reactivity or ask your own question.

26
Rationalising the order of reactivity of carbonyl compounds towards nucleophiles