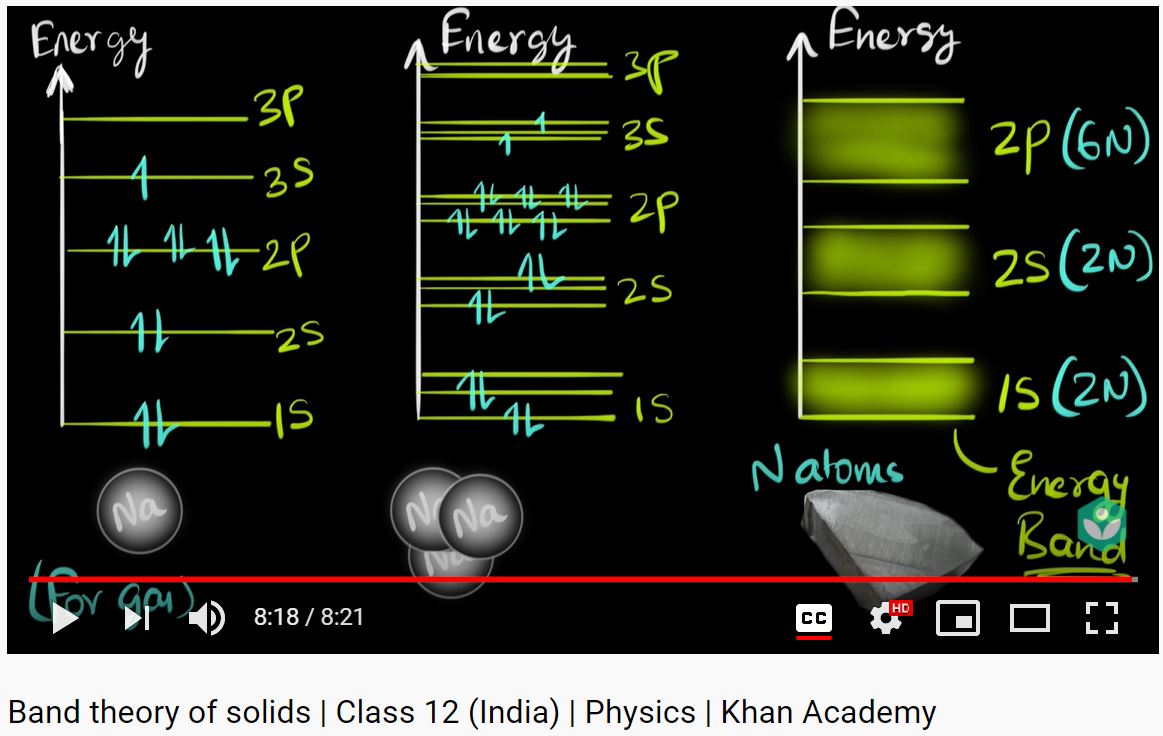 In solid, energy bands means the 1s orbital with spin up and down become 3 states when there are 3 atoms.

But then. If you look at hydrogen atoms, the allowed bound states have energies equal to En=Ry/(n2) and n is the main quantum number ranging from 1 to infinity. In other words, there is an infinite number of available electronic states in a single hydrogen atom.

When we talk about energy bands. Which of the above is usually referred to? The few states orbitals or the almost infinite allowed bound states?

For the latter, how do you characterize the energy bands in liquid like water? What kind of bands are formed in such cases?

When we talk about energy bands, we are talking about mixing of orbitals on different atoms (AOs) with similar energies. First, assume simple models. In the solid, the structure is very regular and all atoms have AOs with identical matching energies. This makes the number of orbitals available for mixing in solids very large, and mixing results in bands. In a liquid, on the other hand, structure is highly irregular. Orbitals on different atoms often have energy or overlap mismatches, but occassionally match and mix, and this results in much local mixing (say due to hydrogen bonding) but not extended delocalized orbitals. Because of energy mismatch you can also end up with bands in liquids but their origin (in this model) is different than in solids.

Energy levels of individual molecules in liquid water are "perturbed" by neighboring molecules. These perturbations are small compared to the ionization energy of the valence electrons. The stability conferred by an H-bond in water is in the order of 20 kJ/mol. Compare that to the ionization energy, ~1200 kJ/mol. Therefore electrons remain bound to local waters even as their energies are slightly perturbed by interactions with other molecules. H-bonds do contain covalent character, that is, involve sharing of electrons between two molecules (specifically between H-bond donor and acceptor atoms). However this does not imply electrons in liquid water are extensively delocalized beyond local bonds, certainly not on the spatial scale possible in solids.

As a note of interest ice under pressure exhibits metallic phases.

Note perturbations due to the solvent are evident in the difference between vibrational spectra obtained in different phases.

6
If vibrational modes are quantised, why is infrared spectroscopy smooth looking?

3
Model of an ideal liquid in chemistry
19
What is the least dense liquid under normal conditions?
0
Low viscosity, low surface tension liquid for volume measurement