How to read mutual solubility curves of salts with a common ion?

Came across a few graphs that represent the mutual solubility of two compounds in a solvent, for e.g., solubility of $\ce{KCl}$, and $\ce{NaCl}$ in $\ce{H2O}$.

I just wanted to understand how to read these type of graphs: 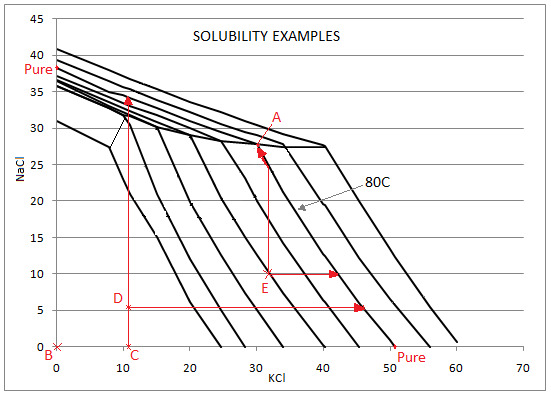 The graph doesn't appear complete, or is at least missing additional info to make sense of it. I want to know what that info is.

If you start at $x$-axis with the $\ce{KCl}$ solution, you can dissolve $\ce{NaCl}$, climbing upwards until you reach the curve for the given temperature. If you cross it, some $\ce{NaCl}$ will not dissolve, and some $\ce{KCl}$ may precipitate, because of the common ion effect.

The same of the initial $\ce{NaCl}$ solution, starting on $y$-axis, and dissolving $\ce{KCl}$, going to the right, again until you reach or cross the curve.

Problem is difficulty with both measuring and predicting ion activities or activity coefficients for concentrated ionic solution. Replacing activities with concentrations could be done only with lot of grains of salt and both eyes closed tightly.

I do not have clear interpretation of the about horizontal edge in the upper chart part. It looks like a kind of "precipitation eutecticum", an analogue to a binary mixture phase chart.

If the system is at the cross-saturation curve, and there is excess of one solid salt, then due dynamic nature of processes, this salt dissolves and the other precipitates. The system is moving slightly along the curve, until for each of salts the rates of dissolving and precipitating are equal. This process is slow.

If a cross-saturated solution cools down, both salts precipitate, according to the ratio of kinetic rates of both processes, until the curve for new temperature is reached.

The ratio can be only very roughly estimated from

Not the answer you're looking for? Browse other questions tagged water solubility recrystallization salt alkali-metals or ask your own question.

-1
Mutual saturation of salts/common ion effect: How to interpret the given diagrams