Why doesn't the viscosity of water change much with temperature like it does for other substances?

I would like to know why water doesn't ever become like syrup before it freezes when many other liquids, such as hydrocarbons, seem to have a more gradual change from becoming more viscous and then turning solid.

As I understand it, the more viscous a material is, the stronger the inter-molecular forces are. When the liquid is heated up, the molecules have more kinetic energy and so they can more easily break free of these forces--the liquid will become less viscous.

Why doesn't water have the same spectrum of viscosity as other materials? It seems like it is either solid, or it has very low viscosity.

This is something I spent a lot of time thinking about during my PhD, so let me see if I can explain it.

What you are talking about is the relationship between macroscopically observable properties (like viscosity), the relaxation time spectrum (which is a way of looking at the time scales involved in molecular movements), and the structure of the molecules themselves. It's kind of complicated, but I think I can explain it in way that will make sense.

You know that as we increase the temperature, molecules have more kinetic energy and can more easily break free of the forces holding them together. I have some other answers here and here that explain this in more detail. With something like viscosity, however, there is more to the picture.

The first thing you need to know is:

Viscosity is a measure of momentum transfer in a fluid

In other words, it is a way of quantifying the effect that movement in one part of a fluid has on the parts immediately adjacent to it. If the movements are highly coupled (meaning that if one layer moves, the layers next to it move almost as much), the viscosity is high. If not, the viscosity is low. Wikipedia has a pretty good explanation of this on the macroscopic scale.

So what causes a fluid to have a viscosity? Since you know about intermolecular attractive forces, this is an obvious candidate. And indeed, the stronger the intermolecular forces are in a fluid, the higher the viscosity tends to be. However, there is another factor involved - intermolecular repulsive forces (sometimes called steric effects or excluded volume interactions). The idea is that if one molecule wants to move in a dense fluid, the other molecules have to get out of the way first. 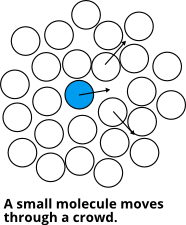 As an analogy, imagine moving through the crowd at a packed concert or club. In order for you to move, someone else needs to move, and for them to move, someone else has to move, and so on. You can be polite and wait patiently for them to move, and eventually someone will. Or you could be assertive and ask, and move faster. If you are really impatient, you could barrel through people, knocking them out of the way (and hope you don't get beat up). Your impatience in a crowd is analogous to shear stress in a fluid. At lower temperatures, the molecules are closer together (since their kinetic energy isn't high enough to move very far out of the potential energy wells of their neighbors), and they move more slowly in general. This means that the time it takes for neighbors to move goes up, and as a result, viscosity goes up too - if you force them to move, they will knock others out of the way, transferring momentum through the fluid. At higher temperatures molecules move much more frequently, and so it is relatively easy to "drag" some through the fluid - they don't have to knock other molecules out of the way, because by the time they get there, they have moved on their own. The viscosity is lower.

Now, for simple molecules, the line between "can't move" and "moves easily" is pretty distinct. Once the molecules are mobile enough that excluded volume interactions are overcome, the material melts, and further changes to viscosity are small and mostly due to intermolecular attractive forces. For example, here is a plot of the viscosity of water vs. temperature 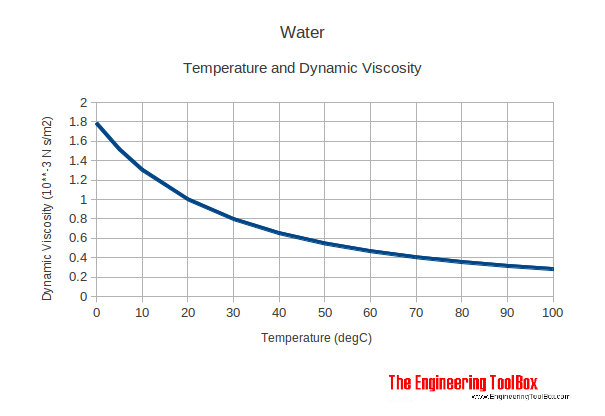 As you can see, it decreases smoothly as temperature increases. Below the freezing point, the viscosity is harder to define (although large masses of ice do flow), but the curve is discontinuous and it "jumps up" to some higher value.

But what about complex molecules? Let's link the monomers together: 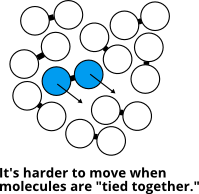 Now it becomes much harder for the molecules to move. At a given temperature, you have to wait about the same amount of time for a single monomer to move, but it takes much longer for a pair to move together. Going back to the crowded room analogy - imagine trying to move through a crowd in which everybody - including you - was handcuffed in pairs to someone else. It would be a lot more difficult! In general, it turns out that the relaxation time for linear polymers increases as (approximately) the square of the chain length (for short lengths below the entanglement length). This means that if you double the number of monomers in a polymer chain, the average time it takes for them to move out of the way goes up 4 times. This is true up to a certain length of chain called the entanglement length (which depends on the polymer), at which point the likelihood of coordinated movement of the whole chain becomes so low that each polymer is sort of "trapped" in a tube made of other polymers. The analogy often used to explain this is a nest of snakes - they have to slither around each other. As a result, this type of motion was named reptation - after reptiles.

The interesting thing is that for shorter lengths (below the entanglement length) each length scale of the chain moves essentially independently of the rest. This means that in a longer chain, on short time scales the shorter lengths act as though they were in a low-viscosity fluid - they move easily and motion is not correlated with their neighbors. For longer length scales, the chain is essentially "frozen" - it can't move until its neighbors move - and so it acts more like a solid. 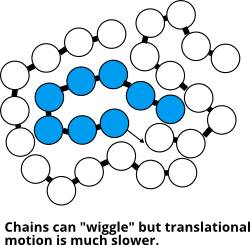 The result is that short lengths of chain can "wiggle" on short time scales, but longer lengths move more slowly. This gives us a relaxation time spectrum - it means that if you apply very fast changes (high shear rates) the molecules don't have time to get out of the way, and so the viscosity is high. If you increase the temperature, things move faster, and so at the same shear rate, the viscosity will be lower (more of the chain can move out of the way). The same is true at lower shear rates for the same temperature - the shorter length scales can move out of the way, and so it becomes more liquid - the viscosity decreases. On the longest time scales (lowest shear rates, coldest temperatures) the entire length of the chain can move, and so you see the lowest viscosity.

This is called shear-thickening, and is commonly seen in linear polymer melts or concentrated solutions. It is an example of viscoelastic behavior, which means that depending on the conditions (temperature or time scale of interaction) the material will exhibit a range of liquid-like (viscous) or solid-like (elastic) behavior. An example commonly used to demonstrate this is silly putty (although silly putty is not a pure linear polymer.) On short time scales, the polymers don't have time to relax completely and so it behaves like an elastic solid. This is why you can bounce a ball of silly putty on a table. At longer time scales, the polymers can fully relax, and so the silly putty flows. This is why if you let a lump of it sit out for a while, it will form a puddle. Silly putty is unique in that the relaxation time spectrum ranges from elastic to viscous over time scales that are commonly observed at room temperature, so you can see these effects in high contrast very easily.

There are many other types of non-Newtonian behavior (which just means viscosity is not constant), but they are all fundamentally connected to the relaxation time spectrum of the fluid, which is directly related to the molecular structure.

4
Are there any STP liquids not containing large amounts of hydrogen and oxygen that are safe for human contact?
6
What structural property creates stickiness?
9
Why is mercury's surface tension so high, when its viscosity is low?
2
London/dispersion forces
5
Looking for a non-volatile liquid less viscous than water
7
Why does the viscosity of honey decrease when mixed with other viscous fluids?
5
higher viscosity base oil instead of better lubrication results in worse