How does X-Ray Crystallography determine the components (as opposed to the structure) of a molecule?

Thanks for some online resources (i.e. here) I have an understanding of what X-Ray Crystallography does.

By blasting X-Rays at a crystal and recording the scattering patterns on a plate behind the crystal, it becomes possible to determine the shape of the molecule in the crystal.

Where I'm confused though is in diagrams of protein molecules mapped out by x-ray crystallography, scientists are, incredibly, able to map out extremely complex structures. But what I don't understand is, how are they able to determine which atoms, or other molecules, they are seeing in the structure?

How do they know which part of the structure is which amino acid? Which part is hydrogen? Which part is nitrogen? Etc. I don't see any way of determining this from a diffraction pattern on a plate. 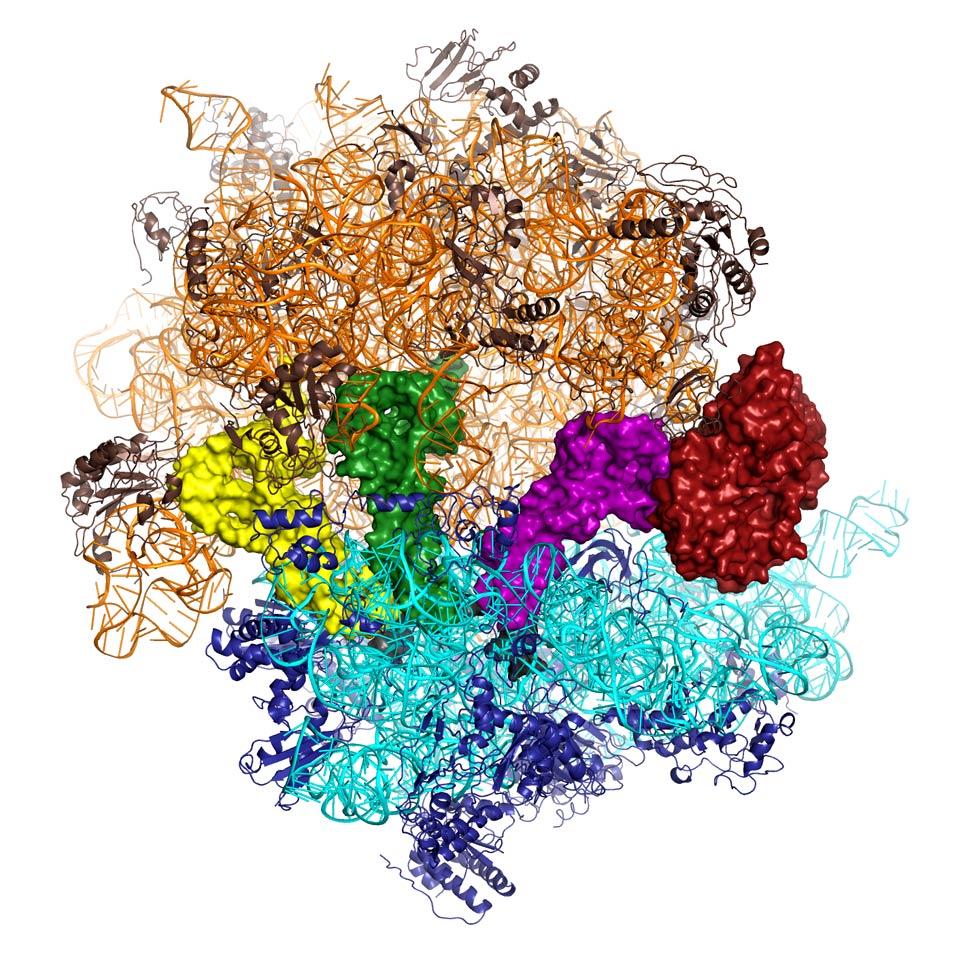 That is because the solution to the structure isn't done just via the plate. The signal you see on the plate is what is called "structure factors" of the experiment. They are associated with the fourier transform of the electron density. There are computational ways of obtaining the electron densiy once you have the structure factors. When you do that, you arrive at something like this: 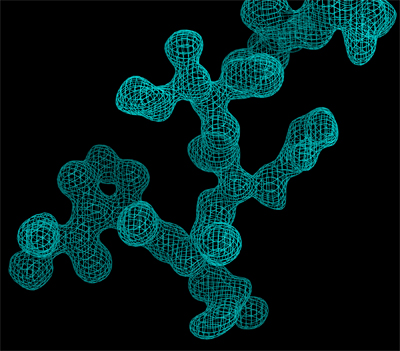 Then, once you have something like that, at least for proteins, you need to find the best possible geometry that fits the density field. So if you succeed you might end up with something like this: 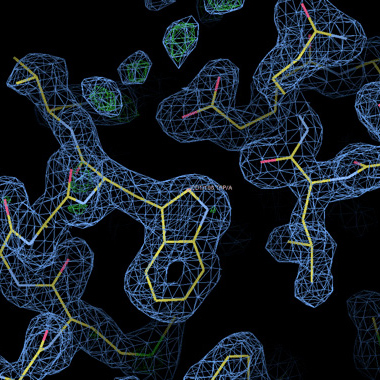 The trick here is that the molecular biologists and physicists who work with proteins already know something of what they are looking for. They don't try to fit a haphazard collection of atoms to the electron density map, they start with a polypeptide chain, often one for which the sequence has already been experimentally determined so they know a lot about the composition of the molecule well before any structure resolution takes place.

This is the tl;dr version of the thing. In reality there are a number of things I have omitted. For instance, it isn't always necessary to obtain the electron density in order to resolve the structure. There are ways to theoretically compute the structure factors from a test geometry such that a structure is considered resolved if the theoretical and the actual form factors coincide up to a certain tolerance.

The structure is also resolved in steps. Often when you crystallize something, a lot of elluents and additives are added to the mix in order to make the crystallization possible, particularly for proteins, which have very fragile and sensitive crystallization behaviors. So researchers first try to resolve the geometry of the main protein chain, after that is done there will be residuals which can be adjusted by trying to find molecules of the additives and elluents in the unit cell. That is how we end up with sulfates, waters and other small molecules and analytes floating amidst the protein structure for the majority of the PDB structures resolved via X-Ray crystallography.

That said, for very small molecules and an electron density with a very high resolution, it is possible to distinguish one atom from the other by the shell structure around them. But, again, composition is often an information that the researcher has a priori, not something the diffraction is expected to provide.

P.S. If you have time, you can check the Yale Course of Professor McBride Freshman Organic Chemistry I. It is totally free an in the internet. In it, he does a very pedagogical and awe-inspiring introduction to the ins and outs of X-Ray diffraction (and other experimental techniques) that go well beyond the scope of this answer. He does not focus on proteins, but on the basics, small organic molecules, but it does wonders to clear the fog. The strictly relevant classes are classes 5 and 6, but I desperately urge you to go through everything that came before instead of just jumping in.

Not the answer you're looking for? Browse other questions tagged molecular-structure proteins x-ray-diffraction or ask your own question.

0
What do X-ray diffraction and NMR tell about the Proteins?

3
Elastic scattering of x rays in 3D: the principle for XRD analysis
18
(Computationally) finding similarity between two organic compounds
9
What is the quantum mechanical explanation of X-ray diffraction?
2
How can I solve a non-cubic crystal structure?
16
Why is crystallography still used in some cases for small molecule structure determination?
4
Berry Pseudorotation
14
How were x-ray diffraction patterns deciphered before computers?
5
How is bond angle of a molecule measured?
2
Determination of metal state from protein X-ray structure