1) Which Lewis structure is preferential of the two below? EN considerations suggest the first structure. Size/charge density suggests the second one; the second structure would likely be more stable because if we think of the halide series of binary acids - the bromide anion is more stable than the chloride anion - and hence hydrobromic acid is a stronger acid than hydrochloric acid - the sheer size of the bromide ion is able to effectively dilute its charge and overcome its lack in electronegativity. 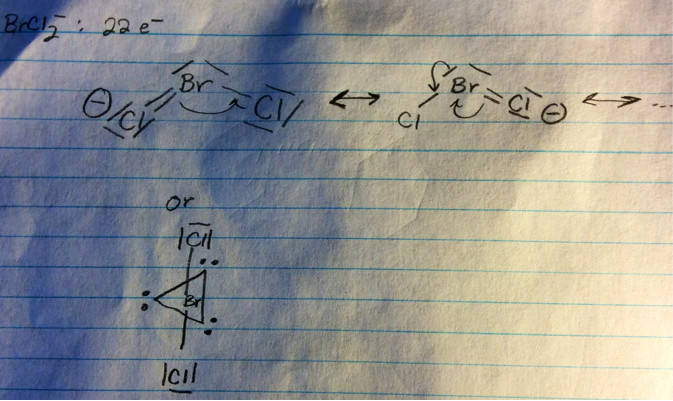 2) I am told that peripheral atoms should have octets. Why is this so? What is the physical reasoning behind this? Does this have anything to do with minimizing the overall potential energy of the molecule - i.e. the peripheral atoms are perhaps more subject to attack than internal atoms (due to steric factors) - so molecules try to minimize such a possibility by completing the octet for peripheral atoms? On the other hand, the octet rule is more of a guideline rather than a rule.

3) What is the bond-angle of the Cl-Br-Cl bond? I am told that the bond angle is a perfect 180 degrees. What about the first structure? If we consider the first structure a resonance contributor, wouldn't that lead to a distorted/non-linear bond angle? Or would that still lead to a perfect 180 degree bond angle, because to me, it seems that all the lone pairs on the bromine can participate in resonance (if not all at once).

[I]nteratomic distances [...] are individually always substantially greater than for the corresponding diatomic interhalogen.

Unfortunately, the following data table does not contain an actual value for the bond length, though it does indicate that the two $\ce{Br-Cl}$ bonds are of equal length (which we probably could've safely assumed from symmetry considerations and the energetic degeneracy of the orbitals of the two chlorine atoms, if nothing else), and that the $\ce{Cl-Br-Cl}$ bond angle is (approximately) $180^{\circ}$. Bond length can often be correlated to both bond strength and bond multiplicity, especially when comparing compounds of the same atoms. Since the bonds in $\ce{BrCl2-}$ are longer than those in $\ce{BrCl}$, it's reasonable to infer that they are also weaker, and do not have greater multiplicity (i.e., there is no additional $\pi$-bonding). I would further reason that any $\pi$-orbital overlap would have to be very poor (judging by the mismatch in both size and energy of the $3p$ and $4p$ orbitals of chlorine and bromine, respectively), which makes $\pi$-bonding unlikely. (For the sake of completeness, I would note that I could be mistaken here, since $4p$ orbitals are somewhat smaller and lower in energy than expected, given the poor shielding of the nucleus by $3d$ electrons. That said, I don't think the magnitude of this effect is large enough to make a major difference here.)

A full quantitative molecular orbital theory treatment of the molecule would require computation, and I wasn't able to find many useful literature references. However, as the molecule is relatively simple, we can probably make reasonable progress with even a very naive analysis. On the valence level(s), we have a total of $22$ electrons in $12$ twelve atomic orbitals, all $s$ or $p$. These will combine to form twelve molecular orbitals, eleven of which are going to be doubly occupied. Note that for any bonding MO generated, an anti-bonding MO will also be generated. Hence, even if we had six bonding MOs (and, in reality, some would almost certainly be non-bonding), we would have five anti-bonding MOs occupied as well. This would yield an overall bond order of $1$, indicating a bond order of $\frac{1}{2}$ for each individual bond. By analogy to similar (but more common and hence extensively studied) polyhalogen anions (e.g., $\ce{I3-}$), this conclusion seems justified. $\ce{I3-}$, and numerous similar isoelectronic molecules, are often described using the three-center four-electron (3c4e) bond, and I think this model is probably applicable to $\ce{BrCl2-}$ as well.

The upshot of all this is that, while it's true that you can draw certain valid resonance contributors, they may not accurately reflect the structure and electron density of the actual molecule. The structure with the negative formal charge on the bromine is best, which agrees with your intuition regarding its size and polarizability being able to stabilize the charge. Due to the disparity in electronegativity, however, the bonds are nevertheless polarized towards the chlorine atoms, so the formal charge alone doesn't fully describe the electron density correctly.

7
Limitations of Lewis structures
1
Why does calculating formal charges help us draw correct Lewis structures?
3
Cyanide's Lewis structure - electronegativity or octet rule?
4
Is it possible to use the school supplied algorithm to build the Lewis diagram of the iodate ion?
0
Lewis dot structures of CO2
3
Rules to identify the most stable resonance structures