Beta sheets are illustrated as such in most diagrams, where:

Most explanations explain the stronger bond strength by stating the obvious from the diagram: that the "hydrogen bonds are aligned directly opposite each other, making for stronger and more stable bonds." (taken from chem libretexts, https://chem.libretexts.org/Bookshelves/Biological_Chemistry/Supplemental_Modules_(Biological_Chemistry)/Proteins/Protein_Structure/Secondary_Structure%3A_-Pleated_Sheet)

This seems intuitive, but my issue arises when considering some orbital geometry: in a peptide bond, the $\ce{C}$, $\ce{N}$ and $\ce{O}$ have orbitals with ${sp^2}$ hybridization, meaning that bond pairs/lone pairs are organized in a trigonal planar orientation around each of those atoms. As a consequence of this, one can also observe that all the atoms illustrated in the diagram should lie on the same plane, making things rather easy to visualize.

However, if one considers that the 2 lone pairs and one bond pair in the $\ce{O}$ atoms are orientated in a trigonal planar fashion, then shouldn't the ideal, strongest, H-bond is orientated at an angle (specifically $\pu{{60}^\circ}$) relative to the $\ce{C=O}$ bond? Now, if I observe the diagram again, it seems this $\pu{{60}^\circ}$ H-bond angle is better fulfilled in the parallel strand than in the antiparallel one. So shouldn't the H-bond in the parallel strand, theoretically, be stronger?

They are probably not. The difference is small, and depends on sequence context. Also, the diagrams do not reflect the typical conformation of the backbone in beta sheets. To complicate matters, most sheets are mixed rather than purely parallel or anti-parallel, and many are irregular (different length of strands, bulges, one strand part of two sheets etc).

"hydrogen bonds are aligned directly opposite each other, making for stronger and more stable bonds."

No, the geometry around the hydrogen bond is fairly similar. Here is a depiction of structures from an ab initio study showing the geometry: 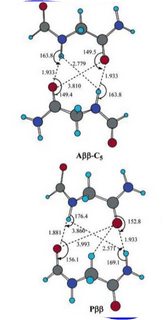 [OP ..] shouldn't the ideal, strongest, H-bond is orientated at an angle (specifically 60∘) relative to the C=O bond?

Based on analyzing known structures with a single hydrogen bond for a given acceptor, the hydrogen lies in the plane of the carbonyl group but has a fairly smooth distribution with many examples having a 180 degree angle (carbonyl carbon, carbonyl oxygen, hydrogen).

[OP in comments] Is there some possibility that this concept is an oversimplification to explain some other biochemistry phenomena?

The question whether parallel or antiparallel sheets are more stable is complex and ill-defined. The two possibilities require very different connections between the strands, so it is impossible to separate questions of secondary structure from questions of super-secondard and tertiary structure.

In a paper from 2011, the authors Tsutsumi and Otaki state:

We found that anti-parallel sheets occupied 61.0% of the β-sheet samples, and parallel sheets occupied only 14.9%. The mixed sheets were 24.2% of the β-sheet samples. Using a Boltzman-kind of argument interpreting this small difference (4-fold preference) in terms of an energy, you would calculate an energy difference of 3 kJ/mol or so for the entire sheet. This preference, however, might easily be due to questions of folding or the stability of the parts of the structure connecting the sheets, or some other factor. Proteins do not evolve to be of highest stability, anyway, so it is not clear how function plays into the selected structures.

One system where you avoid some of the complexity is the aggregation of particles with beta strands exposed to solvent. For example, there is a study on amyloid aggregation which shows that changing the side chains can drive either parallel or antiparallel arrangement. In another system far way from sheets in globular proteins, cyclic peptides aggregated in a parallel or antiparallel fashion.

So the problem is ill-defined and conclusions might depend on the specific system under investigation. The preponderance of some sheet topologies over others in globular proteins of known structure noted by Jane Richardson in 1977 might be a result not of differences in stability but rather aspects of super-secondary and tertiary structure. So it is not clear whether a general statement about distinct stabilities has merit; the simple explanation given in textbooks certainly does not.

2
Lewis structures of H₂(C)xCH₂ molecules
3
Electron Pair Geometry in Ibuprofen (Electron Pair Geometry in Organic Compounds)
16
Do MO's span a bond or the whole molecule?
3
Why is this β hydrogen in trans position to the leaving group?
2
Bond order of H2O and NH3 using group theory to construct MOs
2
Is a beta pleated parallel sheet always formed from more than one peptide?
1
Why hydrogen bonds are stronger than Van der Waals forces?
4
Can two noble gases attract each other?
1
Lewis structure of XeF2 that comes closer to reality?