Why does fusing benzene rings not produce polycyclic alkynes?

It would make sense that when the benzene rings are fused they keep their pi bonds and form a polycyclic alkyne. However this is not the case.

However with 7 benzene rings fused in a hexagonal tiling type fashion the center ring has all single bonds like cyclohexane.

Why is it that fusing benzene or really any aromatic compound does not form polycyclic alkynes? 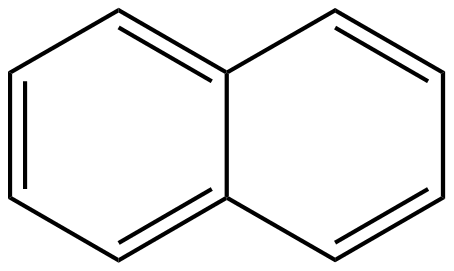 A resonance structure of this would be a polycyclic alkyne along with just the regular pi bond delocalization.

Bicyclo[4.4.0]deca-1,3,6,8,tetraene-4-yne is what I am thinking about. I am moving just the pi bonds in the resonance structure to get this. I am not moving actual carbon nuclei.

I can't find a picture of this but hopefully from the name you can figure it out.

The ideal bond angles for alkynes are $180^{\circ}$, which is necessary for optimal overlap of atomic orbitals combining to produce mutually perpendicular $\pi$-type molecular orbitals. Any significant deviation from this is normally inherently destabilizing. Rings, by the very nature of their geometry, often incur additional strain due to their conformational inflexibility and possible demands for non-ideal bond angles (relative to acyclic molecules, that is). Introducing $\pi$-bonds into rings can potentially compound this problem, since they force at least local planarity and shorter bond lengths. These factors all contribute to the immense instability of cyclic alkynes in general.

When you mention stable cycloalkynes, keep in mind that stability is a relative term in this context. While those with a sufficient number of carbons can be produced and isolated under specific experimental conditions, they are not thermodynamically stable relative to their open-chain equivalents, or to most of their various possible structural isomers. In some cases, they can, however, be made kinetically stable by the addition of flanking $\alpha$-substituents which inhibit reaction by their steric bulk1.

Syntheses of cycloalkynes below cyclooctyne are often elaborate, and frequently proceed through extremely reactive intermediates that decompose by specific reaction pathways so as to carefully avoid other products. Benzene (and the various polycyclic aromatic hydrocarbons, for that matter), on the other hand, is an extremely stable molecule which participates in quite a limited collection of reactions. Whatever particular reaction you're suggesting would almost certainly be hugely uphill in energy (i.e., yields a significantly less stable product), and hence very thermodynamically disfavored; it would also certainly have immense kinetic barriers as well (since any such reaction pathway implies at least temporary loss of aromaticity in the transition state[s] and intermediate[s]).

1. For example, 3,3,7,7-tetramethylcycloheptyne, a good description of which (and synthetic scheme for) is given in Strained Hydrocarbons by Dodziuk.

If a polycyclic aromatic compound were to ring open, an allene would be the initial, symmetry-allowed, ring-opened product instead of an alkyne.

I've built a Dreiding model of the bis-allene product derived from naphthalene and it does not appear to be particularly strained. I suspect the reason we do not see this process occurring is because the starting polycyclic aromatic is highly (resonance) stabilized, whereas the bis-allene product, while not strained, has no resonance stabilization due to the lack of pi-overlap in the cyclic structure due to the orthogonality imposed by the allene units. In other words, the activation energy would be too high and the reaction would not proceed. However, if we were to pass naphthalene through a tube furnace at very high temperature (this has been done), it would be interesting to see if any of the resultant products could be explained on the basis of the bis-allene intermediate.

EDIT Here's the bicyco[4.4.0] skeleton. Using these numbers tell me where you want the 4 double and 1 triple bond.

Ah, so this (the structure on the right) is what you mean! There are 2 issues with it

3
Does aniline breakdown in groundwater produce benzene
11
Electrophilic substitution on disubstituted benzene rings
8
Which of these carbocations are more stable?
25
How does the cyclopropyl group influence conjugation and aromaticity?
5
How does the Wurtz reaction produce alkynes?
9
Bond lengths in naphthalene