Regioselectivity of electrophilic addition of Halogen and Water (Halohydrin) on Alkenes?

I am currently studying for an organic chemistry exam and I just couldn't come up with a solution to the following question:

Consider the reaction of 1-Propene + Br2 with water as solvent.

Why will the nucleophilic water molecule add on C-2 and rather than on C1 of the Bromonium-Ion? The answer seems to be, because in the transition state the bonding between Br and C will dissociate quicker than the bonding between O and C will form, which leads to a positive charge on that C-Atom in the transition state and therefore water will add on the more stable "carbokation-like" carbon. My question is: why does the Br-C bonding dissociate quicker than the O-C bonding forms? (I read that in the pearson organic chemistry textbook). Does it have anything to do with the Hammond-postulate? Or are there any other thermodynamic or kinetics reasons? So I am basically searching for an explanation why one bond would dissociate quicker than a different bond would associate, because I guess that's the reason why there is a partial positive charge that would then be more stable on the higher substituted carbon...

Unfortunately I haven't found an answer on the internet yet and also not in other textbooks. Maybe you can help :) Thanks! 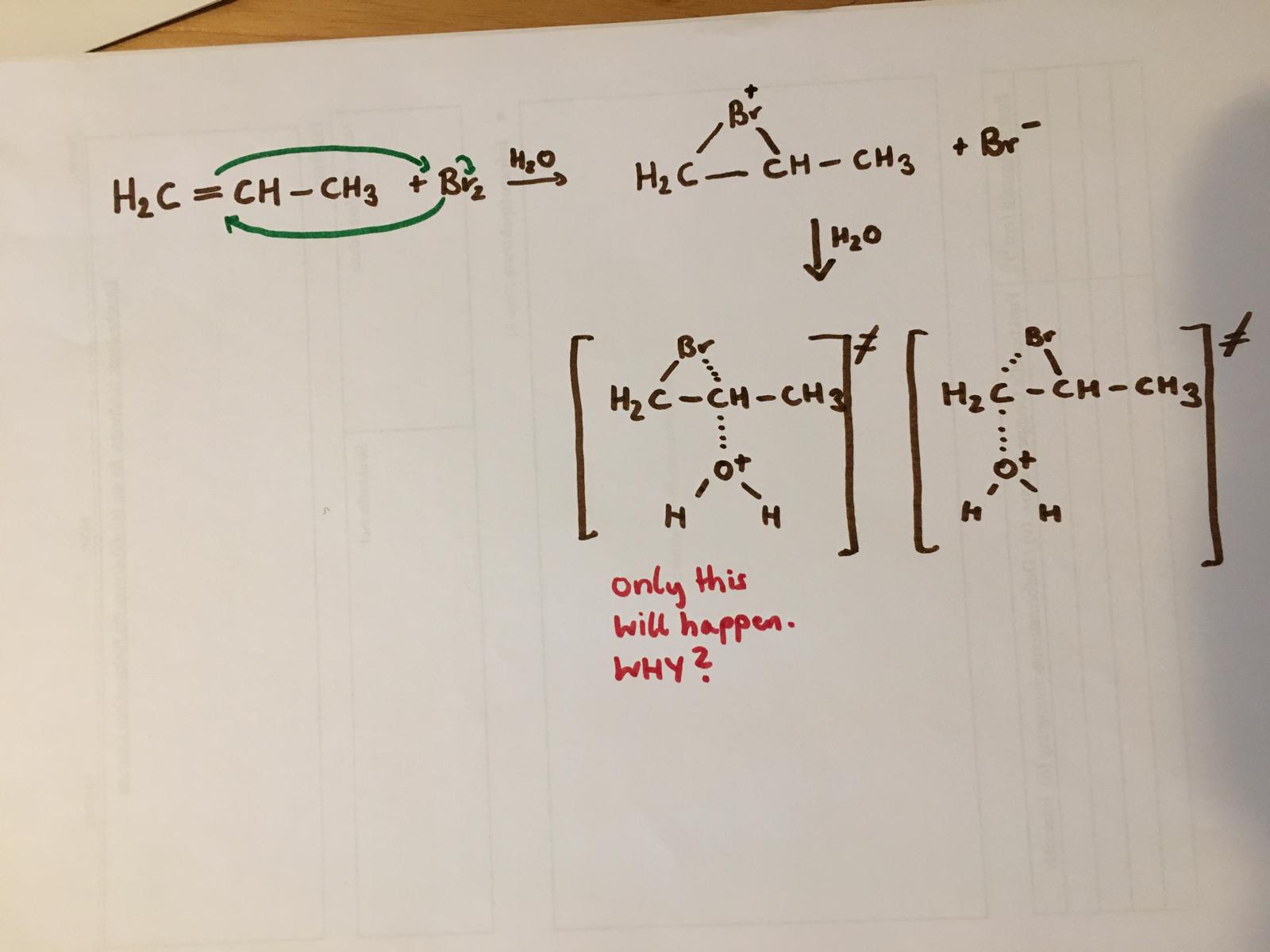 This is not a 100% answer, but it was too detailed to fit in the comment section.

Following up from the comment, here's a reference from Inorganic Chemistry by Morrison and Boyd:

There is evidence, of a kind we are not prepared to go into here, that these compounds are not formed by addition of preformed hypohalous acid, $\ce{HOX}$, but by reaction of the alkene with, successively, halogen and water.

Halogen adds (Step 1) to form the halonium ion; this then reacts, in part, not with the bromide ion, but with water (Step 2) to yield the protonated alcohol.

Propylene gives the chlorohydrin in which chlorine is attached to the terminal carbon. This is typical behaviour for an unsymmetrical alkene; orientation follows markovnikov's rule, with positive halogen going to the same carbon that the hydrogen of a protic reagent would. Now, this orientation would be perfectly understandable if the intermediate were an open carbocation: the initial addition of halogen yields the more stable carbocation - secondary, in the case of propylene. But the stereochemistry indicates that the intermediate is not an open carbocation, but a cyclic halonium ion.

And that's all. Quite anticlimatic, as I was expecting a reason for the regioselectivity. Most other references and papers I have seen online also do not have a concrete explanation for the regioselectivity, and they resort to hand-wavy explanations involving resonance for the same. This reaction mechanism is also quite similar to Oxymercuration-demercuration, whose regioselectivity is again explained by the "three resonating structures". I could not find diagrams of these resonating structures, and while this question asks the same, the resonance structures or the intermediate are not properly explained in the answer.

My best suggestion for you would be to accept the explanation in your textbook as that is adequate for now. Until someone more knowledgable posts a better answer with references, that should suffice.

Not the answer you're looking for? Browse other questions tagged organic-chemistry regioselectivity c-c-addition or ask your own question.