without using electronegativity, which one of these molecules is polar? [closed]

If we are given 5 molecules without their electronegativity

How to determine that one of them is polar or not ?

When we say something is polar, it has a very specific meaning. It means that there is a spatial separation of charges, or a dipole moment. In the simplest case, this is given by:

Where $\mu$ is the dipole moment, $Q$ is the charge on each pole (equal and opposite) and $r$ is the distance between the charges.

Anything with charges can have a dipole moment, and therefore be polar. In chemistry, we typically worry about whether or not two things are polar:

All bonds between two atoms are polar, unless the atoms are identical.

(This is including whatever else the atoms may be bonded to). The only question after that is "how polar is the bond," and that is where tables of electronegativity come in. Using an arbitrarily defined scale, we can measure the relative polarity of bonds by comparing the difference in electronegativity between the two elements.

For molecules, polarity isn't quite so simple. We know that all bonds between dissimilar atoms are polar, but in a molecule, sometimes the dipole moments add up to form a net dipole moment of zero. This is a little bit difficult to explain if you don't have a mathematics and physics background that includes vectors and summations of forces/moments.

If you do, then when I say something like:

It will make sense to you. If you don't, then you have to get a little more creative. I tell my students to imagine that there are ropes connecting each outer molecule to the central molecule, along each bond. Then imagine pulling each rope towards the side that is more electronegative (has a higher electron density). The more polar the bond, the harder you pull on the rope. Then imagine whether the molecule moves. If the forces balance, it stays put, so the net dipole moment is zero and it is not polar. If it does move, there was a net dipole moment, so it is polar.

This works pretty well - as long as you can visualize the molecular geometry. That's the hard part. To know how the bonds are oriented in space, you have to have a strong grasp of Lewis structures and VSEPR theory. Assuming you do, you can look at the structure of each one and decide if it is polar or not - whether or not you know the individual atom electronegativity. This is because you know that all bonds between dissimilar elements are polar, and in these particular examples, it doesn't matter which direction the dipole moment vectors are pointing (out or in).

Let's look at each one, using wikipedia's geometric pictures. 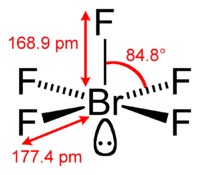 As you can see, there is a lone pair at the bottom (this is a square pyramidal geometry). The net dipole moment will be pointing "up", which makes this a polar molecule.

This one has a trigonal bipyramidal geometry, with each bond symmetrically opposed to each of the others. If you add up the vectors, they result in a net dipole moment of zero. Therefore, it is non-polar.

EDIT: As ron points out in the comments below, this is not really a binary molecular compound, and in reality forms an ionic crystal structure with $\ce{PBr4+}$ and $\ce{Br-}$. I don't think the author of the question intended you to worry about that, but if they did, the answer is still "non polar," although we wouldn't really call it a "molecule" any more.

Carbon tetrachloride has a tetrahedral geometry, and all the dipole moment vectors cancel. Therefore, it is non-polar.

This one is linear - no net dipole moment, so it is non-polar.

I could only find the ball-and-stick model for this one. It is square planar - there is a lone pair of electrons (not shown) on each "face" of the square on Xe. There is no net dipole moment, so it is also non-polar.

To review the steps:

Consider carbon dioxide - which has the elements carbon and oxygen in its composition. The EN of carbon is 2.5; the EN of oxygen is 3.5. Clearly, there is a big difference in electronegativity, which suggests that the oxygens are isolating electron density away from the carbon.

As we can see in the above picture, the two permanent dipoles cancel each other out since they are equal in magnitude and opposite in direction. So carbon dioxide might have elements of great difference in EN, but is still non-polar.

Now apply this knowledge to your problem. To determine molecular geometries, understand that both electrons and attached atoms influence geometry. Try looking up and applying the AXE method. I will leave my answer at here for now, since you have not shown much work in tackling this problem.

Not the answer you're looking for? Browse other questions tagged polarity or ask your own question.

4
Does resonance affect the polarity of the molecule?
14
Why is carbon dioxide nonpolar?
1
In which of the following compounds does Cl have the most positive partial charge?
2
Relationship between dipole moment of a molecule and electronegativities of constituent atoms
4
What is the most polar covalent bond?
2
Why does a molecule with a Thiol group form Hydrogen bonds?
1
Why are Tyrosine and Tryptophan considered hydrophobic?
0
How do compounds consisting of polar molecules dissolve?