How does heat transfer between molecules happen in deep?

A is the surrounding and B is the microscopic view of the walls of container ( Since there is some thickness of container walls and we can say that there are molecules present there ).

Average kinetic energy of hot water will be more than cold water.So it applies more force on walls of container than by cold water.

I hope I have written the things clear till here.

Q1 Is it that the walls container will be pushed by B towards right side and not left side ? Because there is more force by Hot water and not cold water.

Q2 Does heat get transferred here because the Average kinetic Energy of the walls of container will increase due to force of A on B? And those will put the molecules inside B into motion which will further put water molecules into movement and therefore making heat transfer ?

Q3 Does heat transfer happen only because of this displacement?

HAVE I WRITTEN THE MEHTOD OF HEAT TRANSFER?IF NOT, THEN PLEASE HELP IN CORRECTING ME.

I am trying to make my self understand heat transfer in details. Please tell if how can I improve the quality of my question if not good. 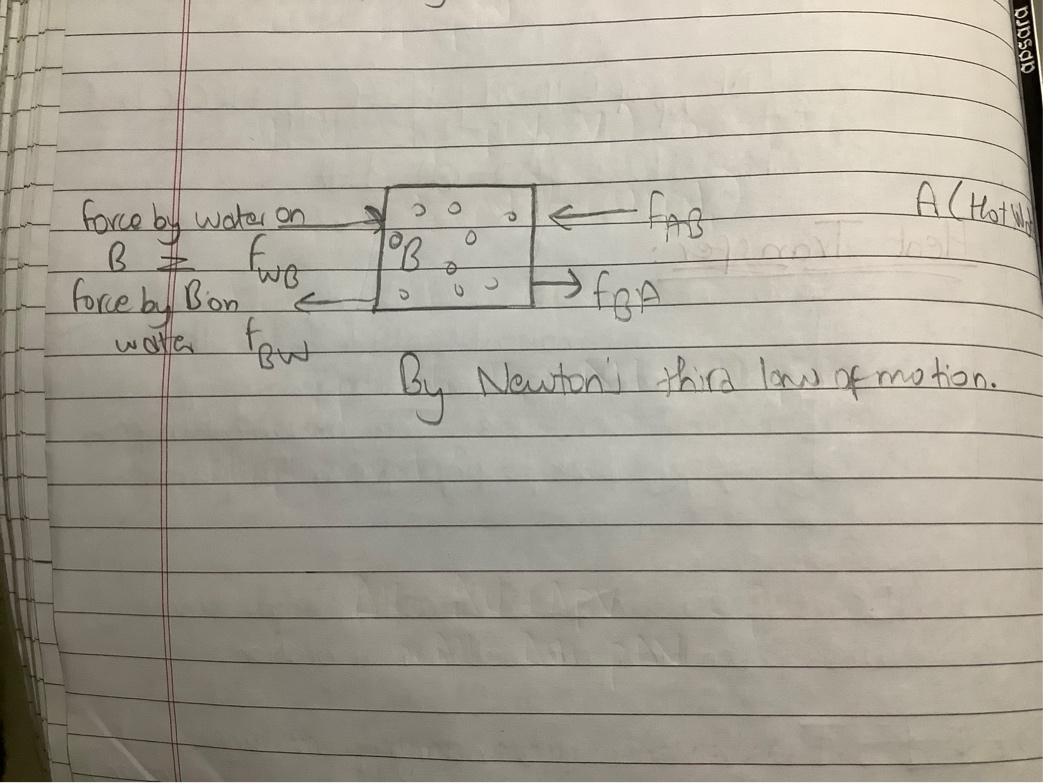 A2a: If the wall initial temperature was the cold water temperature, then yes. Otherwise no, as the mean kinetic energy of wall molecules can generally goes both ways, depending on initial temperatures of air, wall and water, weighted by air and water thermal capacity a conductivity.

A3: No, as there is no displacement. Hot air with in average more energetic molecules causes stronger vibrations of wall molecules, which cause faster motion of water molecules.

Imagine the whole scenario in more familiar macro world. 2 boxes of ideally elastic balls in gravityless ISS station, separated by a wall of balls interconnected by elastic strings holding all of them at their place. Now, balls in one of boxes move faster. What will happen during the time ?

But pressure is not essential for molecular mechanism of heat transfer.

Molecules of matter at given temperature do not have the same speed and kinetic energy. During their collisions, it fluctuates all the time. What is constant is their mean value.

For monoatomic ideal gas, the mean kinetic energy of 1 mole of the gas is $E_\mathrm{k}=3/2RT$, where R is the universal gas constant about 8.314 J/K/mol. The speed distribution follows the Maxwell-Boltzmann distribution.

It means that for given kinetic energy and speed of a molecule, we cannot say what is the temperature of matter the molecule belongs.

When 2 different regions of matter have different temperature, they exchange heat, what means molecular kinetic energy.

Molecules from adjacent regions mutually exchange kinetic energy by random way by collisions. As by random collisions, they can both gain or lose the energy.

Molecules from both colder and warmer regions mutually both transfer and accept the energy. If temperatures are equal, their mean kinetic energy (*) is equal and the rates of energy flow are equal in both directions. If one region is warmer, the rate of passing energy is greater than the rate of accepting energy.

(*) It is more complicated, as more exactly, it means the mean kinetic energy per each way the molecule can move, called degree of freedom. But the above is still valid for monoatomic gases.

Not the answer you're looking for? Browse other questions tagged physical-chemistry thermodynamics everyday-chemistry energy heat or ask your own question.

1
Does the speed of an ion affect the current that can flow through a solution?
4
Thermochemistry: forms of energy & pressure
4
How is heat physically released in an exothermic process?
1
How does refrigerator actually work?